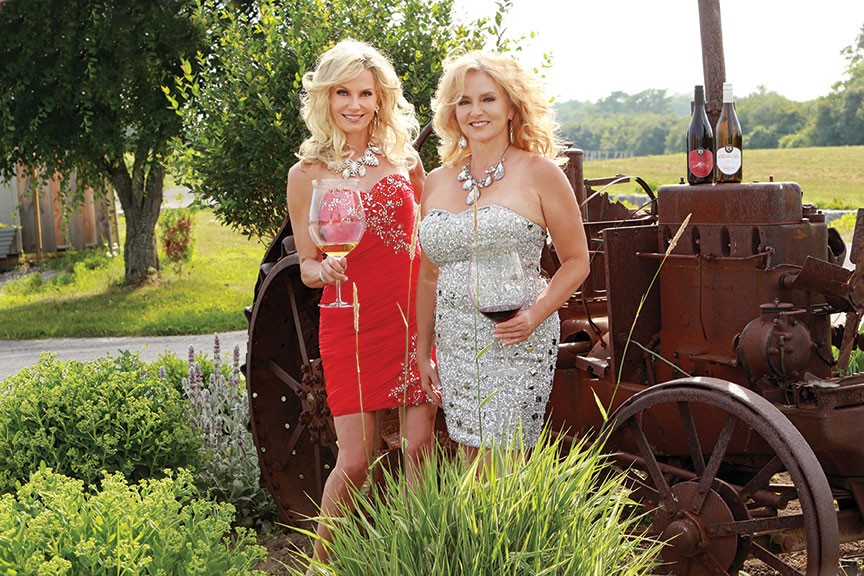 The Wine Ladies, Georgia and Susanne, founded by an entrepreneur sister team in 2003, take life one sip at a time as they share the splendour of food and wine and the wonderful lifestyle it entails. Hosts of their own TV show ‘One Sip At A Time – Adventures Around The Globe’ as well as their own weekly radio show about wine, food and lifestyle. These ladies share their passion and live life to the fullest and without hesitation. Their motto “everything in life somehow comes back to the vine” keeps their audiences entertained and informed. Here on the pages that follow The Wine Ladies detail a couple of their recent wine discoveries in two of Ontario’s wine growing regions, Prince Edward County, the newest, and the most established wine region, the Niagara Peninsula.

Prince Edward County…a day in the county – a promised land for elegant, seductive wines tinged with limestone and an undeniable minerality. “It’s due to the dirt,” the locals say. Prince Edward County, Ontario’s newest wine region established in 2007 sits on a limestone plateau made up of billions of sea-creature fossils. It’s an integral part of this region, a composite of the land, the climate, and of its’ people. Located just 2.5 hours east of Toronto, this island, surrounded by Lake Ontario and the Bay of Quinte is already routinely producing award-winning wines. Endearing and picturesque, the landscape remains quaint and quite rural, albeit with a sophisticated slant, due to a plethora of celebrity chefs, artists, and poets who have come to call the county their home. We visited one of our favorites for not only their wines, but the warmth and passion of the owners as well as the winery itself, with fabulous tasting room awash in natural light and a very cool overhanging light fixture crafted from intertwining old vines.
Rosehall Run is a winery to be reckoned with! Founded in 2001, partners Dan and Lynn Sullivan, along with brother-in-law Cam Reston, bought up this particular 150-acre farm due to its proximity to Lake Ontario and the remarkable Hillier clay soil sitting atop a limestone base. It starts “in the vineyard” as many a winemaker would say. Twenty-five acres of Rosehall Run’s estate vineyards now include plantings of winemaker Dan’s award-winning Pinot Noir and Chardonnay wines. As early as 2006 one of Canada’s top wine writers, David Lawrason featured Rosehall Run’s 2004 debut Pinot Noir as one of “Six wines that define Canada’s future”. Since then the accolades and awards keep on coming. Lynn and Dan, passionate about the county and their wines make a dynamic duo,

a force in Prince Edward County wine country, they are also the consummate ambassadors for the county’s culinary and cultural scene as well!
We selected two Rosehall Run JCR Vineyard wines, a tribute to co-founder John Campbell Reston, made from grapes sourced exclusively from 100% Estate Grown vineyards.
This wine offers an explosion of vibrant red fruit wafting out of the glass, cherry and raspberry on the nose, with notes of vanilla, wood and spice to follow. The wine is aged in French oak barrels for sixteen months, two-thirds of which are new. This Pinot Noir has length, good balance and is most pleasurable with its fruit, spice, crisp acidity, subtle tannins and county minerality.   It won the  Silver Award at the 2014 International Wine and Spirit Competition (IWSC) and the Gold Medal at the 2014 WineAlign Wine Awards NWAC.  It is available at Vintages #326504, as well as at the winery and online at www.rosehallrun.com for $39.00.
With the Chardonnay grapes sourced from Rosehall Run’s oldest vines planted in 2001 and 2002, these wines clearly define the unique and distinctive Prince Edward County terroir. The 2012 JCR Vineyard Chardonnay was fermented and matured entirely in 500 litre French oak puncheons for 16 months, alas the power of the fruit with its vibrant intensity allows the oak to play a most suitable yet stellar supporting role. The wine is rich and complex, beautifully aromatic with tropical notes and a backbone of spicy baked apple, citrus and county minerality and with great length.  Vintages  #326512, also available at the winery or on-line at www.rosehallrun.com for $29.95.
The Niagara Peninsula

The Niagara Peninsula, an absolutely beautiful wine-growing region, is also Ontario’s most established. The region hugs the southwestern shore of Lake Ontario and enjoys the majesty of the Niagara escarpment to the south-west of the story book town of Niagara- on- the- Lake.  The appellation, or Designated Viticultural Area (DVA) boasts stunning vistas with close to eighty-five VQA wineries dotting the landscape, most of which are producing award winning wines and offering the visitor a world class country destination.
The appellation characterized by rich, fertile soils with a diversity of terroir and unique microclimates has resulted in the further determination of ten sub-appellations, offering up a great variety of wines of differing styles to us the consumer and wine lover! How difficult it was for us to select just one winery on this day to pay a visit, alas our hearts and taste buds are won over by a trio of brothers, the Speck brothers, all co-owners of family owned and operated Henry of Pelham Family Estate Winery.
As the story goes, back in 1984 there were more than a few doubting Tom’s in the Niagara Peninsula as to what the three brothers, along with their father were preparing to do, that was to pull out all their Concord and Niagara grapes and replant with vitis vinifera grapes such as Riesling and Chardonnay. “People thought we were crazy” say Paul, Matthew and Daniel “they said they would never grow”. Well the proof is in the award winning wines today of Henry of Pelham Family Estate Winery, where the three brothers have expanded their holdings to a total of 300 acres of forest and vineyard land all in the premium Short Hills Bench sub-appellation of the Niagara Escarpment. (The Niagara Peninsula is divided into two regional appellations; The Niagara Escarpment and Niagara-on-the-Lake)

On our visit we enjoyed two wines of the Speck brothers latest wine venture, a new line recently introduced called Silver Bay Cellars. Here is how they describe the wines and their sense of place: the locals’ place, where the vineyard meets the beach.
“The Niagara Peninsula’s sandy shoreline separates water to the south, east and north. Where the gentle breeze flickers through the leaves of the silver oak trees lining the beach, the locals call it ‘Silver Bay’ — where we take in the sun, have bonfires and celebrate the isle of style and pleasant living. Silver Bay is our home away from home, in our own backyard.”
The Silver Bay Cellars VQA 2003 Pinot Noir, is a medium bodied deep ruby red in colour with an aroma of red cherries, a touch of vanilla and a hint of earthy notes, on the palate it is dry with raspberry and cherry remaining a delightful and delicious constant, with a dab of spice on the finish.   It’s available at the LCBO $14.95, #372789.
The Silver Bay Riesling Gewurztraminer has a medium body, is dry and fruity with an enticing aroma of peaches, melon and a hint of delicate floral notes. On the palate, delightfully fruity, the lovely peach persists and the wine finishes with touches of citrus, clean and delicious.  It’s available at the LCBO $13.95, #372771.
For more information visit www.silverbaycellars.ca.

Try it Before you Buy it

The Wine Ladies: The Marvels of Mediterranean Cuisine

Mr. Propeller is your friend