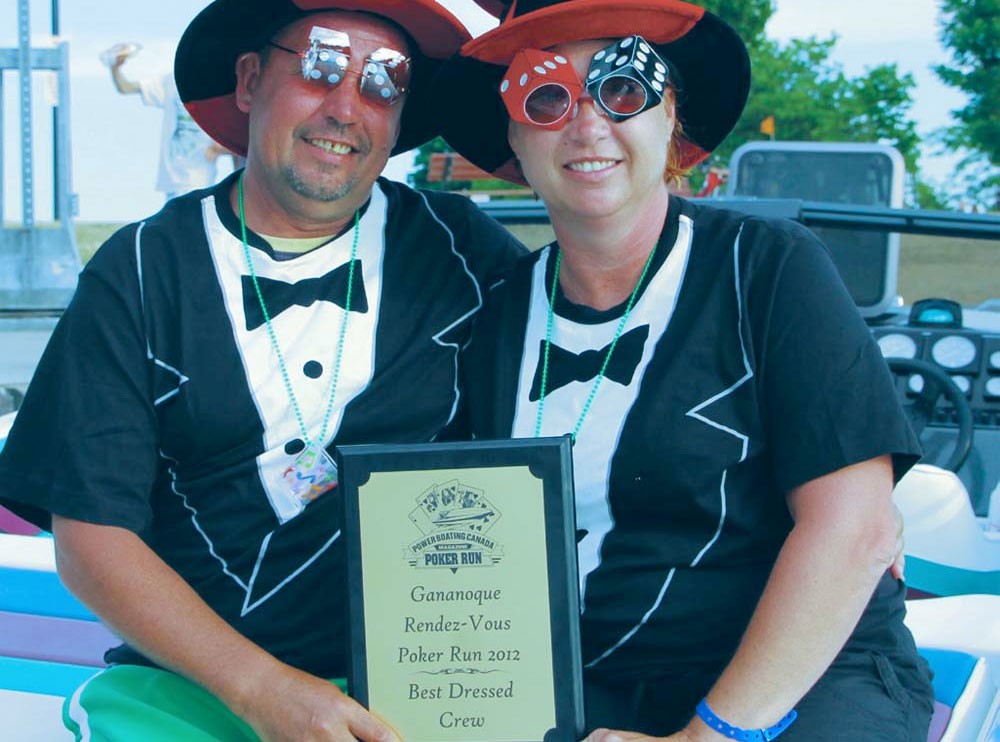 So I’m sitting in The Old English Pub in Gananoque, Ontario after a truly wonderful day on the water at the third annual Gananoque Rendezvous, and there are these sayings painted onto the walls up near the ceiling. All of the sayings were good, but the wording of this one stood out for some reason.
Maybe it was so timely and relevant because of the things that I’d experienced that day.
The day began with the advice I received around the registration table from a now-retired gentleman who arose early to drive his boat up the St. Lawrence River to the event. We got to chatting and he said: “I didn’t want to miss it. So I got up early, and even though the wife didn’t want to come this time, I did, so here I am!” The smile on his face said it all. We talked some more and I learned that his life was so filled with things he was clearly enjoying doing, that he mused about where the heck he ever found the time to work a full time job before he was retired.
As other registrants filed through, they shared fun stories and funnier memories of past events they had attended, and how they couldn’t wait for this day to come.
Once we were out on the water, I reflected on how good it felt to once again be free, to dance with the waves, to feel the wind in my hair, to hear the sweet hum of a well tuned engine. I thought: we need a transom sticker – that mimics ones I’ve seen on Jeeps – that reads: “It’s a boater thing, you wouldn’t understand.”
Then at the lunch stop, there was the conversation with one of the Rendez-vous participants who’d recently celebrated his 60th birthday. I was shocked to learn that fact honestly, because the enthusiasm in this persons’ speech, and the shine in their eyes, never mind the good shape their body was in, didn’t for one moment suggest early 50’s, never mind 60. As I listened more to the conversation, he said “It’s not how old you are, it’s how old you act.” Others at the table chimed in and added their two cents to the conversation in whole-hearted agreement. As we rose to head back out on the water, he summed it up this way: “If you want to have as much fun as the kids are having, you have to do what the kids are doing!!” Bam, it hit me! I thought, “Wow, he’s nothing more than a 60 year old kid!”
Finally, when the cards were all handed in, I had the good fortune to sit in the shade on a park bench overlooking the marina, and chat with a couple who were attending their very first Rendez-vous event. They’d traveled a good distance from home, their boat in tow, and shared how much they had looked forward to this day for many months, even though they really didn’t know what they were in for. Over and over again, both husband and wife retold their version of the day’s events and repeatedly said how much fun it was and how much they enjoyed themselves.
My point is not to sell you, dear reader, on participating in a Rendez-vous. That’s something you’ll have to decide for yourself. But rather my point is to reflect on the words in that saying in the pub: “One half of the troubles in this life can be traced to saying yes too quickly, and not saying no soon enough.”
The statement, in light of the days’ events, is only half accurate. It needs to be fleshed out a little to read: “One half of the troubles in this life can be traced to saying yes too quickly to some things, and not saying no soon enough to other things.”
See every one of the people in the above stories could have said yes to life’s responsibilities and therefore said no to coming to the event, and they’d have gotten the entire deal out of order.
How many of us say yes far too often to taking on more work? How many of us later regret that ‘spur-of-themoment’ decision and then wish we’d said no? (Don’t answer that.)
Now let’s ask the questions in reverse. How many times have you said yes to having more fun and regretted it? How many times have you said no to taking on more work, and later regretted it? (Again, don’t answer that.)
So as I sat there reflecting on the fact that every one of the people today said the right response to the right thing, and therefore kept themselves out of trouble, I thought what a fitting end to a fabulous day. And what great advice to follow to ensure that indeed all of our days in this Life Afloat are nothing short of fabulous.