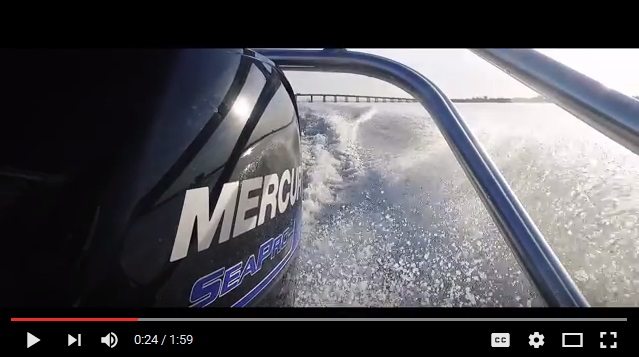 Boaters around the world are quickly realizing that Mercury Marine’s family of SeaPro FourStroke outboard engines are the perfect match for high-hour applications and harsh environments.
TowBoatUS, which operates more than 600 boats in the U.S., is making the investment into Mercury SeaPro outboards on some of its fleet, including one vessel in Ft. Myers, Florida.
See how TowBoatUS has partnered with Mercury Marine to provide longer engine life, power and performance necessary to get the job done in this new video.
“Having Mercury’s on the back, you never have to worry about breaking down,” said Captain Dan Medina of TowBoatUS. “They are just awesome engines.  You have that reliability and durability behind you, especially in a commercial application which means you won’t end up like that guy on the water; the guy you are going to help.”
Mercury’s new 40hp and 60hp SeaPro FourStroke engines complement the current 75, 90, 115, and 150hp SeaPro FourStroke engines that were released in 2015 and have accumulated thousands of hours in commercial markets around the world.
“With SeaPro we have not simply re-calibrated our existing product, we have made upgrades to enhance durability and performance and then tested those upgrades to withstand the harshest environments,” said Marty Bass, president of Mercury Marine Europe, Middle East and Africa.
“The secret is out of the bag, they will prove themselves,” said Medina. “We are one of the larger towers and you’ll see them on the back of our transoms more and more.”
SeaPro engines, with robust high displacement and lightweight design, deliver the performance required by commercial users and are validated to three times the engine durability of recreational engines. These new SeaPro engines also feature several engine improvements to increase durability and reliability including a commercial grade fuel pump, flywheel magnet retainer, more durable upper mounts, stainless steel thermostat, and an improved gas assist trim cylinder (on select models).
For more information visit www.mercurymarine.com/en/ca/engines/outboard/