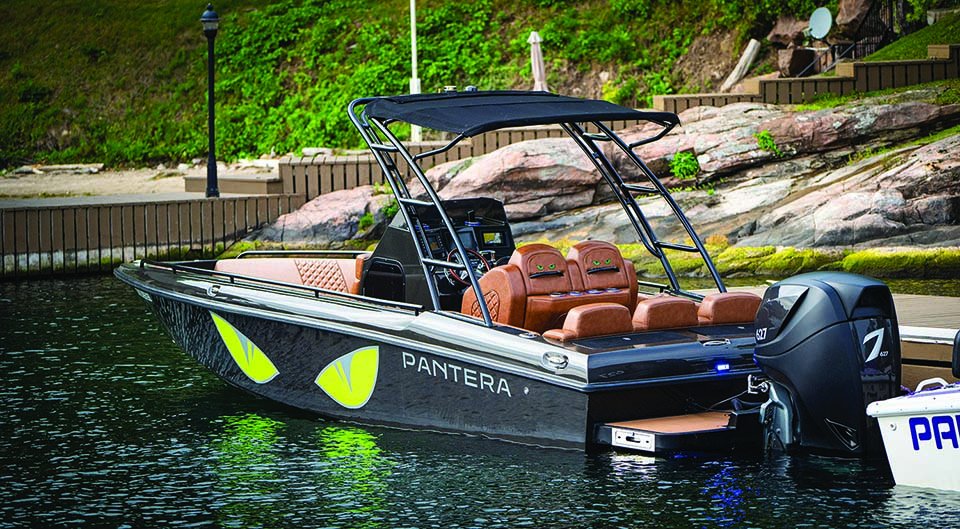 This season Pantera is building 24-38 foot boats. The new 28’ Center Console is a real wave crusher with a 24 degree dead rise and a variety of power options. To make sure no one mistakes their new demo model, Pantera has embroidered its signature green cat-eye logo on the helm seats. It helps identify the boat; just in case you missed the giant green eyes on the outside of the hull.

A build partnership has been formed with John Clarke from Jaguar Boats to give the new Pantera’s a fully custom-composite build. The new Pantera’s will have a layup schedule that has proven itself in the race circuits over the years. With Jack Clarke at the helm of building and racing the big catamarans- he came out on top with a string of National and World Championships since the mid 80’s- Jaguars process of building a boat is second to none. His passion started when he was 8 years old and his father Jack brought him into the boat building business. He learned by watching, working and competing in one of the most intense, pressure filled sporting environments from such a young age. In 1999, Jack and John Clarke raced a 40’ Jaguar taking the National title as a father-son team.

Pantera’s carbon fiber hull has also done an exquisite job on the interior. The seats and bolsters are finished in an embossed caramel brown material which contrasts nicely with the carbon grey hull. The metal hardware bow rail and arch are finished in black, and the helm console, like the hull, is exposed carbon fibre.

More options coming and available with your choice of power in either outboard or inboards. The boat can also be configured in a traditional or stepped hull and has manufacturing plans in both Canada and the United States, with Jaguar Marina handling the finishing duties.

It’s rare to see a builder offering a full carbon fibre boat, but for performance boats such as this, carbon fibre is strong, stiffer and lighter than fiberglass.

A Show Stopper! An in-depth look at Formula’s 500 SSC