Exploring the Trent-Severn Waterway by Houseboat 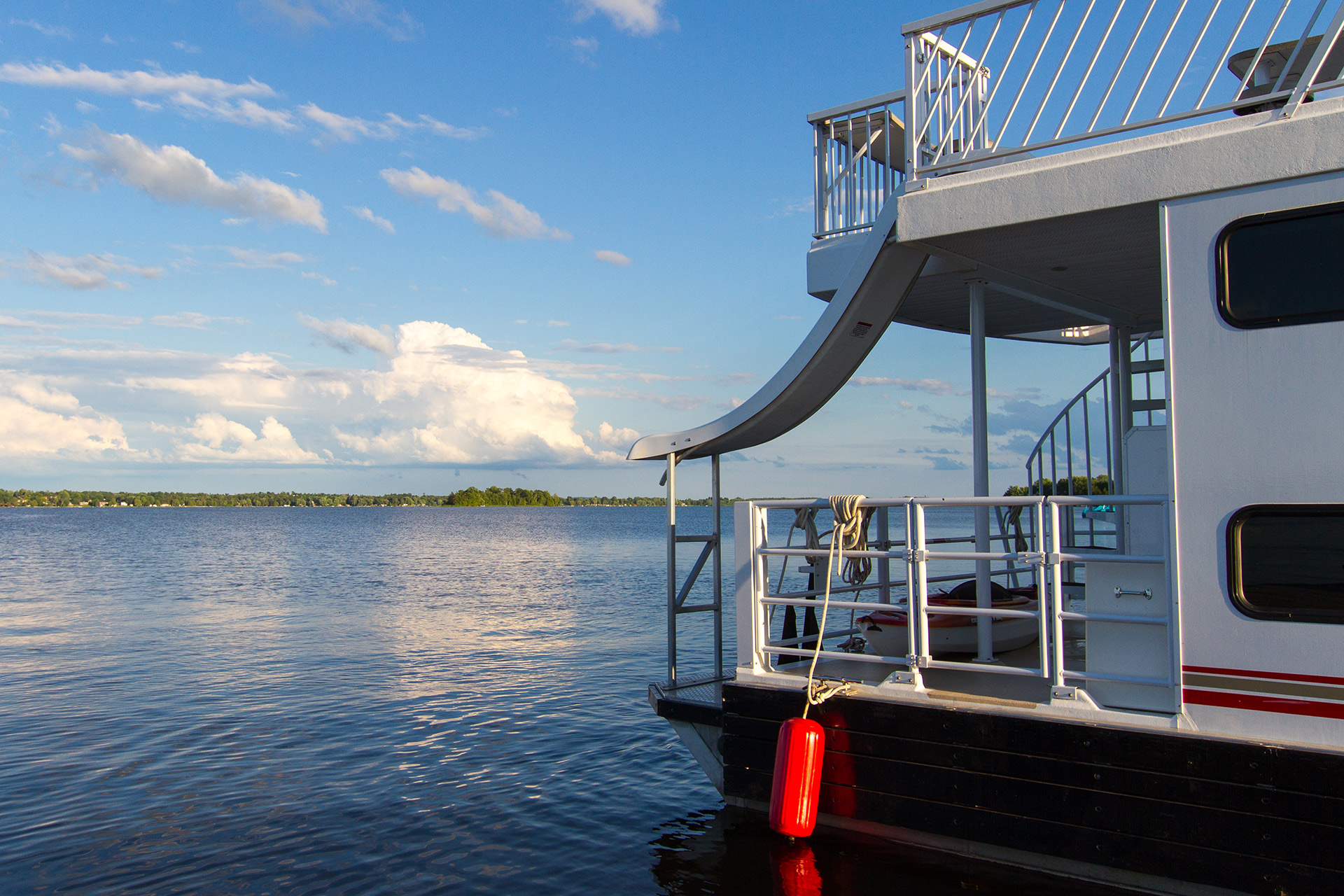 When I was four, my parents took my sister and I, along with my grandparents, on a houseboat trip along the Trent-Severn Waterway. I don’t remember any of it, save for a few vague impressions, which may have come from photographs. I can’t be sure. I am told I had a great time. It’s quite possible that the event sparked my lifelong love of boating.
When the opportunity presented itself this past June to spend four days on a houseboat touring the Kawartha Lakes during Canada’s 150th birthday celebration, I knew it was the perfect chance to recreate this childhood adventure, thirty-three years later.
Now my wife and I are the parents. Our oldest is two and the newest is five months. While younger than I was for my first houseboat adventure, it’s almost a certainty they won’t remember it, but I know they’ll have as much fun as I did. We’ll have plenty of photographs to remember the trip to them when they’re older. 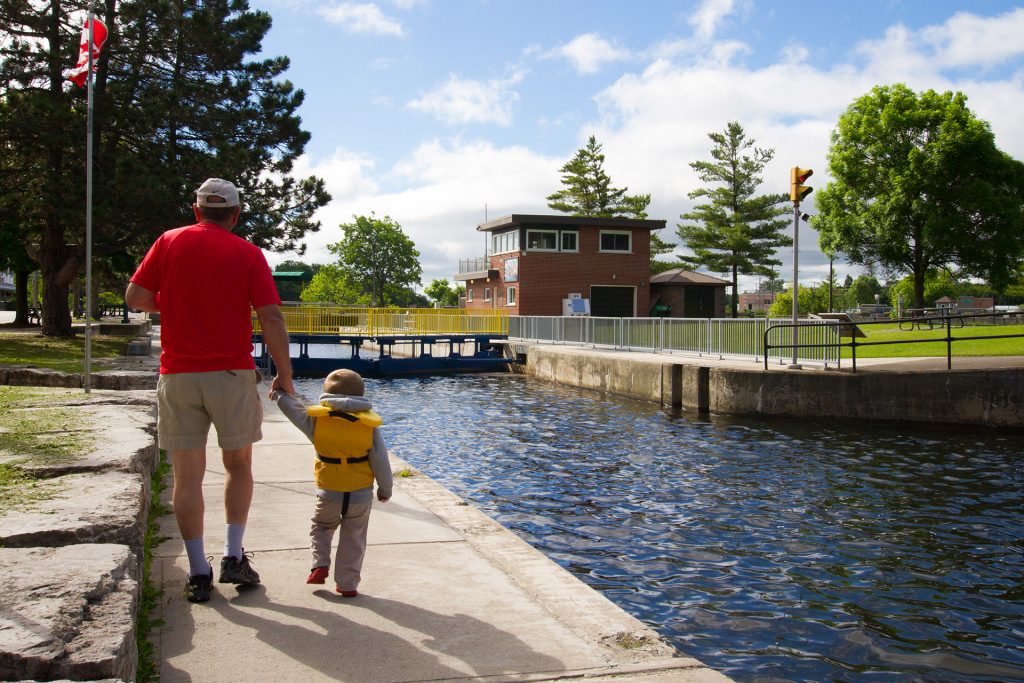 Of course, grandparents were also an important part of that original experience, so we invited my parents along to fill the role. Four days on a houseboat with their grandkids was an easy sell.
I’ve always had a preconception of a houseboat being a beat-up river barge with a plywood cabin nailed on deck. I don’t know how my first voyage on board a houseboat influenced my notions. I don’t remember the boat at all.
I did spend several years living on Pigeon Lake and recall seeing many houseboats. Most were simple pontoon hulls with a simple cabin constructed on top. Well-used, basic amenities and purely functional. A step up from the barges I envisioned, but not by much.
I don’t recall the details of the houseboat we rented back in 1984, but I doubt it was anything like the one we were enjoying on this trip. We were fortunate enough to take out ‘Happiness’, the newest, largest and most luxurious houseboat on the Kawartha Lakes. 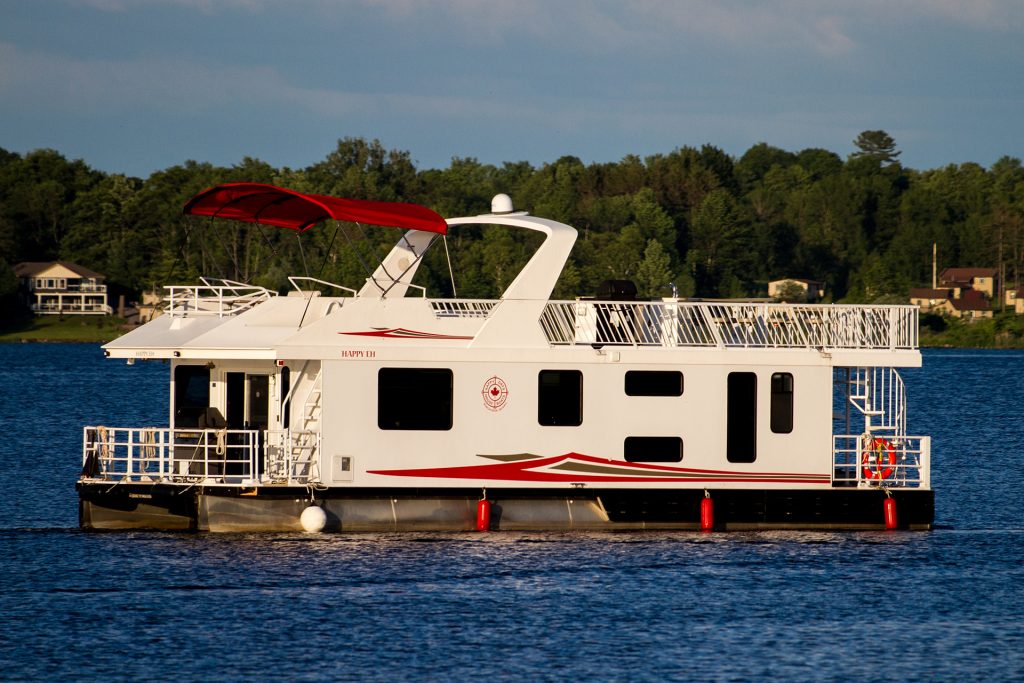 Times sure have changed. My preconceptions have been shattered. The first night aboard we watched the Blue Jays game on the high-definition surround sound entertainment system. We didn’t have that feature in 1984, but we did have a great Jays team that season. The rest of this 56-foot long floating condo was just as well-appointed as the entertainment system. We were eager to get this trip started.
We passed through the lock in Bobcaygeon mid-afternoon into Sturgeon Lake. We had originally planned to stop for lunch, but Fenelon Falls was three hours ahead of us and we wanted to be there in time for dinner.
The cruise across Sturgeon Lake was the longest stretch of open water on our trip. We had some wind and rain, which kept our activities indoors. I was happy we were on a large houseboat. I couldn’t imagine being in the cabin on an express cruiser with an energized and excited toddler. The openness of the houseboat gave my son room to play and burn off his energy.


We were in for a treat when we pulled into Fenelon Falls and moored on the lower side of the lock. We had our pick of spots, being the only boat present, so we naturally picked the one with the best view of the falls.
We’ve had a lot of rain in southern Ontario this summer. Water levels are unusually high, which gives a place like Fenelon Falls a little extra punch. It’s always a beautiful spot, but with the dam wide open, the volume of water rushing over the edge was impressive. 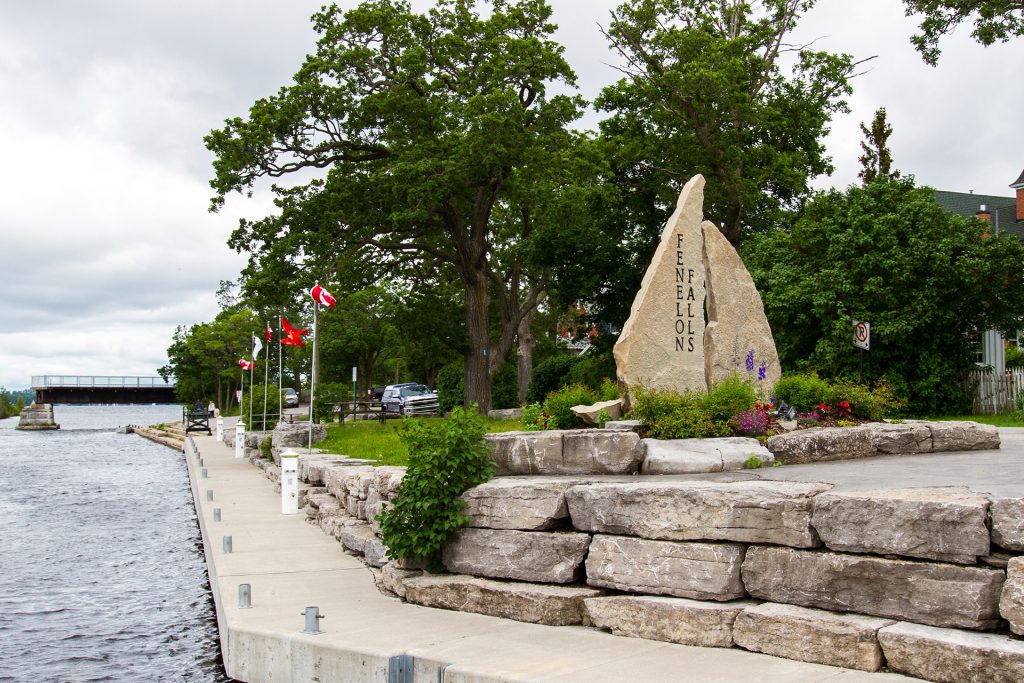 The noise from the falls was so loud, standing on the front deck of the houseboat, I couldn’t hear the generator running under full load. Noise levels that loud would normally be a detriment to sleeping, but there’s something innately peaceful about a waterfall. Falling asleep was easy.
We locked through first thing in the morning. The lock chamber at Fenelon Falls is spectacular; one of my favorites on the entire system. The original limestone walls towered over us as we slipped into the lock. It’s not unlike the feeling you get driving your car into a tunnel, with the fixed road bridge forming the roof over the canal.
Coming out the other side, into Cameron Lake, we pointed our houseboat towards the canal in Rosedale. Lock 35 in Rosedale is a peaceful place, especially after the bustle of Bobcaygeon and Fenelon Falls. The two busiest locks on the system. It’s also a small lock, rising just over a meter, a big difference from the 8-meter rise in Fenelon Falls. 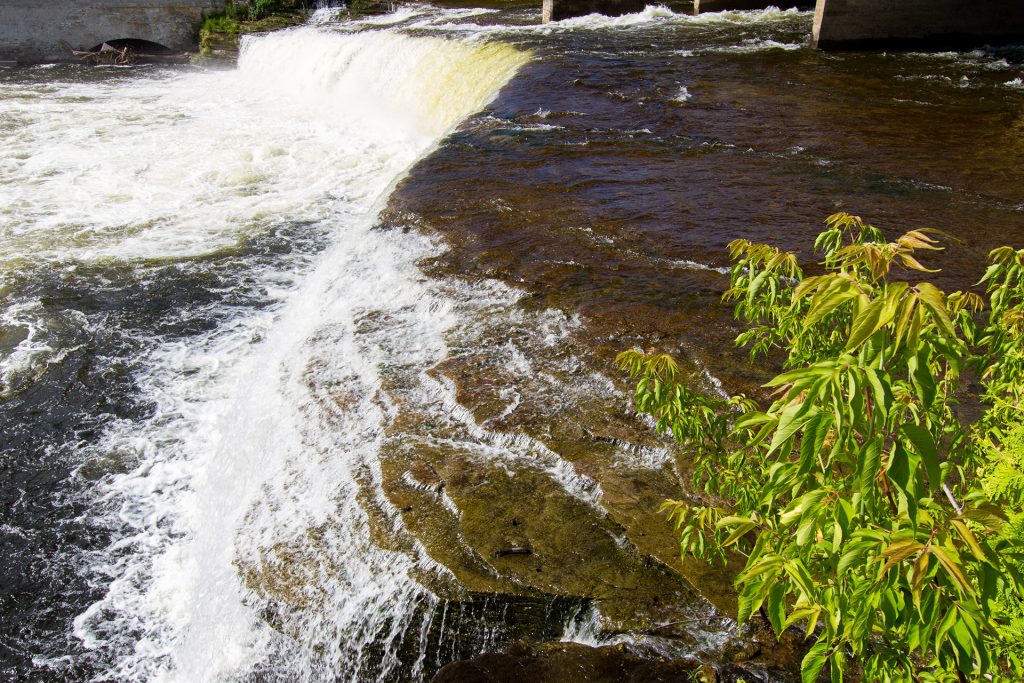 The canal at Rosedale leads into Balsam Lake, the figurative and literal highlight of our trip. On the pier in Coboconk is a sign indicating we’ve reached Canada’s Freshwater Summit. The highest point of freshwater in the country from where you can circumnavigate the globe without ever touching land. Naturally, we took a photo. We also picked up an ice cream for the kids.
Back on board, we spun the houseboat around in the narrow channel. Having reached the apex of our trip, it was time to begin the voyage back to Bobcaygeon.
We did capture a few hours of sunshine cruising back to Fenelon Falls. It gave us a chance to move the party to the upper deck. We’d yet to enjoy all the open space these houseboats have up top, so we took advantage. Compared to the luxury appointments of the cabin below, the upper deck is sparse, but it has everything we needed to enjoy a few hours of sun and prepare a meal.
The upper helm is also the best place to pilot this boat on the open water. The view from up top is spectacular and the canvas bimini top overhead keeps the pilot out of the direct sunlight. The top of the raised penthouse makes a great sun pad, and also an excellent place for the little ones to play with their toys. No chance of someone tripping over them if they were playing on the deck. 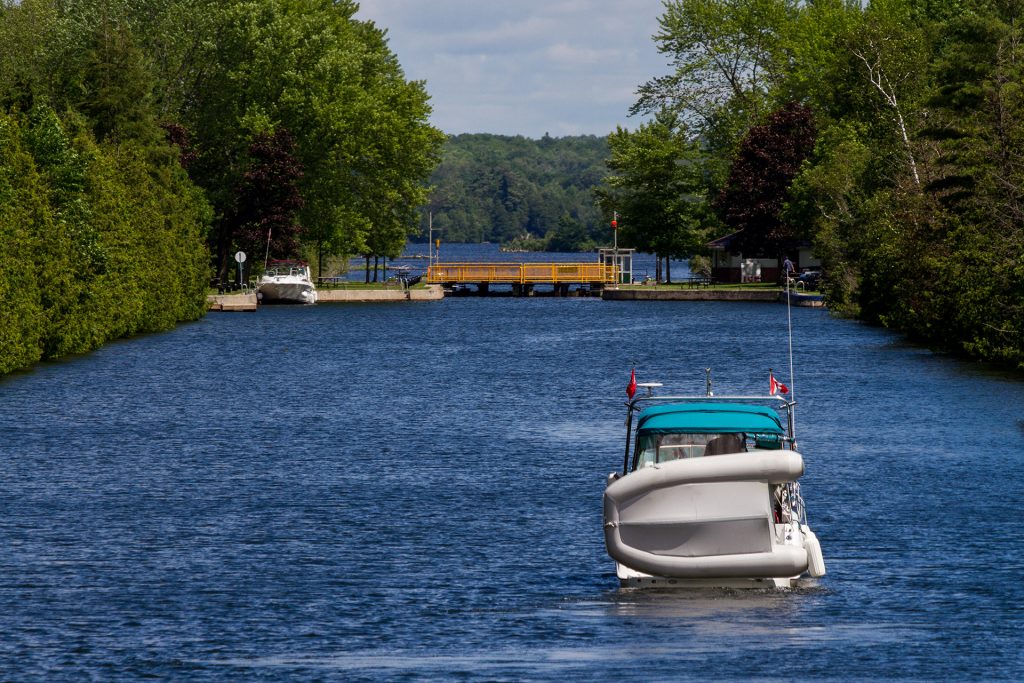 We spent the last night of our journey on the upper side of the lock in Fenelon Falls. There’s no view of the waterfall from here, but it was worth the short walk to see it again. We did have shore power on the topside, which gave us a chance to top up the batteries and run the dishwasher (yes, the boat has a full residential dishwasher) as we started to pack up our stuff in anticipation of disembarking the next day.
As we headed out of Fenelon Falls for our final leg, I began to reflect on the few short days we’d spent touring the Kawartha Lakes. We had a wonderful time. I don’t have the memories to do any kind of comparison, but I suspect I had more fun this time than I did thirty-three years ago, despite the much shorter trip.
I can’t imagine a better way to get out on the water and share real, quality time with the whole family. I have a feeling this won’t be the last time we get together on a houseboat to enjoy the natural beauty our great country has to offer.   Family, Houseboat, Rental

Garmin reminds boaters to stay safe on the water