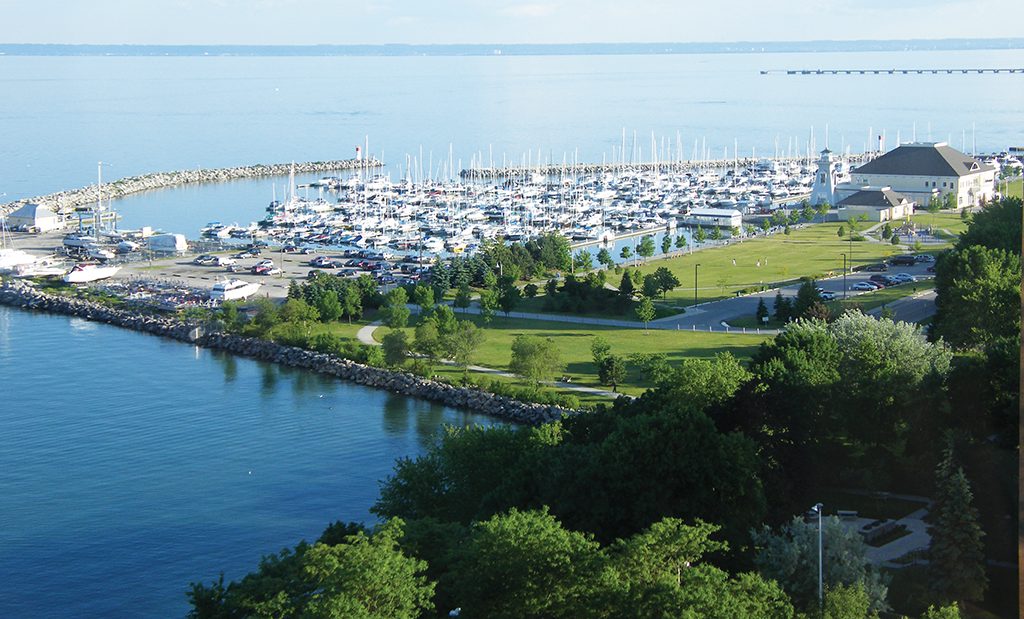 The Bronte Outer Harbour is An On-Water Escape Close to Town.

On the shore of Lake Ontario just west of Toronto lies the Village of Bronte in the Town of Oakville.  On the most southerly point you will find the Bronte Outer Harbour Marina.   It is a hidden jewel where boats from 20 to 70 feet tie up for the summer and enjoy a home away from home.  Just across the street you will find beautiful residential neighbourhoods which overlook the marina.  The main street is only a block or two away where you will find many restaurants, outdoor patios and shops which will make your visit to Bronte an experience to remember.

The village of Bronte was settled in 1834 and was predominantly a lumber and grain port and soon after a commercial fishing industry was established.  Over the next 100 years, many changes have taken place.  The generous gift of land by Mr. Hill,  is now referred to Waterfront Heritage Park on Ontario Street.  When the marina was tendered for private development of a marina, Find Christiansen had a vision to design, and build a marina.   Find Christiansen felt Oakville being a first class town deserved nothing but a first class marina to be built here.  Find grew up on the water and around boats in Denmark, and was excited to get this project underway where he could indulge in his passion.

Halton, Oakville, the Ontario and the Federal governments have oversight involvement, but it’s the Christiansen’s who built the Harbour Banquet Centre, the boaters facilities, the docks and all the amenities with their own private funds.   Find was very proud of what he had achieved which includes the wide stable docks protected behind the break wall which was already in place and projecting into Lake Ontario.    His wife Arlene took on the role of the administration of the marina and all related enterprises since inception and continues until present day.  Find passed away of an unexpected heart attack in 2009.

Access to the marina is through security gates where the boaters have free parking and easy access to the docks. Night security tours the dock to make sure that all is well, the boats are safe and that the boaters adhere to the rules and regulations of the BOHM and the Town.  The boaters privileges includes bathroom facilities with clean men’s and ladies showers.

There is a total of 400 slips in the marina and has the capacity to accommodate boats up to 70 feet in length and most slips are occupied by long term returning residents.  Transient docks are also available for boaters visiting from other ports of call.   Every slip has fresh water and shore power ranging from 15 to 50 amp service.  A large and easily accessible gas dock offers Shell’s regular and premium gasolines, as well as diesel fuel.  Pump out can be provided at the gas dock as well.  The friendly staff are always pleased to give a hand to boaters coming into the marina to provide instruction and help tie up.   The marina boasts two covered floating picnic docks that gives shelter for family and friends to get together and cook a meal on the supplied barbecues.

Alan, the Harbour Master, has worked at the marina for several years and manages it like his own.  He can be found quite often at the marina late in the evening attending to the boaters needs and any issues that may arise.  As he says, “whatever it takes”.   When emergency rescue situations arise on the lake, Alan will assist the Halton Marine Police when requested.   Anna Christiansen is the office manager and is the friendly and cheerful voice you hear when you visit or contact the marina.   This is a family venture and Anna has been involved in varying capacities in the company since the very beginning, and works to ensure the high standard of customer satisfaction.

The marina is very proud of their many awards over the years.   Some of the awards include an impressive 5-green leaf clean marina standing, and the Hamilton Spectators coveted 2016 Readers’ Choice award in the category of best marina, Ontario Field Ornithologist certificate for providing safe nesting for rare red necked grebes. 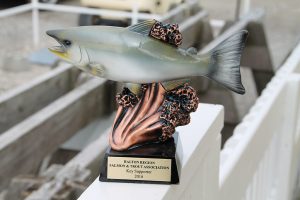 Bronte Outer Harbour marina is also recognized for volunteering the use of the marina to the Ontario Salmon Derby.  This begins with the  fish penning in March where students come to study and feed the fishlings, and ends with the weigh in and documentation of fish caught during the derby.

In July, everyone looks forward to the dingy race and barbecue with lots of great prizes and fun to be had. The marina also hosts an annual barbecue for its boaters during the summer as a nice get together and appreciation meet and greet.   Each year the marina hosts a marine safety day where the marine police, town fire department and related agencies provide complimentary vessel inspections and give guidance to what is required by regulation to have on board your boat.   The goal being that safe boating is practiced and maintained from year to year, season to season.

A huge fireworks display takes place from a barge in front of the marina every year, and continues to be a big draw for many people in the community to come and enjoy the spectacular display.   This year being our country’s 150th birthday celebration, the upcoming fireworks display will be nothing short of fantastic!

The Harbour Banquet and Conference Centre and the Compass Restaurant and Lakeside Grill also lies within the confines of the same property within the park.   Wedding receptions or celebrations or any other significant occasion is quite spectacular when overlooking the boats in the harbour and the wide vista of beautiful Lake Ontario.   On the ground floor of the property, there are the Lakeside Patio Grill as well as offices of the Halton Marine Police, Executive Yacht Co., Lifegoals Inc., and the Heatropy Design Inc.

Much of BOHM’s success can be attributed to following the golden rule in treating customers as they themselves would like to be treated.  Drop by and say hi to Alan or Anna and see what all we have to offer. You can visit their website at www.brontemarina.com.