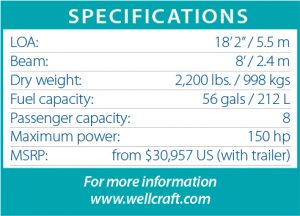 The Wellcraft brand is a name synon-ymous with both innovation and the resulting success in big water boats. So I was excited as I walked up to the Wellcraft 182 Fisherman test boat tied to the docks at the beautiful Deerhurst Resort this past fall. The fall leaves were just past their peak, and despite the gray overcast day, the bright sun coming through the cloud breaks lit up the shoreline hills in a splash of colour.
The black and lime green (officially called atomic green) hull with the familiar Scarab logo in vinyl graphics told me this model was equipped with the optional Scarab Offshore Package. The white and grey deck and interior was a nice match to the 150hp Yamaha out-board hanging off the transom.
At 18’ 2”, Wellcraft’s smallest model looks tight and compact, but has features you’d expect to find in larger boats. The rounded bow – versus a pointed one – adds to the stubby appearance. Inside the bow you’ll find an anchor locker with pop-up cleats, and our test boat had the optional bow seating package which included a large sunpad with comfortable seatbacks. One of the neatest features of this boat is the aerated livewell! It’s positioned on the centerline at the base of the bow seating and features an aquarium glass front so you – and the kids – can see all the fish inside without lifting the lid. Unique!
The forward-facing seat in front of the centre console is low to the floor and small – perfect for little people’s tiny butt cheeks. The seat lifted to reveal a porta-pottie inside the helm console, and some moderate storage space, including a table top. Rod storage under the gunwales is a good use of the available space.
The helm featured a black fiberglass insert in an otherwise white helm, and that really set off the Faria analog gauges and stainless destroyer wheel with turning knob. The helm seat was over top of a 48 quart removable cooler, and had an adjustable backrest, but lacked a flip-up bolster. The footrest worked well while seated. A Fusion stereo and Garmin GPS Map 741XS completed the electronics. I’d like to see a VHF radio added if you truly planned to go offshore.
Overhead, the t-top was finished in white powder-coated beefy round tubing with a sunbrella top stretched over the frame. It was a great size to double as a grab bar while underway.
Aft, two flip-up seats were positioned out against the gunwales, that when folded down worked well as a rear casting platform, albeit somewhat narrow. At rest, the small swim platform sat well above the water, wrapped around the outboard nicely, and there was a small 3-step reboarding ladder.
It was windy as we left the dock unassist-ed and I was appreciative of the torque the 150hp Yamaha offered in the tight quarters. As we cleared the end of the docks, and I idled back, the sound of the outboard was inde-terminable with waves and wind overtaking even the tell-tale water jet.
I recorded a time to plane of just 3 sec-onds as the 19 degree deadrise hull literal-ly jumped in response to my throttle input. Dancing over the light chop, the 2,200 pound hull reached a top speed of 46mph and react-ed instantly to my steering input providing a fun ride! The 150 Yamaha offers more than enough power, even when you factor in up to 10 guests and perhaps a skier with the tran-som mounted tow post.
Overall, this family-friendly centre-console presents as a cute bottle-nose dolphin and performance-wise you’ll find it offers that same fun nimble playfulness sure to thrill!
By Brad Roberts