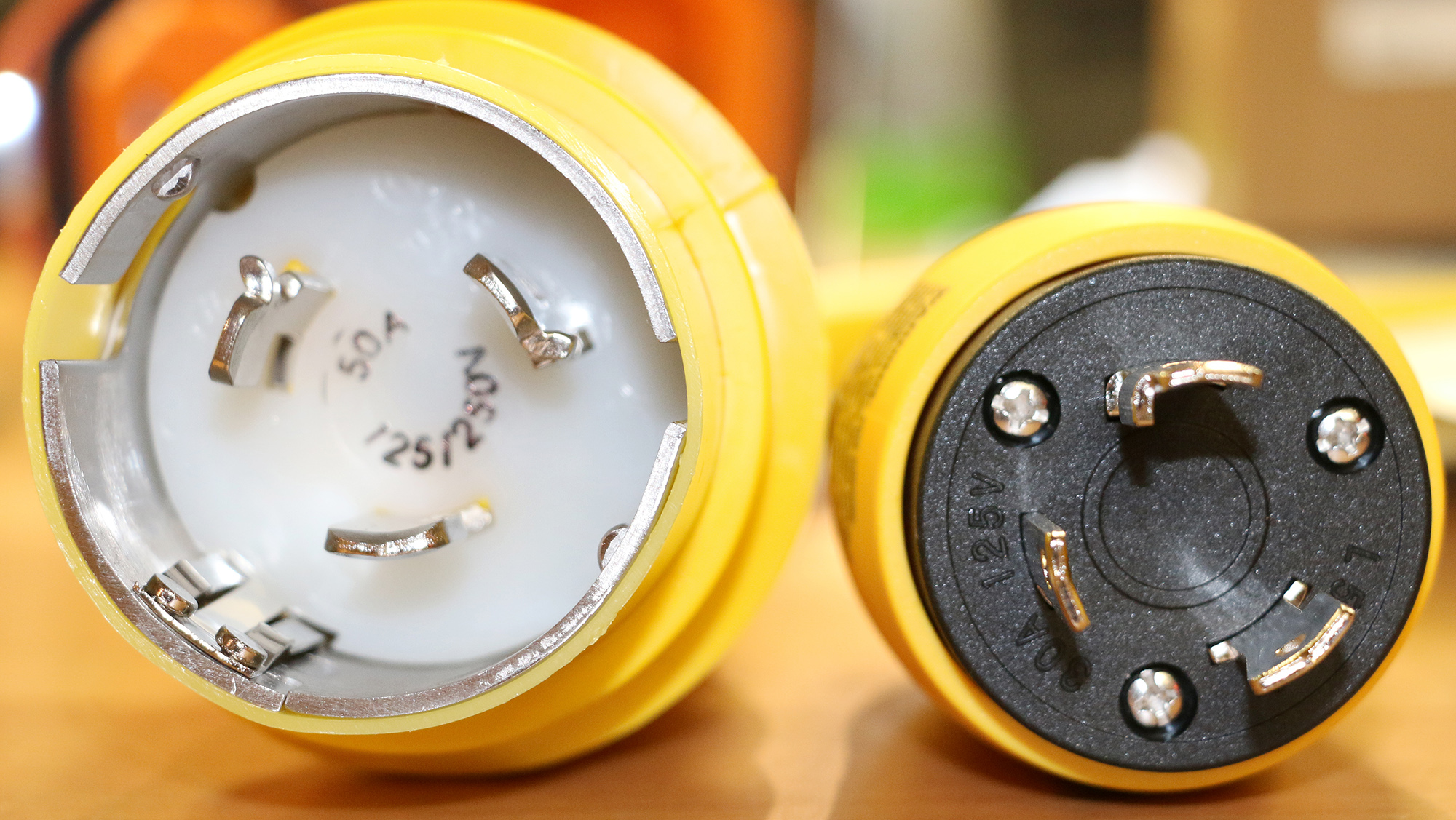 By Mark King
Strolling the docks of many marinas it is still common to see improper shore power connections. They can run the range of taped over repairs, household extension cord wires fitted to marine adapters, or marine adapters fitted to household circuits, and home-made splitters to change 50 amp power outlets to two, 30 amp outlets for one, or even two different boats.
Lurking behind some of these connections, especially on older used boats that have changed hands one or more times, may be a hidden danger; a danger that most boat owners may not notice until it is too late.
But first, some background.
Shore power for boats is a relatively new service. Originally, pleasure boats did not have the convenience of shore power. As late as the 1990’s and into the early 2000’s you could find marina docks lined with household extension cords running to boats from a common outlet on shore and even simple household connections on posts on the dock.
Generators and shore power installations have become more common and now, electrical systems on even the smallest cruisers can be quite complex and marina systems have kept pace.
Many marina installations use a three wire system for shore power, technically called a 2-pole, 3-wire system. It consists of a neutral conductor (wire) that is usually white, a live conductor (wire) that is usually black but can be another color, and a ground wire that is green. There are also four wire systems designed to prevent the problems outlined in this column but we are dealing with the three wire systems.
There are also three popular power load outlets. Most older and smaller boats require a 20 amp service. Newer and larger boats use a 30 amp service and even larger boats now often have a 50 amp service to run larger appliances and air conditioners.
If you look at a three wire shore power plug or receptacle you will notice that one of the three conductors is L-shaped.
On a 20 amp and 30 amp plug and connector, the L-shape is exactly the same and carries the green, ground wire. The radius of the plug and the receptacle is slightly different between the two, but at first glance, they look the same.
And here is where the problems start. With a worn plug or receptacle and a little bit of force on the part of the hurried or impatient boater, it is easy enough to shove a 20 amp plug into a 30 amp receptacle or a 30 amp plug into a 20 amp receptacle.
With most marinas now carrying 30 amp service, it generally isn’t much of a problem if a 20 amp plug is forced into a 30 amp circuit. The power used on board the boat is usually only in the 20 amp range anyway so the cord will not be carrying 30 amps to the boat – although it is available if there is a dangerous short.
It could also be available if an owner has added electrical devices that cause the boat to draw more than 20 amps, and in this case it will be asking the cord and the fuse or circuit breaker to carry more current than it was designed to carry.
And, we all know what happens when you continually blow a fuse or a breaker – the handy boater puts in a larger fuse or breaker or bypasses the breaker altogether.
If you are purchasing an older boat, you should inspect any electrical modifications, the size of the circuit, and the shore power cord.
And then, there is the real possible danger awaiting unwary boaters.
The L-shaped conductor on a three-wire, 50 amp circuit is actually the neutral, or white conductor. To avoid confusion on the dock, the L-shape is reversed on the 50-amp circuit so there is no danger of plugging a 20 or 30 amp plug into a 50 amp receptacle.
Again, the clever and handy boater with a 20 or 30 amp plug facing a 50 amp receptacle can reach into his tool box and trim the leg off the L-shape ground wire on his boat’s plug.
And again, plugged in correctly, this will mean that 50 amps are available to a boat designed to use 30 or 20 amps. Potentially there is no real harm here, although it is extremely unwise, as long as the load is kept within the designed limit.
But what happens if in the driving rain, or the dark of night, or a moment of inattention, the lower amp plug with the trimmed off leg is plugged in the wrong way so the ground is actually stuffed into one of the conductors on either the 50, 30, or 20 amp receptacle?
This is where the real danger lies.
The first thing noticed will be that the metal frame of every appliance on board the boat is immediately electrified which can lead to shocks or worse for anyone holding onto the appliance.
Worse still, if the boat has been properly built, the ground wire of the shore power circuit is also connected to the negative battery terminal in the boat, at, or near, the engine. This prevents shore power from reaching the water if there is some stray minor fault from the shore power circuit to the battery current on board the boat. The stray current can return along the ground wire to shore.
However, with the plug connected incorrectly to the receptacle, the ground circuit becomes live sending enough current into the water around the boat to kill swimmers or divers in the water and to eat through any steel or aluminum hulls nearby.
Unfortunately, incidents such as this have happened.
It is the responsibility of the boat owner to ensure that their shore power connection is proper and their electrical systems are working correctly. Especially if you are buying a used boat or retro-fitting your own boat, make sure the electrical system is properly sorted and the shore power cords are as manufactured.
In the next issue I will provide a checklist for the proper use and maintenance of shore power cords and devices.