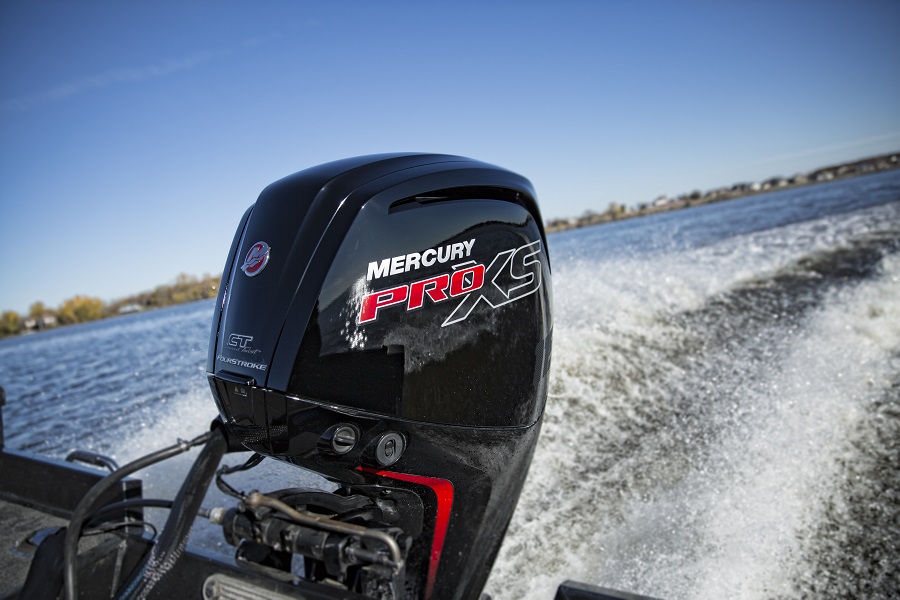 In our annual marine power feature, Power Boating Canada shines the spotlight on the entire line from every marine engine manufacturer. We look at what’s new for the coming season, what engines got retired, and what tried-and-true workhorses are still in the lineup.  The focus is on helping you pick the engine – electric, gas or diesel, outboard or inboard – that’s right for you and your power or repowering needs.
By PBC Staff
MERCURY MARINE
Mercury Marine has the largest marine power offering of any company, from outboards to sterndrives to diesel to inboards.  Let’s look at each line individually.
Outboards.  The Mercury outboard lineup includes both four-stroke and two-stroke/direct-injection models. The four-stroke Verado line consists of four six-cylinder engines from 225hp to 350hp (including the new Verado 350 introduced last year – the lightest 350 on the market by 95 pounds); and two four-cylinder models from 175hp to 200hp.  The three Pro Four Stroke models, 200hp 250 and 300hp, all run on the same fuel as the Verado 300 (91 octane is recommended, but using 87 octane won’t compromise warranty coverage).  Mercury’s outboard joystick technology – a combination of the Axius system and the independent hydraulic steering for each Verado engine – is an option on new models of Verado 250 to 350hp models.

HONDA MARINE
Honda offers outboards from 2.5 to 250hp.  They introduced their most powerful mid-range engine in the fall of 2015: the all new BF 100. The new engine is a 4-cylinder, 1,496cc (91.4 cubic inch) 4-stroke model weighing in at 366 pounds (166 kg).  Like all Honda Marine outboard engines, it’s based on the same design and technology that powers Honda automobiles such as the Accord, CR-V, Civic, Fit, Odyssey, and Pilot.  The new engine features a neodymium magnet flywheel that produces 44 total amps and 35 charging amps; Lean Burn Control that automatically adjusts the air/fuel mix according to speed and load while maximizing power throughout the acceleration range – providing best-in-class fuel economy in cruise mode (2,000 to 4,500 rpm); and Variable Valve Timing and Lift Electronic Control™ (VTEC™) first debuted in the Acura NSX sports car, VTEC™ technology offers a broad, flat torque curve and smooth power delivery throughout the outboard’s entire operating range.
Their flagship outboard – the BF250 was introduced in 2011.  The 250hp 3.6L 24-valve sixty-degree V6 outboard is based on the Honda Odyssey minivan engine and claims to have the best-in-class fuel economy.  That, along with a host of other innovations and advancements, went on to help the BF250 win an IBEX Innovation award that year.
Honda Marine manufacturers a total of eighteen four-stroke outboard models: from the lightest weight 2.3hp portable engine in the industry all the way up to the flagship 250hp outboard.  The entire line meets the rigorous California Air Resources Board (CARB) 3-Star standards. They also offer an industry-best True 5-year, non-declining limited factory warranty.
For more information visit www.marine.honda.ca
TOHATSU OUTBOARDS / NISSAN MARINE
Tohatsu America Corporation is the U.S. and Canadian distributor of Tohatsu Outboards. Nissan Marine has discontinued outboard sales, but all Nissan outboards are fully compatible with Tohatsu parts and accessories.  Tohatsu is Japan’s oldest outboard manufacturer, has been producing high quality, durable outboard motors since 1956.
Tohatsu offers nine portable models from 2.5 to 20hp with their 4hp, 5hp and 6hp featuring a front mounted shift handle – an industry first in this horsepower category.  The eight Tohatsu mid-range four-stroke models are highly efficient and go from 25 to 90hp.  There are five larger engines from the in-line 4 cylinder DOHC 16 valve 115hp  to a 3.5L narrow design V6 with 250hp.  The TLDI (Two stroke Low pressure Direct Injection) Series features seven models from 25hp to 115hp.
All Tohatsu outboard engines meet or exceed the U.S. EPA emission regulations and have earned the California Air Resource Board (CARB) 3-star Ultra-Low emission rating, and come with a 5-year limited warranty.
For more information visit www.tohatsu.com
APS
Advanced Power Sports has a lineup of nine portable four-stroke outboards ranging from 2.6hp to 25hp. All engines feature a 24 month limited warranty.
For more information visit www.tomoscanada.com
CUMMINS:
Cummins and MerCruiser transitioned away from their joint partnership and back to their parent companies in 2014.   Customers with 5 to 15 litre engines should contact Cummins directly for parts and service, while customers with engines up to 5 litres as well as drives and controls should contact Mercury Marine diesel division.
Cummins and Konrad Marine’s joint partnership has 480 and 550 horsepower diesel sterndrive package options.  The 480hp has both a leisure and commercial application approval. It offers 37% more horsepower and 129% more torque than gasoline outboards; and beats other commercial diesel sterndrives with 46% more horsepower and 54% more torque.
The 550hp is aimed at the leisure market and features 875 ft. lbs. of torque.  There are a wide variety of packages available utilizing one of six sterndrive models and 9 variations of the QSB 6.7L engine.
For more information visit www.cummins.com and www.konradmarine.com
TORQEEDO:
Now in their 11th year, Torqeedo are those little grey and orange unmistakable outboard motors.  The electric outboard initially drew a lot of questions and nay-sayers, but they have now proven themselves in both power and reliability.  There are 14 different models ranging from a very portable 1hp outboard to an 80hp commercial grade outboard!  The Deep Blue line includes a hybrid drive system as a 40, 80 and 160 hp equivalent.
Torqeedo introduced an all-new electric inboard in 2016.  Called Deep Blue i-1400 or i-1800, it’s the first high-power propulsion system in serial production. Available in 40hp or 80hp versions, the true inboard design works as a shaft drive or sail-drive.  The battery comes with a long-term battery capacity warranty: 9 years after commissioning, the batteries will still have 80 % of their original capacity, even if you use them every day.
The “Torq Trac” is a dashboard for electric motors that tells you on your smartphone how far you have left to go on the battery. A solar powered 45W battery charger keeps both the travel and ultralight models topped up with free solar power.  Torqeedo’s Power 26-104 lithium ion battery features unique intelligence that protects against short circuits, overloads, deep discharge and wrong polarity, while providing an incredible performance of 2,685 Wh for only 55 lbs of battery weight. For lakes which ban or restrict the use of other engines, Torqeedo opens up a whole new world of powerboating with performance without breaking the rules or costing a small fortune.
For more information visit www.torqeedo.com
LEHR:
We first wrote about the then new Lehr propane outboard back in 2011. At that time, only a 2.5 and 5hp model were available.  In 2014, the company added a 9.9hp version.
A propane engine does not pollute the water, has no ethanol or fuel-related issues, produces zero evaporative emissions, starts easily with no priming or choke required, and requires no winterizing.  Propane has a 110 octane rating compared to 87 to 93 octane ratings for gasoline, which simply means more power per stroke.
In 2015, Lehr announced their all new 25HP (30.4 cu in / 498 cc) outboard motor with an internal battery that offers easy electric start with no rigging or battery clutter in your boat.  The new 25hp outboard weighs just 172 lbs (20” shaft) to 194 lbs (25” shaft) and comes with a full 3-year warranty.
For more information visit www.golehr.com