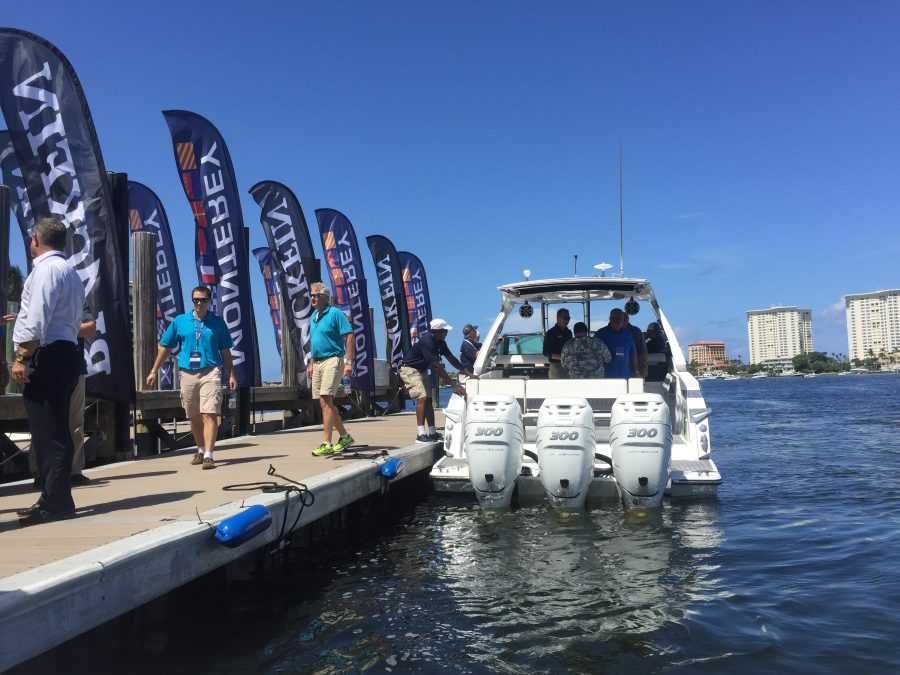 By Zenon Bilas
Boat dealers and media organizations from Canada, USA and from around the globe traveled to the luxurious Boca Raton Resort and Club on Florida’s southeast coast to see what was new for Monterey Boats in 2018. Power Boating Canada was on hand to see all the debuts and to hear the news.
And the news is really big as Monterey is expanding to include a sister company, Blackfin, a company focused on hardcore fish boats. With a bang, the Blackfin line debuts with 3 center console fish boats for 2018:  a 212, 242 and 272 model. A fourth model, a 33 foot center console, is in the works and should make a debut at the 2018 Miami International Boat Show. And there are more Blackfin fish boats to follow. These center console fish boats will be available with either Mercury or Yamaha outboard power. Blackfin boats are built in a separate plant next to the Monterey plant in Williston, Florida.
On the Monterey side, there were several new boats unveiled. On the smaller entry level side, the stern drive powered M 19 and the outboard powered 205 are both making a debut for 2018. Both models feature the same hull. The M 19 features a 19’8” length and the 205 features a 20’ length. Both boats have an 8’4” beam.
The theme of giving boaters the option of stern drive or outboard power is evident throughout the Monterey line. On the opposite end of the spectrum of size, Monterey unveiled the luxurious 385, an open bow day cruiser featuring triple outboard power. The 385 features the same hull as the 37’ long stern drive powered 378 SE, which made its debut last year.
A benefit of outboard power in the 385 is more onboard space and that extra space allows Monterey for the first time to include a gyro stabilizer as optional feature in its boats. The Seakeeper 3 gyro stabilizer featured in the 385 is revolutionary as it is the first gyro stabilizer to use a 12 volt battery, instead of relying on generator for power.
During the demonstration of the Seakeeper 3 on the Atlantic Ocean, we were thoroughly impressed with how well the gyro stabilizer kept the Monterey 385 level when either the starboard or port side of the boat was hit with waves. Don’t be surprised to see the optional feature in future Monterey and Blackfin boats as Seakeeper plans to unveil gyro stabilizers for even smaller boats.
Keep an eye for full tests reports on the new Monterey and Blackfin models in the upcoming issues of Power Boating Canada magazine.