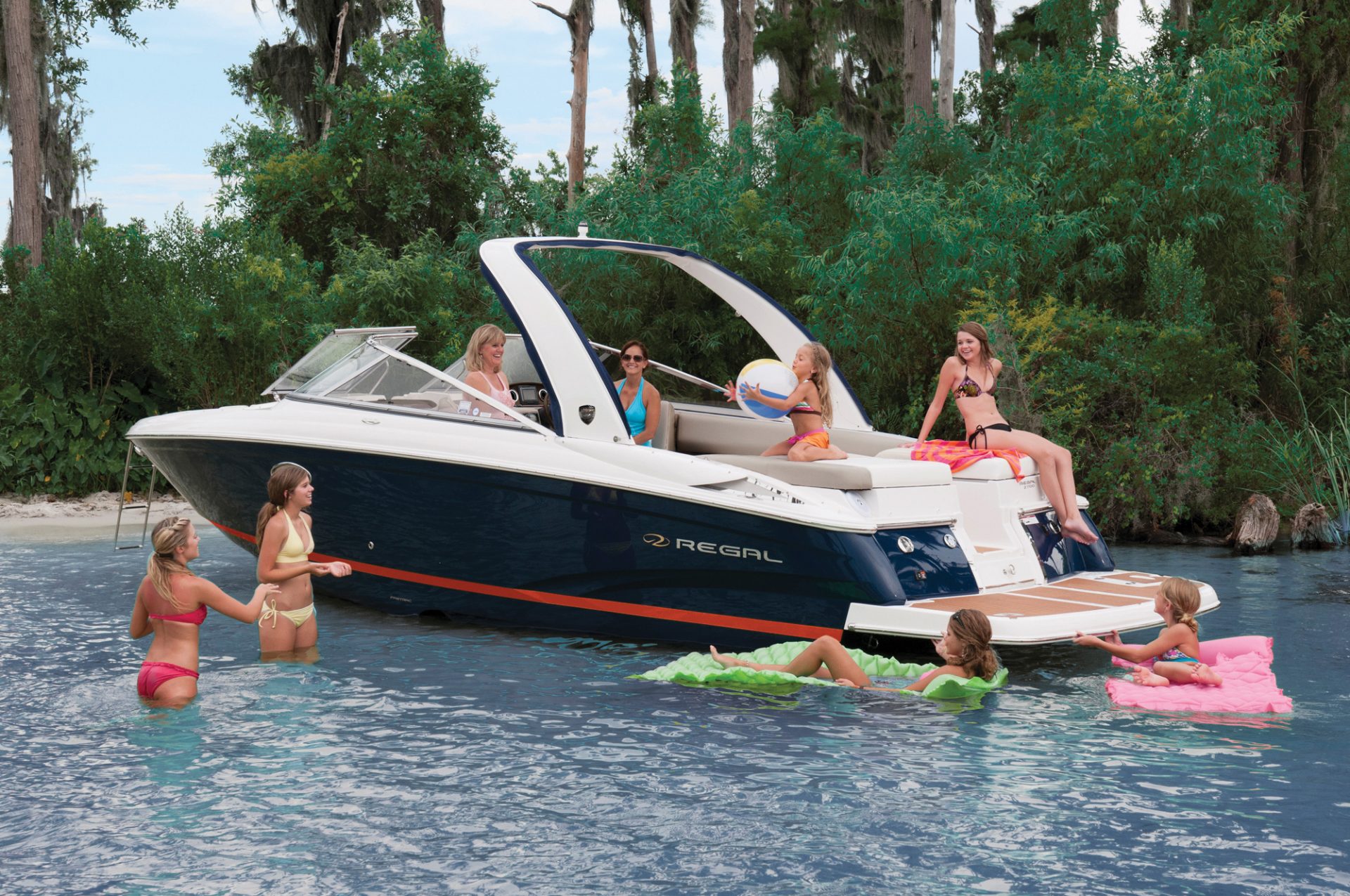 When the military storms a waterfront during war or training, the vessels they use take the punishment of being rammed up on shore. They are durable enough to hit rocks or other damaging obstructions that lay below the water’s surface.

Recreational boaters often run up on shore sometimes on purpose (sometimes not) and there are things you should know in either event. After all, your fibreglass runabout is a little more vulnerable to shallow water damage than military vessels.

Let start with beaching. Many sport boats have features designed for this popular pastime. Ladders Fold away under the bow deck to offer easier beach access, while many deck boats incorporate a bow entry or step pads to provide even more convenience. Remember, though, sand can be abrasive and the sand you’re landing on can take the finish right off your hull and allow water to seep in. If you go up on the beach often, it’s a good idea to let the hull dry out over the winter, then refinish the fore section before launching it again in the spring.

You should also be aware of other wakes or a change in the wind when you you’re pulling up on shore. A friend of mine once took his jet boat out of Gloucester Pool for an island picnic in Georgian Bay. He tied up on shore thinking the water was deep enough so his boat wouldn’t hit bottom. Unfortunately, he didn’t account for the wake from passing boaters. Every time a wave came along, it picked up his boat and dropped it on a boulder that was protruding from bottom. Eventually it drove the engine right through the hull for an expensive repair.

However, when boats go up on shore unintentionally, or you hear the crack of a prop hitting something, it can easily ruin your day – or worse. Whenever you head into shallow water you have to take care. Slow down and keep a close watch ahead. Unless the water is all muddied up from spring run off or a heavy rain, you should be able to see shallow water in time to keep from bottoming out or hitting something. You can determine bottom structure and depth by the changes of the water colour. Darker patches could be mud, weeds, or rocks while lighter patches are probably sand. If your depth sounder shows the bottom sloping up, slow down and steer around the patches – very carefully.

Another situation that has caught many boaters by surprise is misreading the markers at a shoal. For instance, between Atherley Narrows and Orillia in Ontario there’s real a bottom-eater. It’s identified with a buoy at either end, but if you look too quickly or misread them, you might think the channel goes between the markers rather than around.

New shoals can appear that aren’t marked until someone hits them. One time, after a gully-washer downpour in Orillia, the storm drains brought so much sand down to the harbour that a sandbar appeared near the entrance. While you would expect certain areas to be clear, don’t take it for granted. There’s a marina I know of that has a wide open gas dock. You would expect deep water right up to the dock, but for a long time there was a large rock not far from the mooring that preyed on props – mine included. For the longest time, until they moved it, the rock wasn’t marked.

In systems such as the Trent-Severn, water levels drop in late summer to make room for spring runoff. As the levels go down, a shoal you cruised over all season may suddenly not have enough water over it. Boaters in the Lake Huron-Georgian Bay area have noticed new islands and shoals due to lower water levels over the last few years. You’ve got to keep an eye out for such hazards, but sometimes you don’t know what hit you – or what you hit – until it’s too late.

Once I was heading downstream from the Kirkfield lift lock. I’d been there many times before and in this particular situation. I was right in the centre of the marked channel and hit something. To this day I still don’t know what it was. I suspect a log. In certain areas where canal builders have flooded the forests, logs have sunk to the bottom after absorbing water. During the process of deterioration the buoyancy of the wood changes – not enough so the log can float to the surface, but enough so turbulence from a passing vessel can lift one close enough to the surface and hit your hull or prop. In areas that have been flooded, remember not to follow a larger vessel too close just in case.

In spite of all your efforts to the contrary, and you do ground our or hit something, immediately put your gearshifts in neutral and pull throttles back to idle. Don’t try to spot the boat by throwing it reverse. If your prop hits something at a high rpm, the damage can multiplied exponentially. Some vessels have a very pronounced and thick keel, allowing the boat to easily ride up on and do little damage. But with models that don’t have a keel forward, such as performance boats, the aft section (and quite possibly your drive and props) will grind along the bottom.

If your boat comes to a sudden and noisy halt, check for cracks in the hull and water coming in through the transom. If there is stay put and call for help.

Next try to determine how stuck you are. Look below the stern to see how much water there is at prop(s). If you landed lightly with just the forward portion of vessel grounded, and the water is clear astern, move your passengers to the stern to help the bow section float – then just put the boat in reverse and back off the obstruction. If you’re successful, head straight  for shore. As you do, watch the bilges to make sure there’s no water coming in. Also keep your eye on the temperature gauges. If you engine(s) start heating up, chances are you have weeds in your strainer. Weeds can easily be cleared by putting the shifters in neutral then reverse, with a little throttle, then back to neutral. Repeat if needed, until the weeds float away.

If you can’t back off under your own steam a Good Samaritan offers a tow, be very careful of how you secure the line. I once watched a situation such this on Lake Ontario. The towboat affixed a single line to the other vessel’s rear cleat. When he started to pull, he hauled the stuck vessel’s cleat right out and it catapulted through the air. Fortunately it didn’t hit anyone but the damage to the deck where the cleat used to be was significant. A bridle can be rigged up to tie the towline to two, four, even six cleats to spread out the force.

Sometimes your best bet is to leave the boat hung up and let the experts extract it. Many years ago I saw a boat on the rocks and tried to help. My boat couldn’t budge it so we got a tug to put its muscle to the job. While that worked, unfortunately, when it pulled the boat off the rocks, the bottom ripped a hole in the hull and the boat sank as soon as it got into deeper water. Many others have run out of fuel and have fallen prey to the wind, but in all likelihood and anchor would have saved a lot of problems. If your engines stop and the wind is taking you where you don’t want to go, throw out an anchor and make sure it’s holding before you go below and start messing with the engines. It could save your hull.