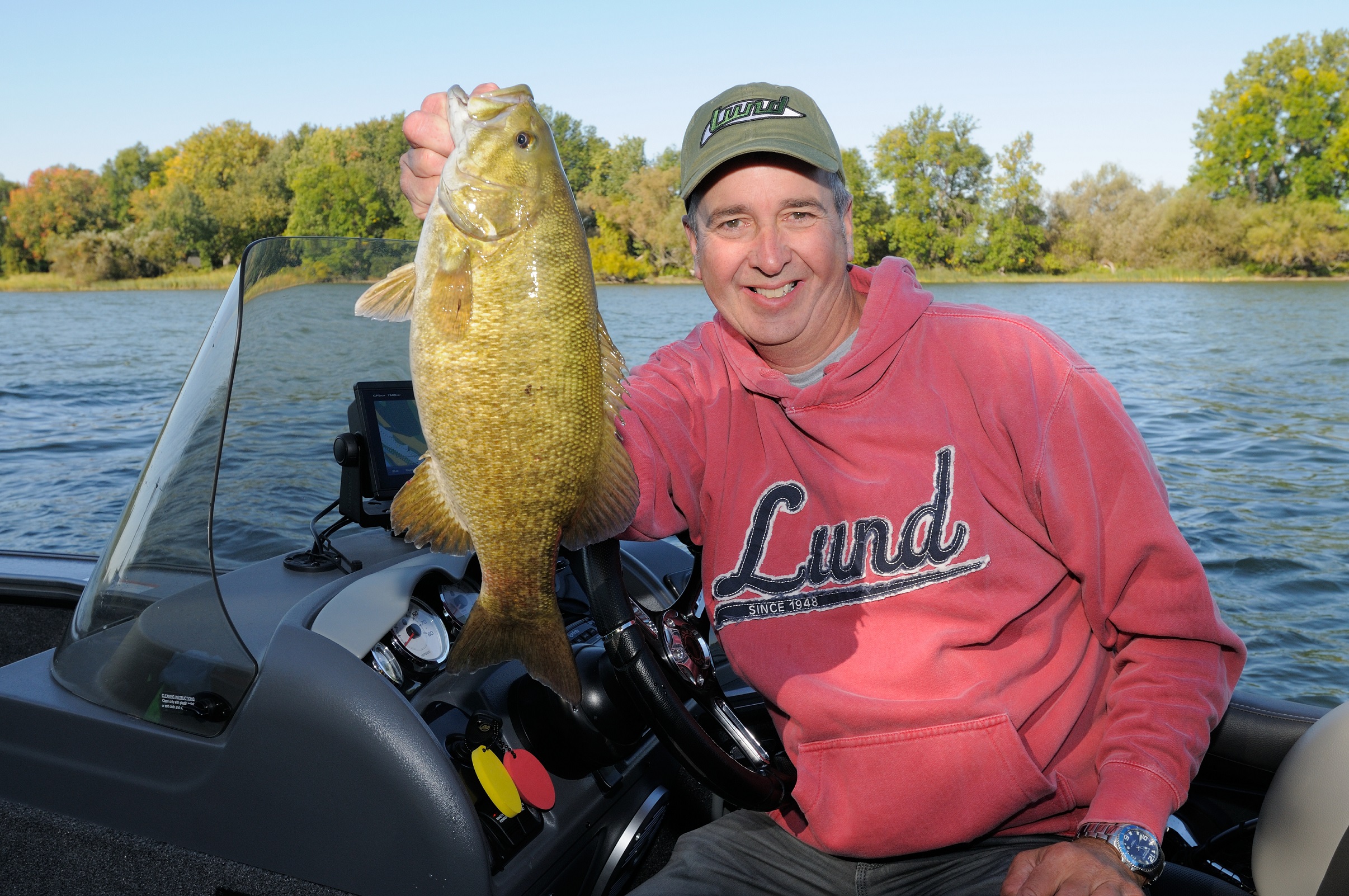 The following article is by Patrick Campeau. It will appear in our upcoming Power Boating Canada Volume 35 Number 3. Want to subscribe for future issues? Click here!

Fall is a time of significant transition in nature, and fish are but one example. These creatures see major life milestones during autumn: some species of salmonids, for example, highlight their fall with the breeding system. Several fish species’ metabolisms, meanwhile, begin slowing as underwater ecosystems start to cool; these changes vary in direct relation to temperature and the particular species’ endurance to cold. To be sure, all fish must adjust to new and severe conditions during this time of change.

After all, their complete universe is in a state of transition. Their habitat is slowly decomposing as aquatic plants – until now having offered fish places to hide while hunting prey, as well as camouflage and hiding places from larger predators such as northern pike and muskellunge – are disappearing. New habitats must now be found for the cold weather seasons.

Autumn mixing of water also inevitably occurs. Warmer surface waters, with the help of windy autumn nights, will begin mixing with the deeper cold waters. Water temperatures will now be more homogenous, much to the misfortune of many species who still require time to acclimate to a harsher winter environment and its new realities.

The fall winds will also generate an increased amount of murky water. Along with shorter days, the obvious effect of this murky fall water is an additional decrease in the amount of sunlight which penetrates an underwater environment. Fish species, such as walleye, avoid direct daylight; this new natural filter darkens the waters to their delight.

The Effects of Autumn on Fish

Although not scientifically proven, many stakeholders in the area of fish habitat hold to the belief that walleye and smallmouth bass feed more in autumn. The fish, then, work to increase body fat in preparation for a difficult season. As winter weather brings a slower metabolism, abundant feeding becomes increasingly difficult during this period. Food becomes less accessible and more difficult to locate. Efforts, therefore, must be put into gorging at this point. In such a case, the La Fontaine fable about the ant and the grasshopper seems very appropriate: it appears clear to me that if a fish does not put on abundant fat during the early fall, it may find winter survival rather difficult.

As we’ll see below, habitats which meet the needs of various schools of walleye and bass following the fall migration are less numerous than what was available during summer. The number of individual fish in the school per cubic metre usually significantly increases, creating natural competition between different individuals within the group.

They must stuff themselves to fatten up while facing increased competition for food. The result of this event is simple: fish become more aggressive, more adventurous, less suspicious, less alert, and, ultimately, easier to crack.

Try placing yourself for just a few moments in the skin of a walleye. They usually live in schools, and this group is almost always made up of fish the same size as you. Together, they can sustain much greater firepower while most team members get their share. During fall, several other schools are grafted to yours (or vice versa) to dramatically increase the number of colony individuals. Thus, this new squad of warriors can attack bands of small fish with even greater brutality. Yet there is a large problem here: there are more mouths to feed, especially when you consider that appetite has increased tenfold. You have no choice, then, but to become a more effective attacking machine that is simultaneously more vulnerable.

During the summer season, we find our two species positioned well close to natural structures, strategic habitats, or simply suspended in the middle of nowhere. Depending on the type of water in which you fish, you should redirect your shots to new locations in the fall. Some walleye and bass will occasionally stick to “summer spots” but, sooner or later, will reposition themselves to autumn and winter sites. The conditions surrounding the ecosystem will generate this migration to those fall and winter sites.

Lake environment changes of bass and walleye are relatively easy to follow. The walleye will generally concentrate near ridges in the vicinity of the lake’s deepest parts. They may also opt for the lowlands near various structures. Bass, meanwhile, usually leave the banks to approach the pits. Bass will opt for locations adjacent to surface structures and cliffs. Both species will attend tributaries in their respective proximities.

In rivers, the current and water flow will be determining factors in where the fish position themselves for less clement weather. They will enjoy the food that is naturally transported into their habitat.

The metabolism of walleye enables this species to deal more effectively with rigorous cold. They appear headed for a deep lethargy in late fall but rebound after the autumn turnover and its uniformed cooling of the water. The walleye gradually resumes hunting in a moderate and less sustained way than summer or early fall. The smallmouth bass, on the other hand, goes into a deep winter lethargy and does not reactivate until spring. Essentially, it hibernates – the fish’s functions slow, and it does not emerge from this torpor unless forced to do so.

In summation, walleye and bass try to increase their fat for the winter. They do not want to spend much energy keeping up in the current.

Habitats may differ depending on the water. The walleye may opt to winter at the foot of a dam, at the bottom of a pit, near a major tributary, and so on. It’s a mistake to believe that every similar habitat will house fine specimens – there are often subtle nuances from one location to another that may or may not appeal to fish. We can look at ten similar locations but find that only two or three are truly productive. The reasons can be as mundane as the current’s steering angle, the surrounding depth, or proximity to larger predators. While it’s probably impossible to discover the cause of our failure, it remains important to visit other inspirational locations. Think like this: the “spot” you have chosen in which to fish may be perfect for you and may have plenty of walleye but, if the migration has not taken your route, this location may still come up short. There are several factors to consider when looking for a spot that will yield fish; these factors must have perfect chemistry. A clever mixture, if properly discovered, will appeal to fish and reward you.

The fall walleye habitat will be on that part of the structure which receives the brunt of the current. The drop off the point of an island is one example, especially if it is lined with cliffs adjacent to deep water. In this case, the walleye must only travel a short distance to attack a school of hungry forage fish migrating from the abyss to the island’s front structure. During warmer days, the walleye can stay on this structure for several hours. If conditions worsen, they are not far from the depths.

Manmade channels can also contain several specimens. These channels often wind in shallow waters. Currents and winds can bring an incredible amount of food desired by several species of forage fish which in turn are desired by walleye. They simply must stand guard and wait for breakfast.

A steep escarpment near shallow water forms an equally productive location. This site resembles a wall with direct access to widespread shallows. Various aquatic plants remain for a certain period and form both an ideal primary and secondary habitat. Herbal walls are often located along these cliffs, providing an incredible transition zone. Wind and current moving through these deeper channels push strip bait fish to the shallows, thus preparing a feast for the walleye. They will stay in the deeper grass line or grassy plateau and prepare to feed in the shallows. The walleye will borrow any other access routes to this foreshore and will amplify your fishing results.

As with walleye, you will have to explore several locations before finding sites that offer production during this time of year. The bass are more sensitive to Mother Nature’s abuses in cold seasons. If fishing results are poor and bad weather continues, fishermen and women may find themselves wasting time regardless of the offerings in shallow waters.

Fish will move into the depths. When sunlight floods the waters for a few days, however, part of the population will return to shallow, warmer waters. Bass frequently migrate to deepwater areas adjacent to shallower structures after the autumn turnover.

You’ll find areas behind islands and without much current hyper-prolific habitats at this time of year: there will be a significant lull in current on the side unexposed to the flow. If there is an escarpment that does not suffer from the stream’s wrath, you will have found a perfect place for bass to spend much of the fall and winter. Proximity to migrating strips of forage fish is part of the complexity that governs good autumn locations. Grouping all these components, and knowing that bass will not fight the current, they may still feed without much effort if the current leads food to a habitat.

Those island faces exposed to current can also provide valuable habitats, especially with an escarpment against one side or the other of the point. The current passes over low-lying fish near the structure when these elements exist. The water will roll in over their heads, and the fish will enjoy the same benefits of lying in-wait for prey.

Rocks off mudflats are amazing places. With the necessary deepwater ingredients such as current and forage fish, you will have a fantastic fishing spot. This type of location offers the same benefits as those provided by the front and back of islands exposed to current.

If the sun has shone for several days, go for a spinnerbait with two large willow leaf spoons. Run them close to structures located in shallow water and get ready to capture the action for big smallmouth bass. If bad weather is the game, you must opt for more subtle techniques. Tube jigs or a drop shot rig will be formidable decoys to foil these smallmouths. Cast these lures into shallow water and dance along the escarpments.

The walleye is tempted by fishing with jigs all year. This technique works in the cold season as well. You could also try a swimming lure like the Puppet Minnow.

The Moral of This Story

Whether you choose to pursue walleye or smallmouth bass during the cold season, be certain to dress appropriately – you will endure the harsher climate much longer. The frigid water is unforgiving, so think before you venture. Look for the types of places listed in this article. If you unearth a few spots, you shouldn’t have any problem capturing some breathtaking shots. The largest trophies of the year are very often caught during this season. Take the opportunity to snap some beautiful pictures and send them to us. Who knows? Maybe you will be in the next edition with smiling faces and an impressive fish.

Patrick Campeau is a  professional fisherman that is a three-time provincial champion member inducted into the Canadian Pantheon of Fishing. Find out more about Patrick Campeau at
www.pcampeau.com or www.facebook.com/lapassiondepatrickcampeau