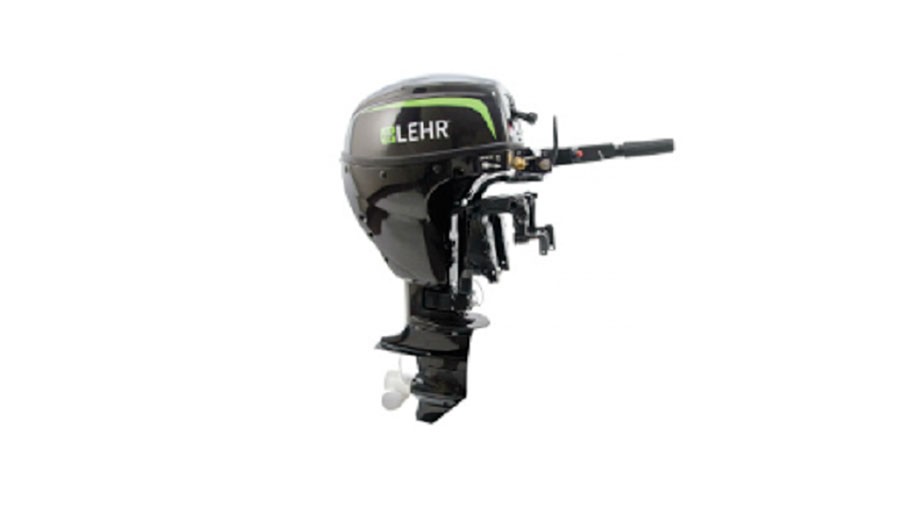 By: Cam Mcrae
From Issue 27-6
The search for alternate/cleaner fuels has become an obsession for any industry relying on the internal combustion engine. Although automobiles have benefitted from research into every conceivable possibility, only some of that work has translated into practical applicability for boats. We now have successful electric boats and the hybrid concept may work for sail boats (wind charging). Diesel has found its place, primarily in Europe. But, any real progress has been limited to cleaner, more efficient gasoline engines.
Then, at last year’s Miami Boat Show, an outfit called LEHR introduced propane outboards!  The 2.5 and 5 horsepower motors are the brainchild of eco-activist Capt. Bernardo Herzer, who discovered the benefits of propane power while piloting a research vessel in the frigid North Sea. Small engines on board were converted to propane in an attempt to improve dependability. Herzer, impressed by the results, subsequently created LEHR and began by marketing a propane lawnmower and a string trimmer.
The 2.5 and 5 will find homes on canoes, sailboats, dinghies and tenders. But, for me and for legions of other boaters, marine power starts at nine point nine. With that in mind I phoned LEHR’s office in LA. After some deliberation, the company spokesman confirmed that a LEHR propane 9.9 will be released no later than February’s Miami Show. You read it here in PBC first!
Why propane? The simple answer might be that there is lots of it. A simple hydrocarbon, C3H8, propane is a byproduct of most natural gas and petroleum refining processes. But, it’s also an excellent engine fuel. Stored as a liquid at under 200 psi, propane becomes a gas when released. Since no vapourization is required, no carburetor is required. A simple metering system introduces the gas to the engine’s intake. Perfect mixture, no choke, instant one-pull start every time. It’s naturally high octane – over 100 – so it will tolerate higher compression ratios and readily produce power. The gas burns cleanly and efficiently, releasing little in the way of toxic fumes and minimal greenhouse gasses. In North America alone, over half a million lift trucks and tow motors burn propane inside the confines of industrial buildings where gasoline engines simply could not be used. (The stink, by the way, is ethanethiol, added to the odourless gas to ensure that its presence is unmistakable.)
Could propane be utilized for a stern drive’s V8? Why not? Thousands of taxis and private autos have been converted to propane. And, consider that V8 engine’s efficiency and emissions when the fuel metering is under control of a sophisticated ECM.
Historically, propane has been rejected as a boat fuel because it’s denser than air, thus tending to seep down into the bilge, creating the risk of explosion. Capt. Bernardo insists that modern plumbing, the closed nature of a propane fuel system and fail-safe valving eliminate the problem. I would add that fume detectors would be advisable, possibly with an ignition interlock.
Fuel storage has also been targeted as a drawback for propane. It’s easy to envision a sleek bowrider carrying a bunch of barbecue canisters. But with propane’s relatively low storage pressure, marine tanks could be created out of aluminum or light gauge stainless steel. They’d be subject to some form of government approval process, but it’s all do-able.
Ironically, I had never put much thought to propane for boats until this past fall when Diana and I visited Volvo Penta’s Test Center. During a discussion of the abuses suffered by marine engines, the director, Capt. Bob Crocker, pointed out the huge fork lift the Center uses to pop the test boats in and out. Operating in the same challenging environment as the boats, an earlier version with a gas engine gave them nothing but maintenance and reliability problems. A switch to propane power and the problems went away. Crocker, the veteran boating expert, thought that propane would be an ideal boat fuel. That’s my story behind this story.