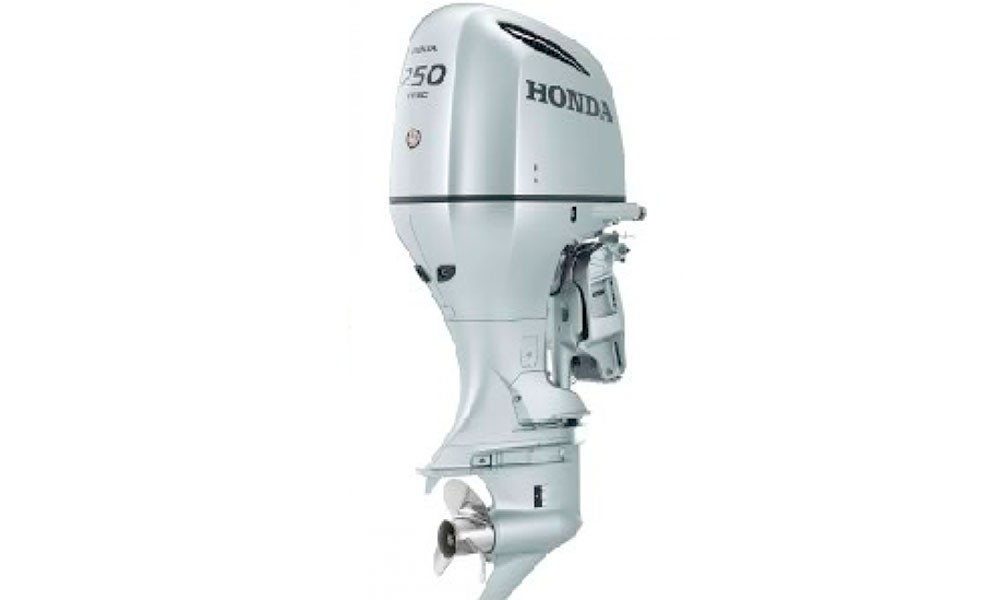 For almost seven decades the Honda Motor Company has built its success on innovation. Motorcycles, cars and small “power product” engines have all benefited from Honda-created advances. The world of boats gained the four-stroke outboard through Honda’s initial efforts and continued perseverance. Remember the comments? Too heavy, too slow, too much maintenance. Seems laughable now – thanks to Honda.
That said, Honda is, by and large, a conservative organization. They dance to their own tune, and won’t be pushed or lured into following the latest trend. So it was with the advent of the megamotor outboard. While the other OEMs were eagerly creating 300 hp monsters, Honda’s offerings maxed at 225, with little indication that that might change. For a while, you could see the logic. The big engines seemed geared to a narrow market, populated by the flashy, high speed, gold chains and blonds-on-board set. That quickly changed as the 250-300 hp engines found homes on a wide variety of vessels designed specifically for their use, often as alternative to I/O power.
In response, Honda has released the BF250, a 3.6 litre (3583cc) version of the 3471cc   BF225 60 degree 24 valveV6. That might seem like a simple exercise – punch out the displacement, modify the induction slightly and bingo! 25 more horses.  Honda, however, has subjected the flagship BF250 to a complete engineering review, adding features and modifications that will serve the engine in its heavy-duty role. And, I would suggest, that will support the engine if Honda decides to add even more horsepower.
The two stand-out features are a novel cowl and a brawny new gearcase. Designed to cope with all that power and transmit it to the water, the gearcase is an example of today’s computer-assisted detail engineering. The low-ratio (2.00:1) gears, 10 percent larger than the 225’s and with thicker gear tips, are forged from a new hyper-pure alloy and finished with an improved grinding process. Instead of the typical tapered roller, the forward gear now turns on needle bearings which maintain gear alignment under high thrust. The new case, large enough and strong enough to contain all that thrust, actually produces less drag than the 225’s, also the result of computer analysis. To eliminate the human factor, Honda has created Shift Load Reduction – the ECU changes the ignition timing to reduce torque, right at the moment of shifting. Small changes, but enough to handle 250hp – and more.
Historically, outboard cowlings were a styling exercise and a way to keep the rain out.
In recent times, the engineers have also employed the cover as an intake sound attenuator and to direct air to the induction system. Honda takes that concept a leap further by splitting the inlet routing of air into two “circuits”. The first ducts air from the front and routes it to chill electronic components. A top-mounted fan pulls this air past the alternator. A second circuit collects air from high-mounted vents, subjects it to a water-separation process and then conducts this cooler, drier air to the throttle body. Induction noise is quieted within the intake passages where a sound-interference chamber cancels out the racket.
Whenever I analyze a Honda outboard engine, I’m reminded of the story behind the Honda story. Whereas many of the technical features of the competitors’ powerheads are inspired by, or borrowed from, car engines, Honda starts with a car engine. In the case of the BF225/250 it’s from the Odyssey minivan. Early Honda outboards paid a small price in weight and ease of service as a result of this practice, a liability long-since remedied. (A 25 inch BF250 weighs 284 kg/624lb) But all Hondas exhibit the smooth flow of power and wide output band characteristic of the best automotive engines. A car tester would call it “excellent driveability”.
VTEC, Honda’s variable cam lift and timing device lies at the heart of both minivan and outboard performance. The outboard also incorporates “BLAST”, a hole-shot system which advances the ignition and richens the mixture when the throttle is mashed. The rest of the time, the engine is constantly tuned by “Lean Burn Control”, keeping the mixture and ignition timing optimized for both power and efficiency. (Honda claims best-in-class fuel economy.)
Returning to the BF250’s marine-specific features, the outboard carries a 90 amp alternator with “Amp+” which varies idle performance based on electrical load. In neutral, the idle speed is increased 100 rpm to handle a large electrical draw. The system disengages when a gear is selected. To ease the task of re-powering, Honda has retained the “old standard” 26 inch mounting centres. And, to ease the task of rigging, the BF250 is NMEA2000 compliant.
The National Marine Electronics Association software is a “standardized inter-connect protocol employed to create a plug-and-play cooperative network of NMEA compliant electronic devices on a boat”. (phew!)  In other words, your fishfinder can easily converse with your engine, your GPS and your autopilot.
There’s a story behind that story. For another time…