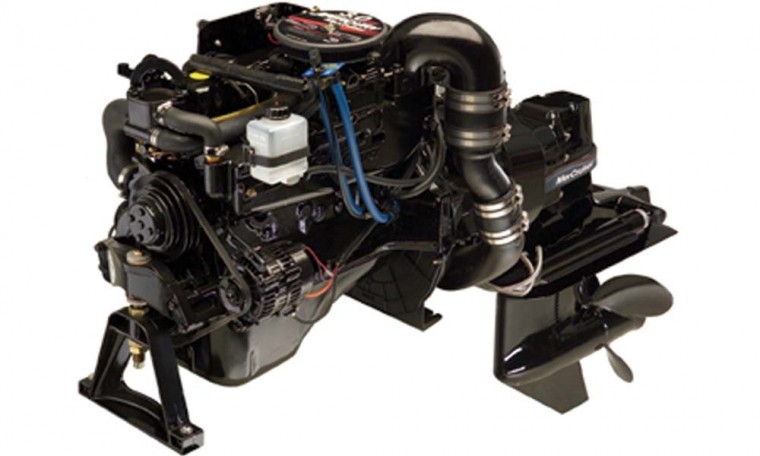 “The reports of my death are greatly exaggerated.” (Mark Twain)

There are times when the marine industry’s rumour mill makes me giggle. How can we get it so wrong? It’s a very human trait. Although our endeavours are based on pleasure, recreation and fun, we’re still fascinated by hints of doom and gloom.
Editor Brad recently asked me to comment on the death of the 3.0 inline four that has powered so many small outdrive runabouts. He believed it. I readily agreed to write the column. I believed it.
But then I called MerCruiser’s Director of Engines and Drives to get the background story. I could feel Facundo Onni grinning through the phone – both with humour and with exasperation. Apparently, Brad and I were not the only ones. Even boat manufacturers had called him in dismay! They believed it.
The truth is that the General Motor’s Vortec 3.0L four cylinder will be available into the foreseeable future. MerCruiser will continue to offer it in both TKS (Turn Key Start) carbureted and multi point fuel injected (MPI) versions. Although it’s the oldest engine in GM Powertrain’s marinized line-up, it has received continuous upgrading over the years. Including, thanks to some work by Sea Ray, improvements to the motor mounts that have partially reduced chronic problems with vibration.
So, how could a large group of industry insiders get it so wrong? Probably because there’s always some truth in every rumour. Here are the facts: The engine will not be offered in California. The 3.0 won’t receive a catalytic convertor option, now required in the Golden State.
Perhaps more significantly, it has been dropped from the Volvo Penta line. But we knew that was coming. When I interviewed Volvo North America President Clint Moore last year regarding Volvo strategies in a threatened market, he expressed concern about the number of combinations and variations they offered – eighty-one in total! It was Moore’s plan to reduce that to forty-one by July 2009 and even fewer going forward. Elimination of the 3.0 was part of that process.
Facts notwithstanding, there’s another, more subtle, factor at work here. Perhaps we readily accepted the demise of the 3.0 because it is nearing time to bid adieu. It’s a good little engine, but it is old tech. It’s heavy. At 135 hp it doesn’t make a lot of power, at least in comparison to the new outboards that might take its place. And it does vibrate.
Nevertheless, a stern drive comes with some inboard cachet and panache that will never be matched by a brash, upstart outboard motor. I once asked Cobalt President Sean Callan if they’d considered employing one of the high horsepower outboards. The designer of North America’s premium runabouts replied: “It’s intriguing. We’ve sure thought about it. But a Cobalt with an outboard just wouldn’t be a Cobalt.”
If the 3.0 is eventually superseded, I predict it will be by another small inboard. The 3.0 is relatively inexpensive, so if cost is the driving factor, GM Powertrain will likely marinize an engine from one of GM’s new compact cars. That would make a dandy MerCruiser. Today’s automotive engines feature dramatic improvements over past offerings. Remember that Honda simply tipped a Civic motor on its end to create their first four-stroke outboard.
But, if the goal is simply to create a darn good small stern drive, diesel power is a viable alternative. As a result of fuel costs and concern for emissions, Europe’s sport boats employ diesels already. Interestingly, MerCruiser’s own oil-burner division, Cummins MerCruiser Diesel (CMD), currently offers a 1.7 litre four that puts out 120 hp, spins up to 4,400 rpm and weighs less than the 3.0. (Give it a little more displacement, a little Mercury hot rodding, …) Even more interestingly, CMD just inked an engine deal with Volkswagen! We don’t know what the future will derive from that alliance.
So stay tuned, there’s still a lot more story behind this story. But don’t believe the rumours.