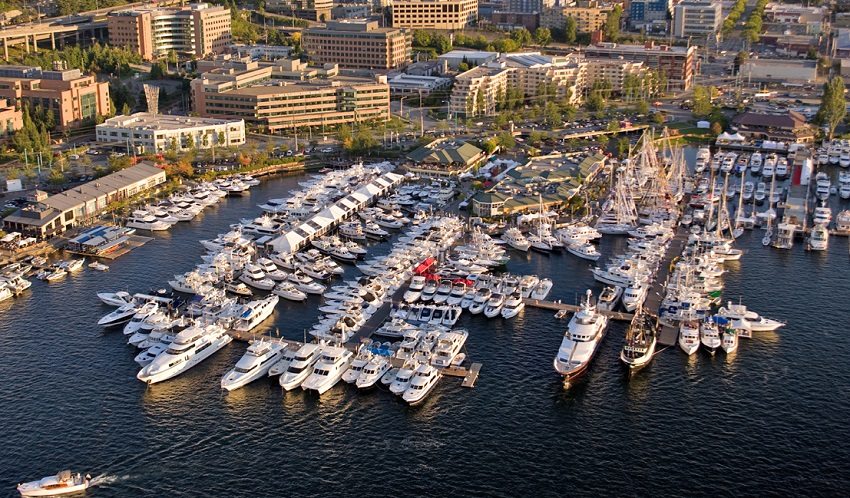 The 39th annual Seattle Boats Afloat Show, the West Coast’s largest floating show, gets underway on South Lake Union at 11 am on Thursday, Sept. 14 and continues through 6 pm on Sunday Sept. 17, 2017. For the newbie looking to get into boating, or the boater just back from a summer of cruising and lusting after a bigger boat, Boats Afloat is the place to kick some anchors. With more than 200 new and used boats on display there are plenty to kick. This year’s show features not only a wide selection of exceptional brokerage boats and 2018 new models, but also several brands new to the market and one returning to the market after an absence of many years.

On display from Alexander Marine USA will be the 85’ Ocean Alexander 2014, the largest 85’ motor yacht by volume in the industry. Four en-suite staterooms plus a day head provide a layout with maximum comfort and efficiency.  Also on display will be a 2018 53’ Tiara Flybridge, which is a West Coast debut for Tiara’s flagship model, now with the largest flybridge in its class.

Finland’s Axopar Boats launched in 2014 and is already one of the fastest growing boat brands in Europe. They are now represented on the West Coast by JK3 Yachts and the Axopar 28 TT and Axopar 37 AC will be making their Pacific Northwest debut at Boats Afloat. The Axopar 37 was awarded “Motor Boat of The Year 2017” in the category ‘Sportsboats and RIBs’ in Motor Boat & Yachting’s 2017 Motor Boat Awards.

New to the Northwest, displaying for the first time at Boats Afloat and representing all the Ferretti Group brands, is dealer California Coast Yachts. On display and a West Coast debut, will be the 27’ Riva Iseo, an Italian luxury ski boat with a sports car-like helm, hand-stitched leather steering wheel, electric operated bimini top and a mahogany deck painted with 20 coats of varnish.

Cutwater Boats will have their full lineup on display. Highlights will be the 302 Coupe and 242 Coupe. The Cutwater 242 is a versatile boat, fully cruisable, fishable, fast and affordable. The 302 Coupe is big and comfortable while still trailerable. Twin Yamaha 300HP outboards push the new double-stepped hull across the water at speeds of up to 50 mph! It’s the big brother to the 242 Coupe.

Hampton Yachts is introducing the Hampton 650 Pilothouse which boasts a three stateroom / three head layout accommodation, an inside pilothouse helm as well as a flying bridge helm with full enclosure and entertainment center, salon that opens to the aft deck with polished stainless-steel Nana folding doors, walkaround covered recessed sidedecks, stand up engine room, and a spacious and standup lazarette.

Back in Seattle after an absence of a decade or so and now represented by Marine Servicenter is Four Winns. The Four Winns Vista 375 Express Cruiser will be on display. Described as ‘one half speed boat and the other a cruiser,’ with many features from both schools of thought, she features two sleeping areas and twin Volvo diesel engines that can move her at 36 knots with a 16-gallons-per-hour burn.

Ranger Tugs will have their full lineup including their 2018 R-27 Outboard. It’s a completely new model that is powered by a 300hp Yamaha which cuts down travel time without sacrificing any of the cruising comforts found on traditional cruisers.

For the water sports enthusiasts, Seattle Boat Company will be showing Malibu’s 2018 23SLV, the world’s #1 selling wakeboard boat and the one on display will be the first to hit Lake Washington.  Also from Seattle Boat Co. is the 2017 Cobalt R30 – the largest of the Cobalt BR Series, featuring an electric actuated swim step that lowers to just below the water’s surface and a sunpad on the stern, large enough for four sun worshipers.

Silver Seas Yachts will be displaying the 2018 Maritimo 54 and 59 which feature fully-enclosed flybridges, deep well walkarounds, large cockpits, full beam Masters and fully enclosed flybridges. Also on display will be the 2018 Cruisers 50 Cantius with three staterooms, two heads, an up galley and 360 degrees of huge windows.

From Outer Reef is DOGO’S HIDEOUT, a 2014 700 Long Range as-new Motoryacht that has been boathouse-kept since new and has under 150 hours of use. She also features one of the largest flybridges in the industry.

Marine Service Center will have four new Jeanneaus in the show – the Jeanneau 349, 419, 44DS and 479. The Jeanneau Sun Odyssey 349 is one of Jeanneau’s best sellers with over 350 produced in less than four years.  She is a very modern sailboat with twin rudders, a twin wheel cockpit, a hard chine performance hull, a Square Top mainsail and ceramic ring jib lead adjustment system.

The Jeanneau 479 Performance has been in production for a few years now but for 2017 the French builder is offering a light oak interior with dark oak sole.  With the lighter wood, more modern interior the boat is super bright and cheery even on the greyest Pacific Northwest day.

The Fountaine Pajot Lucia 40 has a huge interior space with 360-degree line of sight and great visibility of the entire boat from helm. She also features a decadent lounge area on the bow that spans more than 32 square feet. She’s the only 40-foot catamaran sailboat that includes four heads.

All you need to know

Purchase your tickets online and receive free admission to the Museum of Flight, $10 to Chandler’s Crabhouse and a one-year Sea Magazine/Boating World subscription.

Getting There: Parking lots are limited near the show. For convenience, park downtown and take the Seattle Street Car directly to the show on South Lake Union.  Check out www.BoatsAfloatShow.com for parking maps, discounts and directions.