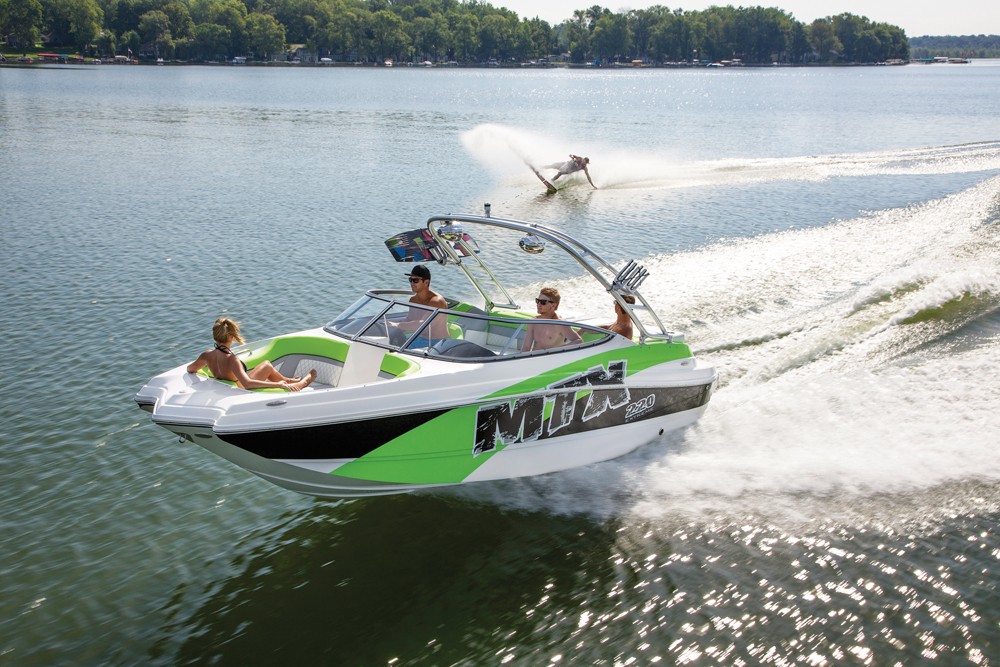 Scoring a bulls-eye on all accounts.
By Cam McRae

In the beginning (1945!) the Rinker family built little runabouts and skiffs. Runabouts you could ski behind, skiffs you could fish from.
Over the years, Rinker’s focus narrowed to their well-received line of compact cruisers. The little boats didn’t go away, but they were definitely in the background. Fast forward to 2008 when the market shifted dramatically. Cruisers are still in demand, but small runabouts re-became the rage. Rinker responded with the strikingly good-looking Captiva line and scored a bulls-eye with the little 186BR. According to Rinker, their first outboard in 25 years is “wildly successful”.
It’s not always easy to reproduce the lines and style of a larger boat in a smaller package, but to my eye the 186 is the best of a good bunch, carrying the rakish outline of its siblings with confidence. Nor does the 186’s performance disappoint. The little hull scoots around with the agility of a PWC. And, according to our friends at Len’s Cove, the 186 gets on top in about 5.5 seconds and makes 38 mph with a 115 Merc FourStroke. Plenty of speed and acceleration for skiers and tubers. (How ‘bout Mercury’s new 150!)
But you can’t really fish from it. Not conveniently, anyway. Not with the comfy cockpit layout and the lack of a livewell and fishing pedestals. Again, according to Rinker, the company received a “wave of requests” for a fishing package.
The result is the Captiva 186-OB-FS. The FS is for “fish & ski”, but I suggest “ski & fish” is more accurate. You’d never mistake this handsome, plushly padded, richly coloured bowrider for a dedicated fish hunter. But the novel FS fishing features definitely create a worthy platform for a morning’s angling.
A large aerated livewell is tucked below the rear bench. The requisite Minn Kota troller gets a mount on the bow along with the appropriate battery storage and plug-in wiring. But the truly creative part of this conversion is found in the fishing pedestals. When in “ski” mode, there are bucket seats on either side of the stern bench. Lift them out and they become the two pedestal seats. Pop out the bow cushions and drop the bow deck insert in place. There’s a socket for one pedestal up there. The other has a choice of two positions on the stern deck. (Snap-in carpet is standard on the Captiva line. I’d take that out as part of the conversion as well. Sure, it’s easy to clean, but…)
The return of small boats has also inspired a resurgence in trailering. These easy-tow craft don’t cost a fortune in gas to move around and the lure of a distant lake, and its fish, can be irresistible. The Captiva 186 FS comes with a custom EZ Loader trailer, ready to go.