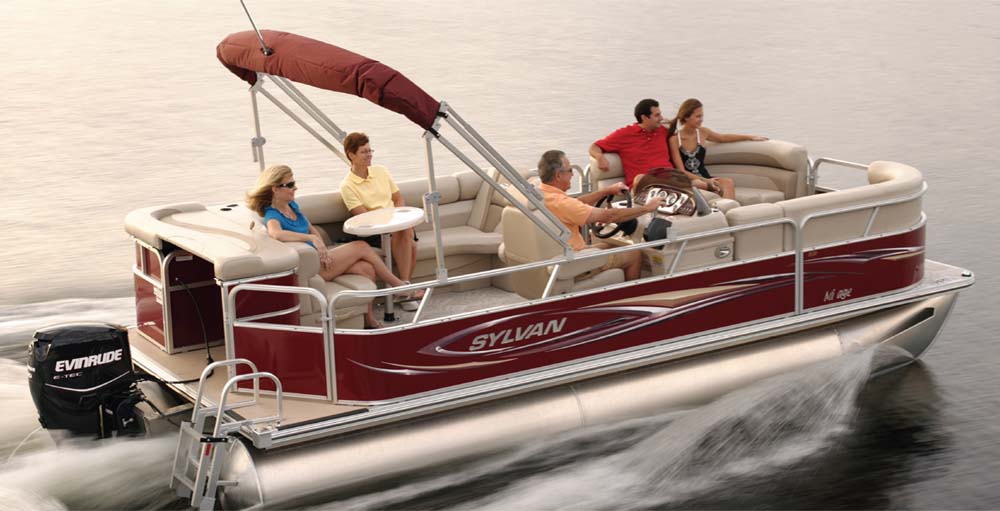 By Cam McRae and Brad Roberts

Sylvan’s Mirage 8520 C is at first glance a beautiful pontoon boat. But first glances can be very deceiving. The Mirage 8520 C has a typical floorplan layout of a stern sunpad that pops up into the changeroom, an l-shaped sofa to port opposite the single captain’s chair at the helm, and two facing bench seats forward, all in the usual quality Sylvan has become known for. And so you may be forgiven if you didn’t look beyond that first glace, peering deeper into this ‘toon. But beauty is skin deep, and more often that not it’s what is underneath that really sets this ‘toon apart in the market.
Under the deck, and under the pontoon logs, and in fact under the waterline, it’s what you don’t see that makes this pontoon so very different. Sylvan’s RPT – Revolutionary Planing Technology – has totally transformed the bottom of the pontoon tubes. Rather than being simply round as you might expect, and welding on so called lifting strakes to the outside of the round tube, Sylvan’s designers completely changed the profile of the bottom of the tube. They reasoned that if aluminum can be molded and shaped into a round design, then logically it can molded and shaped into other designs – like say a boat’s typical hull shape. Sylvan designed into the tube a true v-shaped ‘hull’ bottom. Right from the bow nosecone to the squared off end, the entire length of a Sylvan RPT tube is a flat planning surface designed to lift the tube up out of the water the same way a normal boat hull does. The result is a true catamaran – two boats lashed together – not just two logs under the raft. Tom Sawyer would be proud.
Sitting idle at dockside, the RPT tube and a normal pontoon tube respond exactly the same. But when the power is applied, the difference is truly amazing. A typical pontoon tube plows through the water with plenty of resistance, lots of tube remains in the water and thus a large wake is created. An RPT tube on the other hand, thanks to that v-bottom planning surface, lifts most of the tube up out of the water, up onto plane really on top of its’ own bow wave, so there’s far less tube in the water, far less resistance, and thus a smaller wake.
Far less resistance means that more of the power from the engine is transformed into speed. Effectively this means that you can utilize a lower horsepower engine to produce the same top end speed – thus creating a more cost efficient package for the consumer.
Power wise, strapping an Evinrude 75hp E-TEC two stroke engine to the transom of the Mirage 8520 is pure genius on Sylvan’s part. Pushing a heavy pontoon is tough service. However, the 75’s big gearcase is connected to a powerhead that employs the same bore and stroke used by the E-TEC 200. You get the spirited, torque-filled heavy duty raw power that two-cycle engines are famous for. And because E-TEC engines are also so very quiet and clean, you get none of the old blue spoke that two strokes were (unfortunately) also famous for, and none of the noise either. The lightweight (320 lbs) inline 3-cylinder 1296 cc E-TEC is Carb 3-Star rated for ultra low emissions. Back when the E-TEC was being conceived, BRP hired an MIT-trained audio specialist to engineer the new two-stoke’s signature sound – smooth! Hidden down behind the sunpad, it purrs along at either idle or wide open throttle giving you the quiet serenity of a pontoon boat.
Like to troll on your ‘toon? The 75 will idle forever, thanks to a “stratified low-rpm combustion mode” that takes over whenever you throttle back. Moreover, the RPT hulls allows the spunky two-stroke’s speed and acceleration to shine through. We don’t usually think of a pontoon’s hole shot, but an RPT and an E-TEC will out-drag and out-run the competition.
BRP’s two strokes have other advantages for ‘toon owners. All E-TEC engines will go three years or 300 hours without any maintenance. Even the iridium spark plugs last the full 300 hours. And in the fall, the 75’s AutoStorage system will self-fog the engine’s innards – protection until spring.
RPT and E-TEC are DBBW – definitely the best of both worlds.