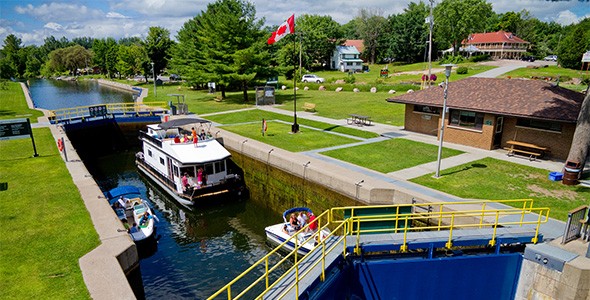 Quick Facts
The Trent-Severn Waterway is Canada’s largest national historic site spanning over 400 kilometres with more physical assets than any other. It has 44 locks, a marine railway, and approximately 160 water control structures.
The Trent-Severn Waterway is one of Canada’s most visited national historic sites welcoming more than 1 million visitors every year.
In addition to its historical value, this waterway is a crucial transportation and recreation link for the region.
Successive groups of Aboriginal people travelled the ancient natural waterway formed by the waterway lakes, thousands of new Canadians were employed in the construction of its locks and dams, and today countless people benefit from the tourism economy that it affords.
“Our Government is committed to connecting Canadians to nature. The Trent-Severn Waterway welcomes boaters and tourists every summer and is an excellent example of how Canada’s heritage is directly linked to nature and the outdoors. The Trent-Severn Waterway directly contributes to the local economy and through investments such as today’s, our Government is ensuring that the Waterway can continue to play its vital economic role in the role in the region,” The Honourable Leona Aglukkaq, Minister of the Environment and Minister Responsible for Parks Canada
“With these investments our Government will be creating and protecting jobs and opportunities by renewing visitor facilities in our national parks and national historic sites. This will allow Canadians to have a greater connection to our protected places,” Rick Norlock, Member of Parliament for Northumberland–Quinte West
“This waterway has always been crucial to the people of this area. This major announcement will strengthen and grow the local and regional economy as we increase tourism opportunities throughout the Trent-Severn Waterway,” Daryl Kramp, Member of Parliament for Prince Edward—Hastings
“This unprecedented commitment to the restoration and renovation of the waterway’s infrastructure demonstrates our government’s understanding of the economic, recreational and historic benefits the Trent-Severn Waterway brings to our region and to all Canadians,” Bruce Stanton, Member of Parliament for Simcoe North
“I am delighted our Government is investing more than a quarter of a billion dollars in the Trent Severn Waterway. Today’s announcement acknowledges the critical importance of this water management and navigational infrastructure for central Ontario,” Barry Devolin, Member of Parliament for Haliburton—Kawartha Lakes—Brock