The Return of Power – Gananoque 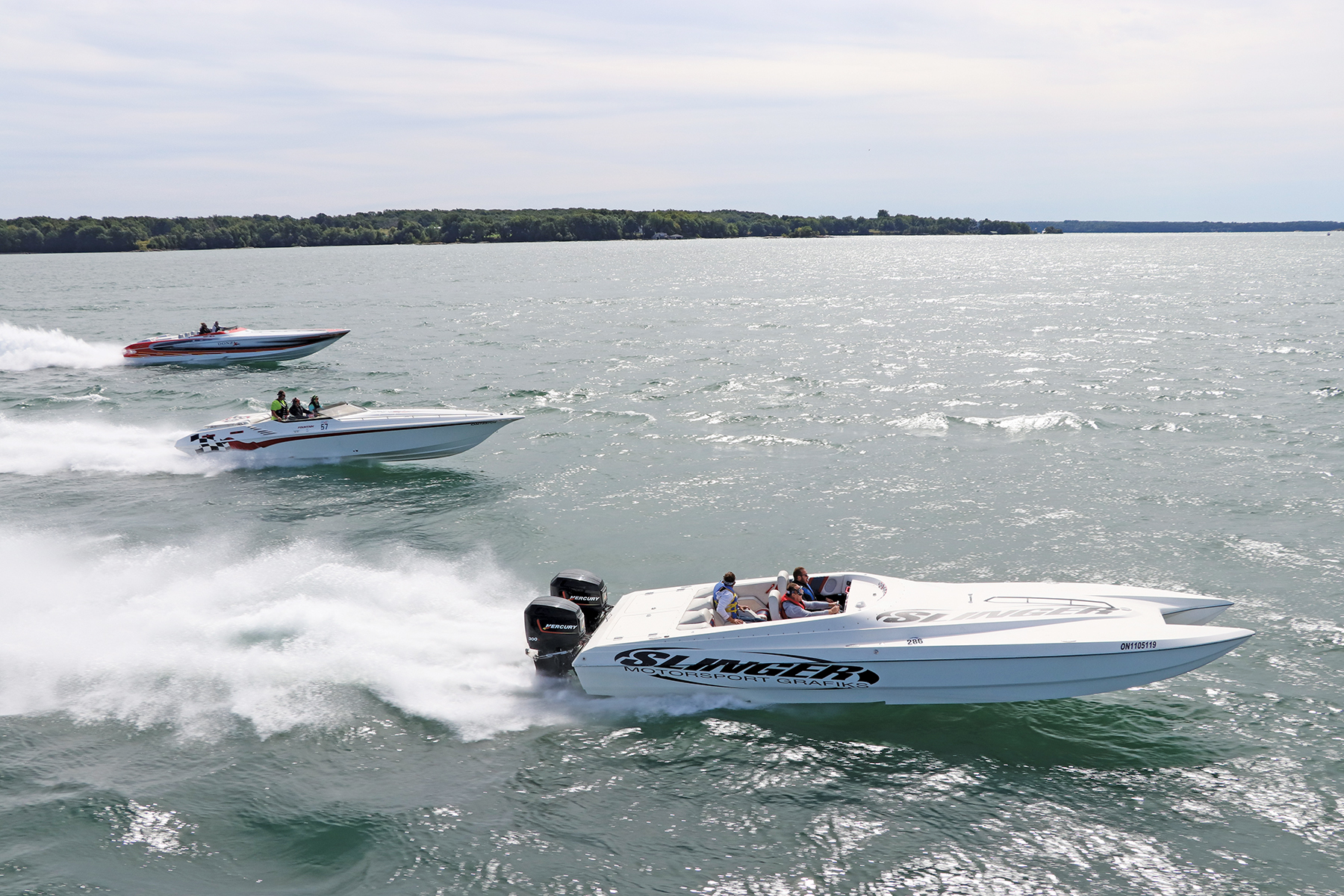 It was almost 20 years ago that Power Boating Canada and Poker Runs America joined forces to bring the first international poker run to the 1000 Islands and St. Lawrence region.  Gananoque served as the original home of the 1000 Islands Poker Run and played host to some of the largest poker runs of all time.

In 2002, a record breaking 149 boats and over 45,000 spectators showed up for the Poker Runs America/Power Boating Canada 1000 Islands Poker Run, hosted in Gananoque, Ontario.  This event was easily the most popular run on the annual Poker Runs America/APRA circuit.

Here we are, 30 years later in the year 2018, returning to the place it all began: Gananoque, Ontario. This year Poker Runs America brought a whole new dimension to the weekend of exhilarating boating action to Gananoque: Poker Run on Saturday, Race on Sunday.

It all kicked off on Friday night with a welcome party at Moroni’s Family Restaurant in Gananoque.  The staff at Moroni’s went out of their way to accommodate the attendees, with a large 50 ft. bar, plently of hors d’oeuvres to go around and the simply outstanding band. “No Fluff,” comprised of members of Chickenwire, played an outstanding set at Joel Stone Park. The attendees partied into the wee hours of the morning, much like they did 16 years ago.

On Saturday Morning, Jeff Brown was kind enough to open the doors of his Comfort Inn to host the driver’s meeting for the event. At the meeting, the decision was made to alter the route.

The weekend prior, a freak accident on the St. Lawrence resulted in the loss of an 11-year-old boy after the boat he was in capsized.  The efforts to recover him were still underway at this time, with divers and police operating in the Rockport area.  In order to not interfere with the operations, as well as show respect for the family in the extremely trying time, the decision was made to alter the poker run route.  The route would no longer be heading out towards Rockport, instead heading west after the first card stop at the Ivy Lea Club Docks.  Members of his family attended the drivers meeting and showed their appreciation for the move.

The boy was finally recovered nearly a month later after exhaustive searching.  Poker Runs America would like to extend their thoughts and prayers to his family and everyone who has been affected by this tragedy.

The poker run departed from Gananoque and headed eastbound, through the narrows, traversing the water towards the first card stop at the Ivy Lea Club Docks.  The weather was absolutely spectacular for the first leg of the run.

After the first card, the poker runners departed and headed west towards the Adolphustown Ferry Docks, the site of the second card stop. From there, the runners headed east again, as they descended on Kingston for the lunch stop. On the way to lunch the runners encountered a little bit of chop, about 1.5ft, giving the chance for the boats to catch some air.

Chris Fountas from the Blu Martini opened a special room and set the stage for lunch, which was originally planned to be held in Prescott, but had to be changed in accordance with the new route. The Legion in Prescott still catered the meals but shuttled them all the way down to Kingston to the Blu Martini.

“I don’t know how they did it,” saidTaylor. “But, by the time we showed up at Kingston the lunch prepared by the Prescott Legion was waiting for us.  I cannot thank Chris from the Blu Martini and the Prescott Legion enough for accommodating us and our route change. The lunch was absolutely delicious, and the desserts were exquisite.”

After a delectable meal, the poker runners set off in a mass start, heading back towards Gananoque.  The route took the runners through the Bateau Channel which provided some beautifully calm water, only a ripple to be seen.

Upon the return to Gananoque, the boats were tied up and the poker runners enjoyed a few beverages prior to the awards ceremony.  The Thousand Islands Boat Museum graciously granted PRA use of their docks for the weekend.  This was no small feat, as the museum hosts a small fleet of historic boats at these docks throughout the season.

The Poker Runners then made their way up to Moroni’s for a lavish Italian styled dinner.  Participants dined on steak, salmon, pasta and received a dessert that required they be carried home after.  Participants partied all night long, again with a simply outstanding band providing the soundtrack for the night.

The highlight of the evening was the charity auction emceed by Dave Turnbull, participants opened their hearts and graciously donated to the family of the missing boy.  In this spontaneous act, close to $2,000 was raised for the family.

After the card hands were revealed, Jason Steacy and his 32’ Baja Dig This took home the gold with a 222JJ hand.  Second place went to Cody Watkins in his 38’ Donzi with 777J10 and third came John Lutz in a 33’ Scarab 2 Fasst 4 U, with a pair of queens.

Poker Runs America was extremely thrilled to return to Gananoque this year.  This is the place where it all began, and it was fitting, in our 30th year that we would return. It felt like a homecoming.

It took a village to pull this event together, and we cannot thank those enough who helped turn our vision into a reality.

“Normally, it takes us two years to get an event off the ground and turned into a successful outing,” explained Bill Taylor, President of Poker Runs America. “However, this new Gananoque event got off the ground quickly because of the incredible backing we got from the community.”

Poker Runs America would like to thank everyone who made this weekend possible, without their tireless efforts, this event would not have been possible.

Poker Runs America will be returning to Gananoque on September 6-8 2019, continuing the “Poker Run Saturday, Shootout Sunday” concept, and we hope you all will join us as we expect this event to grow much larger, rivaling the turnout from the glory days.