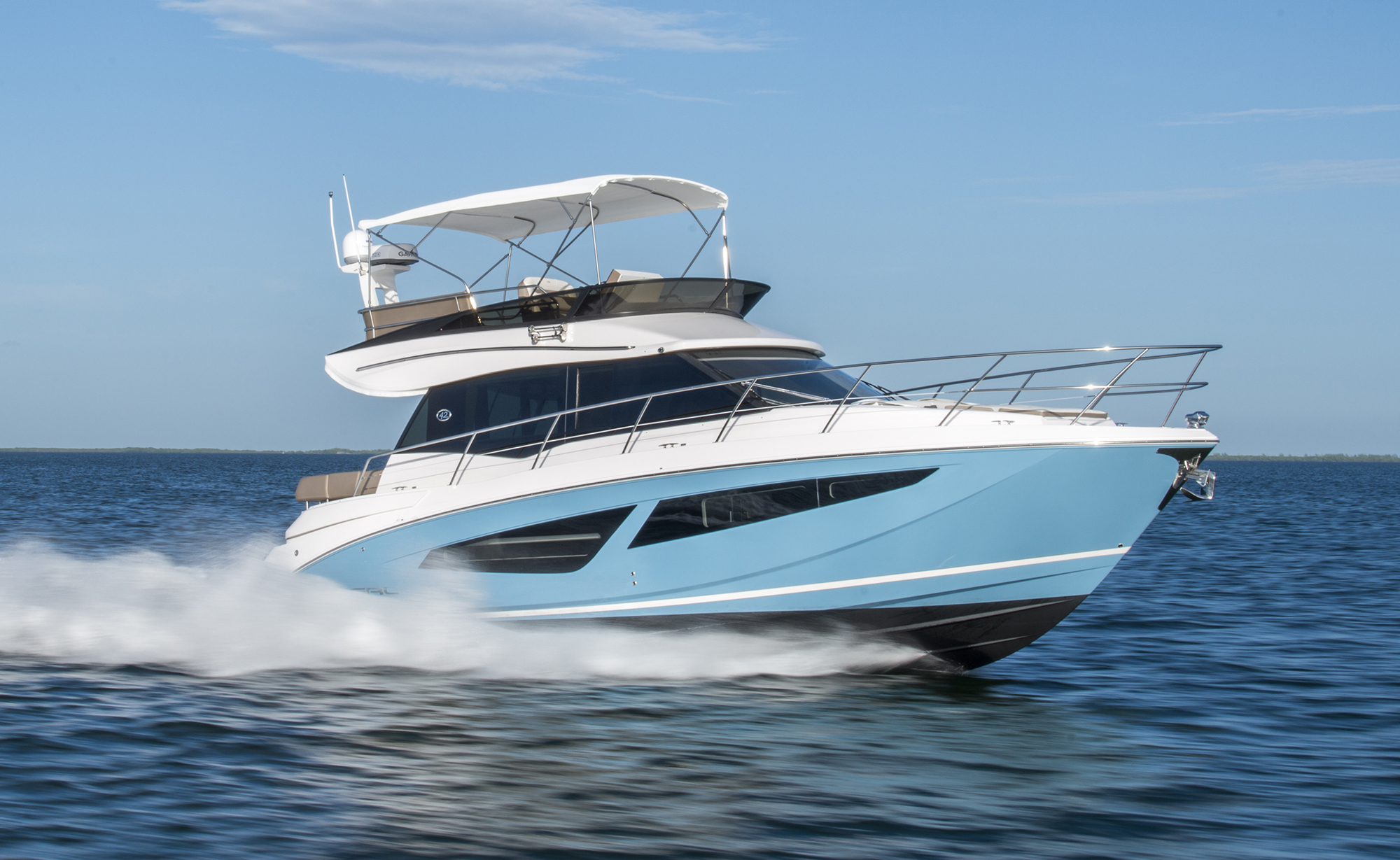 An innovative flybridge that’s perfect for weekend or extended cruising with family or friends. 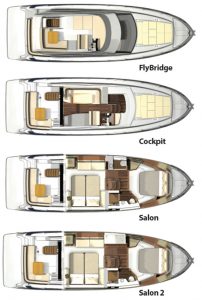 A mid-forty foot flybridge sport yacht isn’t exactly what anyone the least bit familiar with the boating business would call a new idea. However, while it may not be a new idea, there are new ways to look at an old idea.

That’s exactly what Regal Boats has done with their new 42 Fly model.  It’s the only flybridge in the entire Regal lineup – a new step for Regal Boats – but it has some very innovative and forward-thinking features.

Let’s start up on the flybridge – the centerpiece of this yacht.  Regal has taken the traditional two-chairs-with-little-room-to-move-around flybridge design and modified it extensively.  Immediately to starboard as you come up onto the flybridge you’ll find a beautiful wood table top and an l-shaped bench with storage space underneath. This area is perfect for an afternoon lunch – with the easily accessible cooler drawer (a $1400 option) right beside the starboard seat under a large Corian countertop prep area.  Forward, and on the traditional starboard side, you’ll find the sliding and double-wide bench helm seat. The helm itself is fully functional with all the controls and Volvo’s Glass Dash which incorporates a Garmin multi-function display that eliminates all the gauges so it’s easy to keep clean. Given the comforts, equipment and the view, this is obviously the preferred location to pilot this yacht from. To port, a double-wide co-captain’s bench seat features a nicely padded bench directly in front of it that can double as either a place to roll out the paper charts or for another person to sunbathe. By lowering the port-side bench seatback, you can create and even larger u-shaped sunpad. By my count, that’s at least five places to sit or recline right around the helm – clearly the designers at Regal understand what’s required to make both family cruising and entertaining another couple aboard enjoyable for everyone – Captain and guests.  The entire flybridge lies under the overhead bimini but there are no side curtains.  The bimini could be replaced and side curtains added – an important aftermarket consideration for our bug season here in Canadian waters. From the helm, the port side aft corner isn’t visible, even through the stairway hatch, so if you want or need to back into a slip you’ll likely need to do it from the lower helm.

Heading down to the cockpit, the first thing you’ll notice is the open stairs – beautiful wood on a gleaming stainless steel single pole complete with blue LED courtesy lighting over each stair tread.  The open design affords a couple of things, first visibility is increased both from the cockpit and from inside the cabin. There isn’t this massive fiberglass wall that is the staircase to block the view like on some flybridge yachts. Secondly, while the wood requires an occasional wipeover with oil to preserve it, it beats cleaning and waxing a large area of fiberglass. Walking up the open stairs does require some getting used to however.

The cockpit itself is located to starboard, with a port side walk through transom door, an aft bench seat that wraps around and up the starboard side to the outdoor grill.  A seat cushion and seatback can removed to create a step to access the starboard sidewalk to the bow. There’s good storage space under the seats.  Down on the swim platform you’ll find more wet storage in the transom, and a telescopic fold-out swim ladder under a hatch to port. Optional upgrades include a fold out swim step in the middle of the platform, or an entire hydraulic platform.

Moving forward, before we head inside, the sidewalks on the 42 Fly feature beautiful stainless rails and a grab rail mounted to the side of the flybridge. On the raised bow deck, you’ll find a very unique sunpad with the v-berth hatch in the middle. There’s still room for two adults to comfortably stretch out flat, or raise the aft section of the sunpad to create a forward facing sunlounger, or raise the mid-section of the sunpad to create a forward facing seat. The stereo remote and cupholders are on either side.  Up at the bow you’ll find three hatches. The windlass and anchor roller are in the middle hatch, the outer two are deep enough for fender and rope storage. The search light is mounted far forward on the deck so it won’t have any interference and its light doesn’t reflect back off the deck. An optional sunshade for this area is available and increases the living space considerably.

Inside the cabin, through glass doors that slide right out of the way to seamlessly make the inside flow with the outside, you’ll find a unique layout. To starboard an entertainment sized galley includes two-burner electric stove under a cover, a single sink, fridge and storage. Opposite, a raised u-shaped bench around a two pedestal table provides indoor seating for dinner on a bad weather night.  Forward, the lower helm features a sliding window to look out and see down the entire starboard side, and the joystick is conveniently located right there on the window ledge. The lower helm is as equally well equipped as the upper helm and provides a stunning view all around – including out the port aft quarter by looking through the open staircase to the flybridge. Very large windows all around, feature pull down blinds for privacy (or sleeping purposes if you use the dinette) and the massive cabin space is open and inviting.

Downstairs, via the hardwood stairs and the open air atrium under the massive single piece front windshield, you’ll find a kitchenette to port opposite a head in the standard layout. Optionally, you can replace the kitchenette with a second head.  The official master stateroom is forward and features a centre v-berth queen-size bed with storage underneath, large hull-side windows and a large overhead hatch. The ensuite head is to starboard with separate shower. The guest stateroom is accessed to port at the aft end of the kitchenette countertop.  This stateroom features a king size bed that can slide apart into two singles, a port side setae, and large hullside windows for plenty of light.  The door to the guest stateroom is unique – it closes by sliding to port out from the bulkhead and then the lower portion of the door lowers to close off the space fully.  Optionally, you can replace the lower galley/kitchenette with a second head accessed from the guest suite.  Personally, I’d use the king bed as our full-beam master suite and opt for the second head, giving our guests the v-berth with their own head – and a second door to make it the day head. Hauling my groceries down to the lower galley would not be on my list of fun things to do once aboard.

Performance for the 42 Fly is provided by your choice of two Volvo D6 diesel engines: IPS 500 providing 740 horsepower, or the IPS 600 with 870 horsepower. You can expect a maximum speed of around 35 knots and a comfortable and fuel efficient cruise speed around 27 knots. The SeaKeeper gyroscope will keep the rough seas at bay.

The Regal 42 Fly will sleep up to six adults comfortably, yet is yacht certified so technically the number of guests you could have on board would only be limited by the number of appropriately-sized lifejackets you had available.  She’s a great example of a mid-forty foot flybridge yacht perfect for a family or a two-couple boat for both weekend and extended cruising – or an equally capable live aboard for the Great Circle Loop. 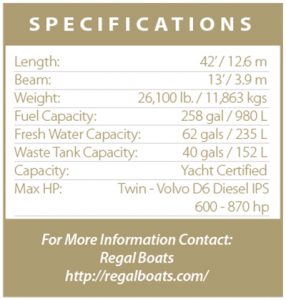