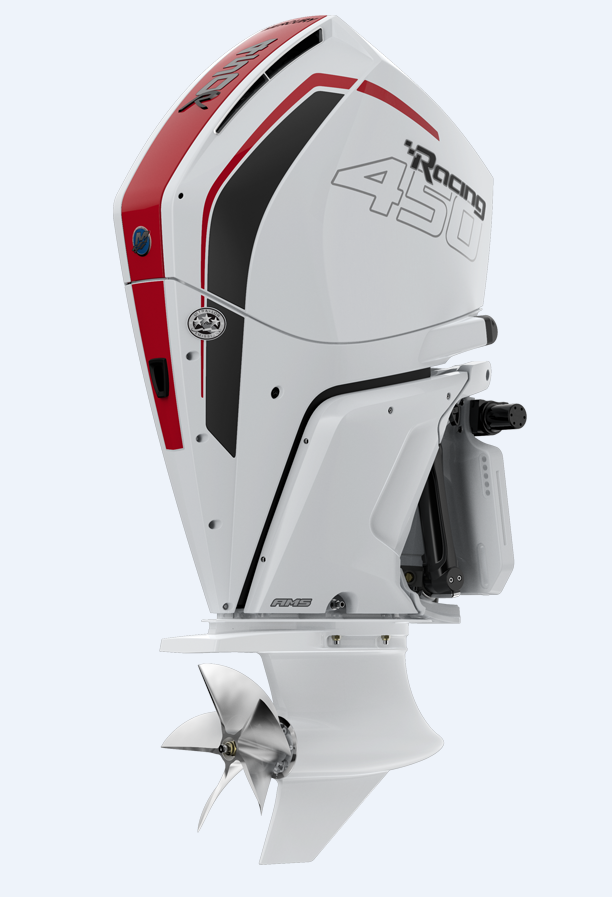 Mercury Racing has unleashed its new 450R outboard with much fanfare, a supercharged 4.6-liter V8 that produces 40 percent higher torque than its sister 400R outboard.
Power Boating Canada was on hand as the company unveiled the outboard during a media event Tuesday June 18th, in Nashville, Tennessee, to showcase the outboard that was more than three years in the making. The new 450R outboard will have instant appeal to center-console and high-performance boat owners who are looking for a powerful but lightweight outboard engine package.
“This was established for our customers because they want bigger boats and they want a small lightweight package and that’s what our team focused on,” said Stuart Halley, general manager for Mercury Racing. “It’s just the great result that a company like Mercury Racing can provide and where you’ve got guys with that passion and dedication.”
Mercury Racing showcased the new 450R with 10 boats powered with the new outboard during the company’s media event on the Cumberland River in Nashville. From a twin-engine Wright Performance 420 Cat to Cigarette Racing’s Tirranna 59 with six engines, the power package delivered strong acceleration and top-end performance.  Sea Ray’s SLX 350 Outboard wil feature a limited-edition SLX-R package that will now come standard with two of the new Mercury Racing 450R engines on it’s transom. 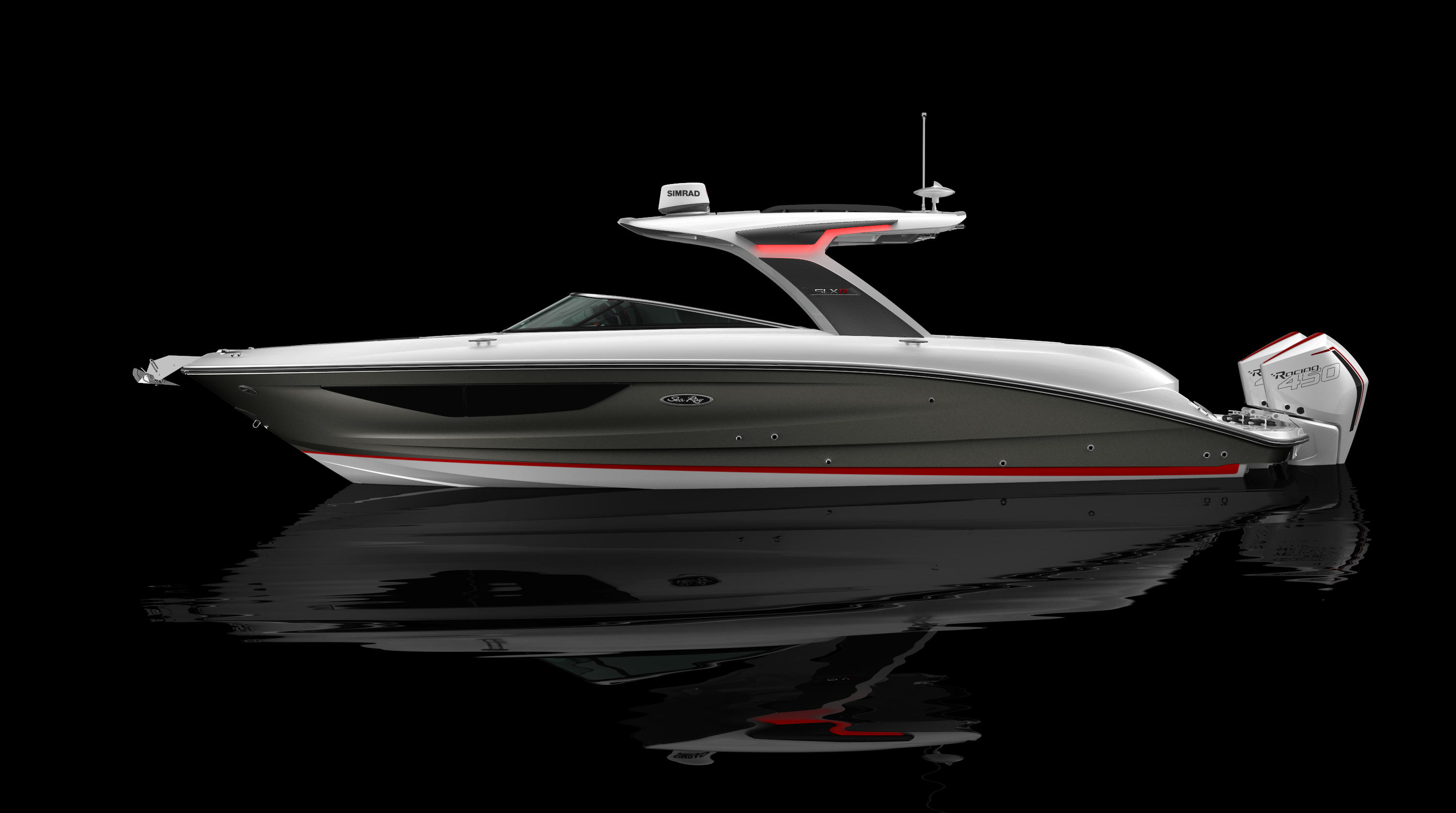 The Fond du Lac, Wisconsin, company used the architecture from its 350R to design the new 450R. The proprietary 64-degree aluminum block is topped with aluminum cylinder heads with a Mercury Racing Quad Cam Four Valve (QC4) design and double overhead camshafts (DOHC). The valve train features a high-performance intake cam profile and race-spec Inconel exhaust valves. The camshafts are chain-driven and run in an oil bath so there is no timing belt to maintain.
A 2.4-liter belt-driven twin-screw supercharger delivers pressure charging with zero lag for instant throttle response. The best part for consumers is the 450R runs on 89-octane fuel.
“We don’t just launch engines, we launch platforms,” said David Foulkes, CEO of Brunswick Corp., which owns Mercury Racing. “Platforms have expansion capability and this one always had expansion capability. We’re pushing it and pushing it.”
Engineers had to work within the restraints of the existing 350R cowling, said Jeff Broman, director of engineering for Mercury Racing. If the company were design a new cowling, the project would have been delayed years and require additional investment.
“The biggest challenge for us was packaging,” Broman said. “It was difficult getting it all to fit inside this really tight package. A lot of iterations in CAD and it was pinching millimeters.” 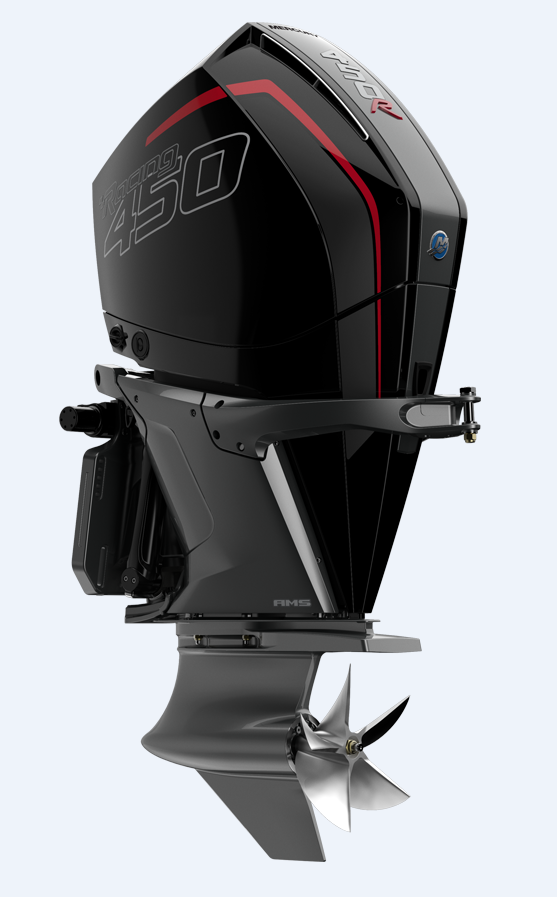 Mercury Racing said the 450R is more than 300 pounds lighter than the nearest competitor and its power-to-weight ratio is unmatched. Broman said engineers looked at each part to shave weight and the result is a 450R outboard that weighs 689 pounds.
During demo rides in center-console boats and performance catamarans, the new outboard delivered as it was put through its paces. Instant throttle response and the power was smooth all the way up to the top rpm range of 6,400.
Trond Schou, owner of Nor-Tec High-Performance Boats in Fort Meyers, Florida, calls the torque on the 450R “amazing” and accelerates like a small boat. Schou said the torque will appeal to buyers more than top-end speed.
“If you don’t mind spending the money, this a fantastic package,” said Schou after running the 450 Sport four 450R outboards. “I see a lot of people going with the quad setup on the 39, they’ll choose to go with three instead.”
The 450R accommodates 26-inch center-to-center mounting on multi-engine transoms, ideal for maximizing transom space on new boats or re-powers. Mercury Racing is backing the engine with a two-year warranty and an additional five years is available.
Another neat feature is owners can run the engines in a quiet mode or with the touch of a button can allow for a throaty high-performance sound.
The 450R is available with two gearcase options. The surface-piercing Sport Master gearcase, which is for boats fast than 85 mph. The outboard is also available with a 5.44 HD gearcase for lower-speed and traditional submerged applications.
Mercury Racing has been building the outboard since March and started shipping the engines on Tuesday to manufacturers. Steve Miller, director of marketing, sales and service for Mercury Racing, said the engines this year will go to select boatbuilders with a wider audience in 2020.
“We have been working on building a bit of an inventory bank so that when we release the product, we’ve actually got product to ship,” Miller said.
The MSRP for the 450R is $53,000 to $64,000 US. Watch for a Hands-On Test Report in an upcoming issue of PBC.