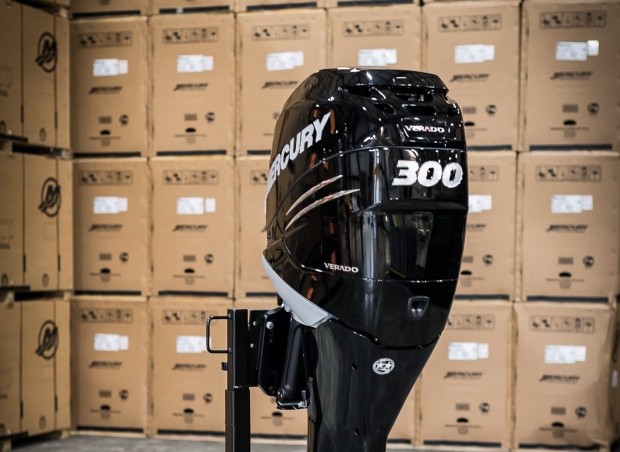 Mercury Marine, the world leader in commercial and recreational marine propulsion and technology, has produced its 75,000th Verado L6 outboard engine – reaching this milestone in less than 10 years after the launch of this engine platform. The Verado six-cylinder was first launched in 2005 and covered 200 to 275hp; the Verado family now includes up to 300hp outboard engines. Mercury Marine has manufactured more than 15 million engines since the company was founded in 1939.
“The Verado is a one-of-a-kind engine – a revolutionary outboard that continues to deliver an experience unmatched by any competition,” said Mercury Marine President of Global Sales and Marketing Kevin Grodzki. “Our Verado L6 is the lightest, fastest and best high-horsepower outboard option in the marketplace, and our goal was to redefine the boater experience with the perfect balance of performance, fuel economy and driving experience. And strong market demand has indicated that we have achieved those goals.”
Mercury Marine president John Pfeifer made the official announcement during the company’s 75th anniversary celebration last weekend in Orlando. Officially, the milestone engine was completed the evening of Sept. 22.
“It’s an incredible milestone to reach 75,000 in our 75th year,” said Mercury Marine president John Pfeifer. “The Verado name stands for excellence, reliability and dependability, and our customers know that the next 75,000 will have those same qualities. The engine family has been very popular in a wide variety of recreational applications, as well as in the commercial and government spectrums, where the Verado gives officials the perfect power behind their boat to get their jobs done efficiently and quickly, while providing unmatched fuel economy.”
The Verado platform is versatile across a wide variety of applications, from multi-engine offshore boats to single-engine freshwater fishing boats to premium pontoons. Its versatility is showcased with the many extensions to the lineup, including joystick piloting for outboards and White Verado outboards.
For the saltwater tournament angler or sport boater, the supercharged FourStroke offers extra hole shot, powerful mid-range punch and the top speeds pros crave. Adding to the performance is the Verado’s Digital Throttle and Shift (DTS) and electro-hydraulic power steering, both of which provide automotive-like ease and precision handling, a superior feature for bass anglers, commercial, recreational and government vessels.
For more information visit www.mercurymarine.com