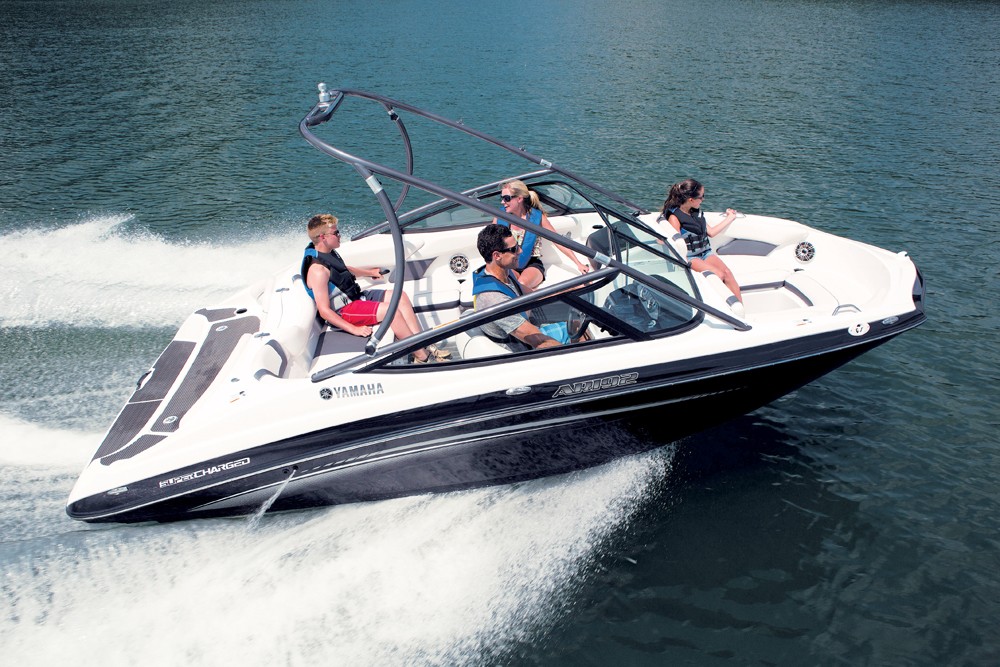 Unrivaled in her class.
By Brad Roberts

Unfortunately this past fall there wasn’t a Yamaha Media day where members of the press get a first-look – and first-test – of the new-for-2013 models of both boats and engines. Of course, that maybe because Yamaha reps shared with us that a new 2013 model simply wasn’t available anywhere in Canada, and wouldn’t be until darn near January. They were hoping it would arrive just in time for the Toronto Boat Show. Fingers crossed.
So it looks like both you the reader and I the Editor will get to see the new model at about the same time. And we’ll both have to wait till break up next spring to really test it. Fortunately, I did get an extensive test last year on their then-new SX190 sportboat, a sistership to the AR190.
The 2013 AR192 is the wake board tower version of the SX 192 sportboat. Both models have at their heart a supercharged and intercooled version of Yamaha’s time-proven and simply wonderful to drive marine powerplant. This 4-stroke, 4-cylinder, 1812cc, 16-valve engine creates – with just four cylinders – more pep and power than a typical six cylinder engine while preserving the fuel economy that four cylinder engines are known for and that everyone is after these days. This engine is specific-built for this boat – it’s not a marinized version of some other Yamaha engine. It sits low in the bilge and doesn’t intrude into the cockpit, and there’s still plenty of space around it for servicing.
Both the AR 192 and the SX 192 are single engine boats. Single engine jet powered boats to be more precise. The stream of water is tons of fun out in the open, and the lack of a sterndrive means a shallower draft and a safer experience overall. But get into close quarters around a dock and you’ll find that maneuvering with a water jet is in actual practice sort of a controlled slide with about as much real traction as dress shoes on ice. In comes Yamaha’s very intuitive (as long as you remember to turn it on!) 3-speed “No Wake Mode” and new Thrust Directional Enhancer technology. Combined, they increase the engine rpms and direct water flow at an optimum angle creating more responsive handling as the wheel is turned at slow speeds. It takes only a couple of tries at docking to look and feel like a pro. Plus it’s fun!
With the engine small and low in the bilge, the space gained from where a typical larger sterndrive engine would be is well used and Yamaha boasts more interior space than any other nineteen foot boat on the market. Of course there’s no sunpad over the engine, so the swim platform seats – that are so unique to Yamaha boats – back right up against the stern seatback in the cockpit. Twin mid-back helm and captain chairs, and large forward seating in the bow provides space for up to 8 people.
Last year I recorded a time to plane of a surprising 3 seconds with the non-supercharged and intercooled version of this engine, so I expect less than 2 seconds from zero to gone – but actual results will have to wait till spring.
Taking a page from Henry Ford, the AR192 comes in only two colours: red and black, and there are no available options except to upgrade the standard painted trailer to a galvanized one. Marketing simplicity. Now if they can just get one here in time.