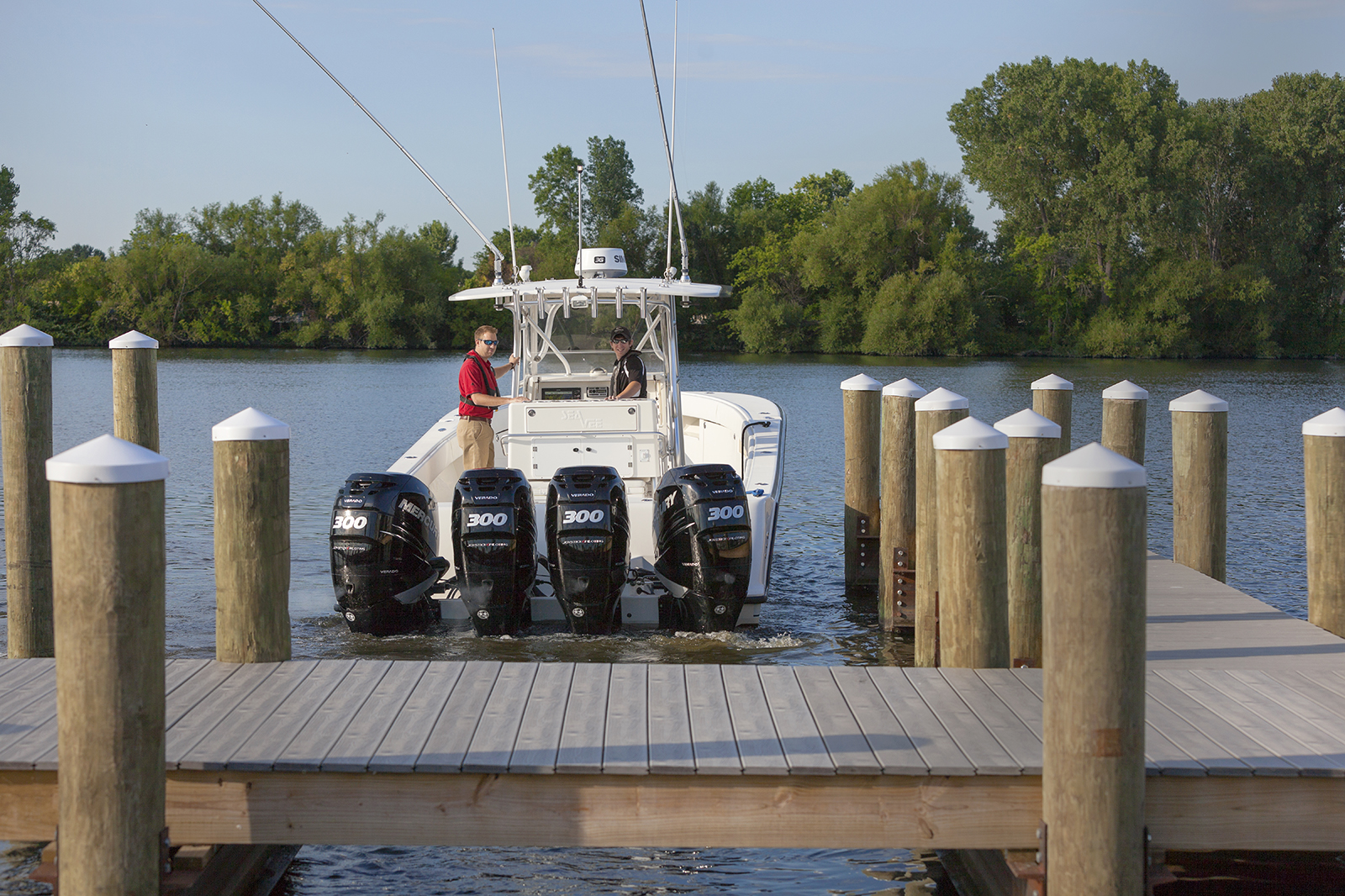 This all-new collaborative solution from Mercury and Raymarine makes docking easy for anyone.

Story and Photos By Craig Ritchie

For many new boaters docking can be the most stressful part of any day on the water. But an innovative assisted docking system, called Virtual Bumper, from Mercury and Raymarine makes it easy for even beginners to look like old pros at the helm.

Boating is supposed to be fun. Yet many boaters – and especially those who are new to the boating lifestyle – feel nervous and intimidated when it comes time to return to the dock. That’s especially true if there are gusty winds to make the job tougher, unpredictable currents to make it more challenging, or there are simply lots of people milling about, all prospective witnesses to a catastrophe should you blow it.

It’s even more stressful if you’re in a new or unfamiliar boat, or you simply haven’t been out in a while and might be a little rusty. I should know. As a full-time boating writer, I’m constantly driving different boats that I’m not at all familiar with, using all sorts of different engine set-ups and controls, always in unfamiliar waters with no idea of which way the currents run or how those wind gusts might impact my approach. Although I’ve been driving boats for almost 40 years, the hair on the back of my neck still stands up every now and then when approaching the dock in an unfamiliar vessel – especially pricey ones that belong to someone else.

Wouldn’t it be nice if someone could develop a docking assist mechanism, like the parking assist features they now have for cars?

Sure would – which is why I was so happy to receive an invitation to travel to Mercury Marine’s legendary Lake X proving ground in Florida recently, in order to experience an all-new assisted docking system that they’ve developed in collaboration with Raymarine.

Welcome To The Future

I don’t usually make such bold statements, but this merits an exception. Mercury and Raymarine’s docking assist system – called Virtual Bumper – represents the future of boating. There, I said it and it’s the truth.

By combining Raymarine’s innovative DockSense technology with Mercury’s Advanced Pilot Assist (APA) system, we have an assisted docking platform that literally makes it impossible for the boat operator to ram the dock or hit other parked vessels while navigating into the slip. The Raymarine DockSense system uses a series of stereoscopic cameras mounted around the boat to provide 360-degree coverage that can actually measure the distance to any objects they see. This allows the cameras to be used to create an electronic Virtual Bumper by establishing a protective perimeter around the boat. With the Virtual Bumper you still control the boat – it’s an assisted docking system, meaning the skipper is still in charge. But the cameras monitor your progress, and protect you against a sudden gust of wind, a blast of current, or when you simply flub it. The size of the bumper is user-adjustable, with a default setting of three feet. If any foreign object breaches that perimeter, the system automatically interacts with Mercury’s APA system, takes over the controls and maneuvers you out of harm’s way. It’s a very simple approach to a complex problem, and I was excited to have an opportunity to try it first-hand.

At Mercury’s Lake X facility, our test boat was a brand-new Boston Whaler Outrage 330, rigged with a pair of Mercury 300s on the transom. Its gleaming white gelcoat was absolutely spotless – not a scratch or blemish to be seen anywhere, and I fully intended to keep it that way. 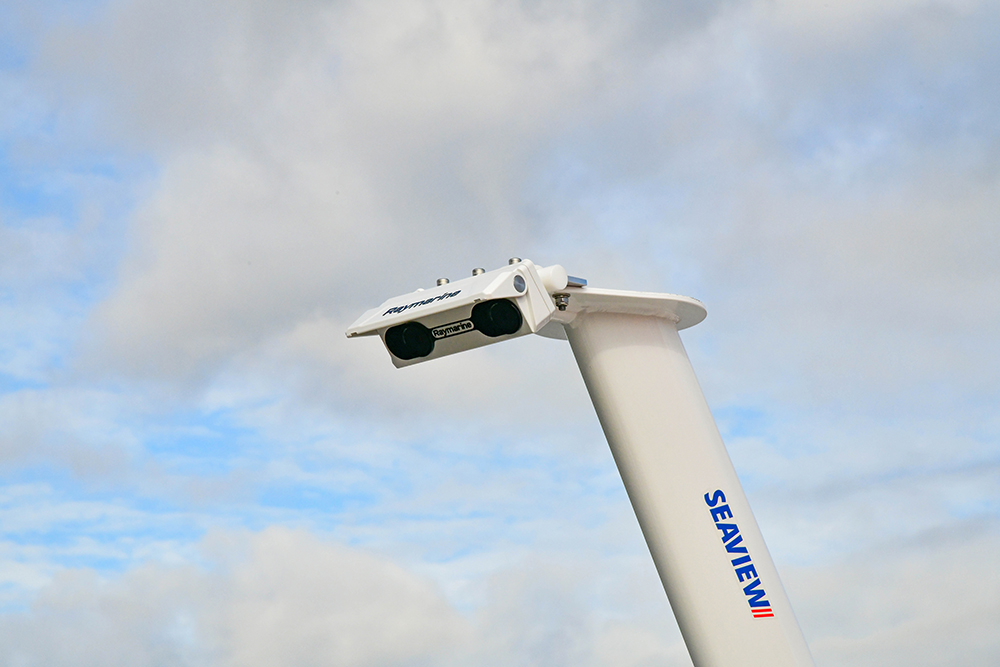 “Mash It Right Into The Concrete”

Although I’d known about Mercury’s legendary Lake X testing facility for years, this media trip represented the first time I had ever actually visited the site. It looked exactly as it does in all of the historic photos – a large main building with its bubble-shaped windows and aircraft hangar-like doors, connected to the open lake by a long, concrete-lined channel with a large turning basin at the shoreline end. The lake end of the channel is dominated by that iconic, George Jetson-like control tower standing at the end of a long pier.

Our demonstration of the Virtual Bumper system would take place within the turning basin, where we had an expanse of concrete sea wall to work with. On the opposite side of the basin, Mercury rigged a small wooden finger dock so it jutted out perpendicular to the sea wall. While the sea wall rose perhaps three feet above the water’s surface, the little wooden dock sat low to its surface, providing a couple of distinctly different docking scenarios for us to experiment with.

After an introduction to how the system worked, I was given a simple challenge – try to deliberately crash that sparkling new Outrage 330 into the cement sea wall. “Seriously,” said my host, Mercury Marine president John Pfeifer. “See if you can mash it right into the concrete.”

I gave the joystick a nudge, the twin 300s on the Whaler’s transom responded, and the boat obediently slid sideways out into the middle of the turning basin. Tapping the joystick forward and giving it a light twist to the left, I turned the boat and began making my way to the floating finger dock on the opposite side of the basin to see what this system would do. As we approached the dock, I pushed hard on the joystick to power the boat forward, headed straight for the concrete sea wall at the dock’s base. The twin 300s hummed, and as expected the big Whaler surged ahead. Just as I feared it really would hit the wall, the engines kicked in all on their own and stopped it dead in its tracks, about two feet shy of the wall.

At my host’s encouragement I hit the joystick again but this time, nothing happened. So I nudged it yet again, more firmly this time, again with no result as the boat simply refused to move forward into the concrete. Okay, I thought, that’s pretty cool.

So I gave the joystick a quick twist instead. If the Virtual Bumper wouldn’t let me kiss the seawall, perhaps I could sideswipe the finger dock. But no dice. No matter how much I tried, pushing the stick forward, sideways or trying to spin the boat within the slip, it wouldn’t let me hit anything. As I sat neatly centered in my chosen slip, the only control input the engines would respond to was to reverse back into clear, open water.

Dissatisfied by that failure, I backed the boat out of the slip, spun it around 180 degrees and took another try – this time aiming to back into the seawall. The boat slid into its slip alongside the finger dock and kept on reversing as I held the joystick firmly in the reverse position. Once more, just as I expected to hear the horrible sound of propellers meeting cement, the boat shifted into forward gear all by itself – in spite of me still holding the joystick as far back as it would go – and stopped dead in the water about two feet from the concrete. Foiled again.

Once more I pulled out of the slip, spun the boat slightly, and this time tried to back into the low-lying wooden finger dock. Yet again, the system stopped me from doing so.

Since I wasn’t getting anywhere with my attempts to hit the wall or the finger dock, I pushed the joystick straight forward, commencing a headlong run at the concrete seawall on the opposite side of the turning basin, thinking that perhaps if I came in faster I might make contact. One more time, the Virtual Bumped kicked in and saved the Whaler’s skin – along with my pride.

In fact, it was only after I selected a specific button on the controller that the Virtual Bumper system let me bring the Whaler those final three feet to actually tie up at the dock. And once there, it neatly held the boat in place, giving me plenty of time to attend to the lines. For someone boating solo on a windy day, this feature alone makes the Virtual Bumper very special indeed.

Innovation For The Future

Back on dry land, I sat back to watch as a steady stream of other boating writers each took their turn at the Whaler’s helm and did their best to ram it into the sea wall, the finger dock, and even other boats. Each of us returned to the dock with the same results, and that beautiful white Whaler ended the day with its gelcoat intact, pristine and undamaged.

Integrating Raymarine’s DockSense assisted-docking technology represents a natural next step for Mercury, said John Pfeifer, who sees it as an extension of the company’s Zeus joystick piloting system introduced in 2007, Axius system for sterndrives introduced a year later, and joystick piloting system for outboards introduced in 2013. All three joystick systems deliver unparalleled control and performance, he says, and all three were developed as precursors to autonomous vessel control. “This demonstration extends Mercury’s role as the leader in marine propulsion,” he said. “Our future is focused on innovation and inspiration on the water. We are positioned on the cutting edge of autonomous piloting and other new technologies and will continue to deliver better boating experiences to our customers.”

For now, Virtual Bumper remains a prototype concept that is still in development. But make no mistake, even though it’s not yet on the market, assisted docking technology is going to revolutionize boat handling in the very near future.

At the Miami Boat Show, the system was demonstrated on the same Boston Whaler 330 Outrage, as well as a Prestige 460 motor yacht. It really works, and I doubt it will be long before we see a polished development of this system come to market. Docking remains a major source of intimidation for a large number of boaters, and making it easy for even newbies to dock the boat like old pros is in everyone’s interest.