When you need to tow heavy trailers or haul big loads, you need a truck suited to the job. Today’s large family bowriders, pontoons, and cruisers can be a challenge for many trucks demanding the right amount of horsepower and torque to get the job done. The new heavy-duty General Motors trucks make work easier and help you feel more confident behind the wheel as you hit the highways.
When truck engines are working hard to pull your boat up that long hill, the engines have a tendency to be noisy and develop a lot of heat. I found that the new 6.6L diesel Silverado HD is one of the quietest trucks that we have tested as we drove through the Alberta foothills and on to the Waterton Lakes National Park. To make sure the engines could maintain power on long upgrades at high ambient temperatures, the new truck brings in cold dense air from the front to help the diesel breath more efficiently at high altitudes. “It is one thing to generate big power numbers in cool weather, and quite another to maintain power and torque when towing up a long grade on a blistering summer day,” said Jeff Luke, chief engineer.
General Motors invited a group of journalists from different areas of Canada to drive the new Chevrolet and GMC trucks through Alberta’s ranching country with different types of loads, from a 30-foot travel trailer to a fifth wheel horse trailer, to a flat-bed trailer loaded with a farm tractor. 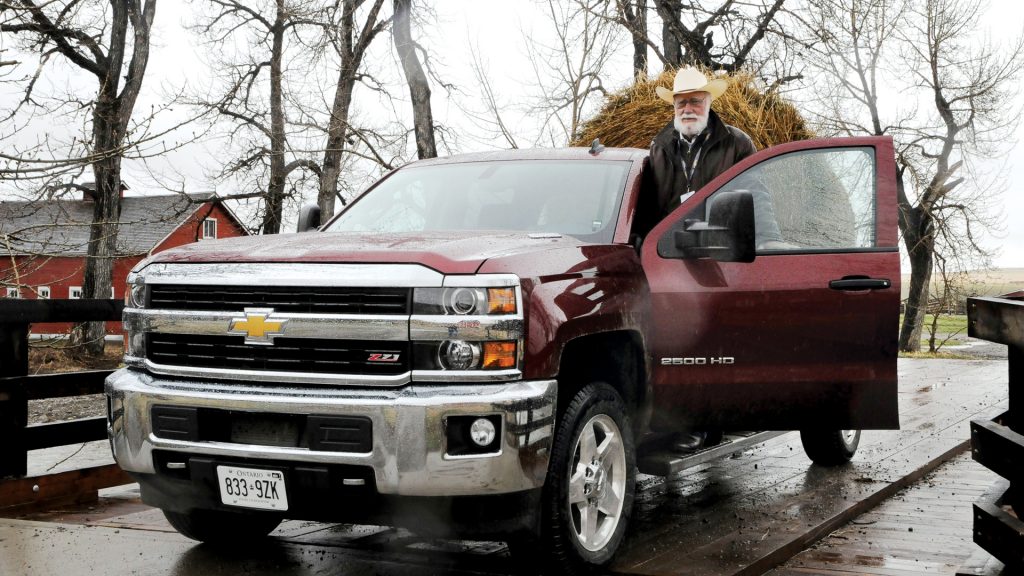 We were able to drive each combination as we traveled south of Calgary towards the US and British Columbia borders in bright sunny weather, rain, and a light snowstorm. If the weather in southern Alberta is not to your liking, wait five minutes and it will surely change! It is often windy in the foothills, regardless of the temperature, and it is possible to have rain, snow, and sun all in the same day.
On our last day of driving, we visited the “Bar U Ranch” near Longview, a National Heritage Site of Canada that originally covered 63,184 hectares (157,960 acres) and had 30,000 head of cattle and 1,000 Percheron horses. In 1991 Parks Canada purchased 148 hectares (148 acres) of the original ranch headquarters to commemorate the history and importance of ranching in Canada and the Bar U’s role in the industry. The ranch still runs a breeding program for Percheron horses and runs a herd of 400 cattle.
The roads that we traveled were dry four-lane pavement, two-lane country roads, freshly graveled roads, and mud. The new GM HD handled each type of road surface without losing traction due to its built-in Electronic Sway Control. In short, the new Silverado HD pickup gets the job done.
Most of the trucks that I drove were equipped with the 6.6L Duramax turbo-diesel engine, but there was also one with a 6.0L Vortex gas engine. Each truck included Auto Grade Braking, Diesel Exhaust Braking, Cruise Control, Integrated Trailer Brake control, and even the 3500 series dual wheel trucks had standard StabiliTrak with Trailer Sway Control. To activate the Auto Grade Braking on either gasoline or diesel Silverado HD, the driver presses and holds the Tow/Haul button in the shifter for three seconds. The transmission will then automatically downshift when needed to enable engine braking to help slow the vehicle. 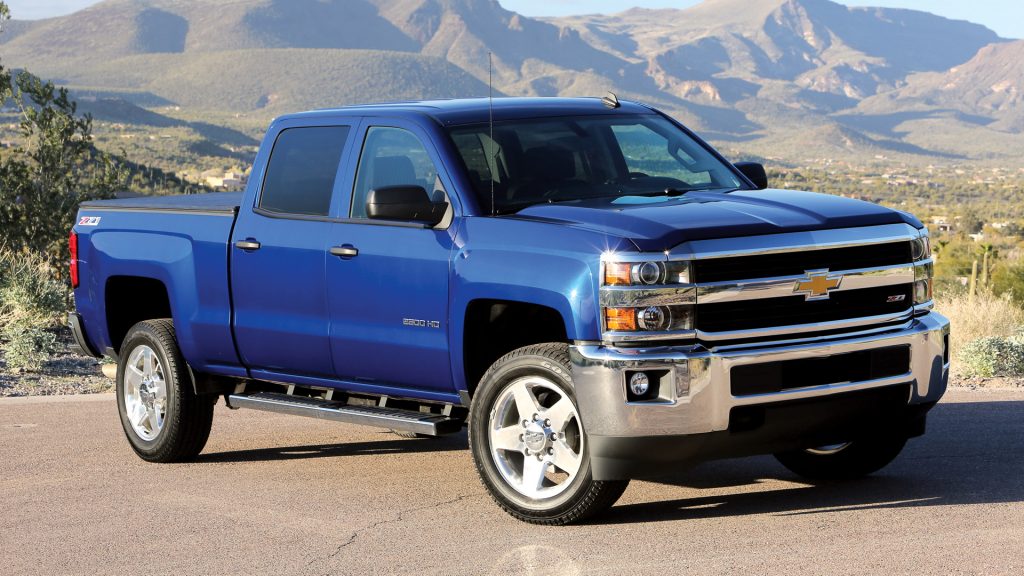 On Duramax diesel models, the driver can also engage the Diesel Exhaust Brake to smoothly and quietly create additional backpressure in the engine to help slow the vehicle. The combination of the exhaust brake and the automatic transmission downshifts helps the driver maintain the desired speed, even on long, steep highway downgrades.
The independent front suspension is specifically engineered for HD pickup use, with forged steel upper control arms and precision machined cast iron lower control arms. Torsion bars are tailored to the weight ratings of the trucks, and allow easier trim height adjustment to account for the weight of snow plows or other accessories.
Rear springs are asymmetrical leaf springs, which balance ride and load carrying and improve control of axle hop. The steel springs, each a full three inches wide, have been proven to perform year after year under the toughest conditions.
The payload for the new HD vehicles has been increased from 2014 going from 7,222 pounds to 7,374 due to the use of fully boxed hydroformed frames with larger cross-sections and high strength steel. The maximum conventional trailer tow rating is 19,600 pounds with the available factory installed trailer hitch, up from 18,000 pounds last model year. The fifth wheel rating is now 23,200 pounds, up from 22,500 pounds.
The Silverado has two powertrains specifically tailored for heavy-duty towing. The 6.6L Duramax turbodiesel and the Allison 1000 transmission combination continue to be available in both the 2500 and 3500 Silverado trucks. Rated at 397 horsepower and 765 pounds-feet of torque, the Duramax engine uses piezo-actuated fuel injectors for superior performance. The Allison 1000 transmission features a driver shift control with tap up/tap down shifting and a Tow/Haul mode that reduces shift cycling for better control when towing or hauling heavy loads.
The standard engine for the HD is a 6.0L Vortex gas V-8 with continuously variable valve timing, matched with a six-speed automatic transmission. It is rated at 360 horsepower and 380 lb-ft of torque on 2500 models and is specifically engineered for low-end torque.
The upright instrument panel, six-gauge instrument cluster and multiple storage options are tailored specifically to the needs of owners who tow on a regular basis. Controls are functional, logically placed and easy to operate – even with gloves on. For example, the available Integrated Trailer Brake Controller is mounted high on the left side of the instrument panel, where it can be easily adjusted, and it displays Gain on the Driver Information Centre in the instrument cluster. 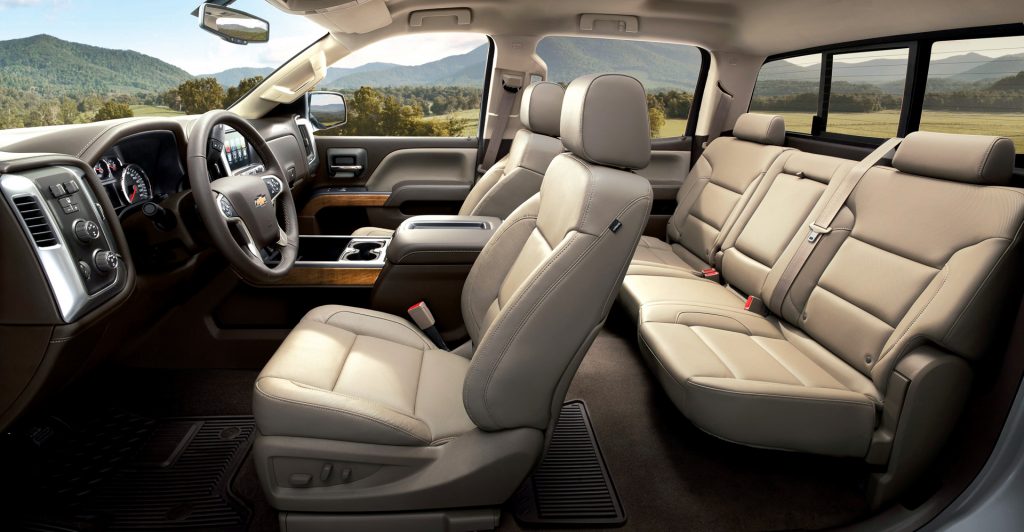 The 2015 HD trucks have new inlaid doors, which fit into recesses in the body side and help reduce wind noise for a quieter cab. The smallest details of the body, such as the roof and tailgate spoiler, were tuned in a wind tunnel to smooth airflow over the truck for reduced noise and improved aerodynamic efficiency.
The CornerStep bumper, combined with hand assists built into the new standard box rail protectors, makes it easier to access cargo in the box, especially useful on HD pickups, with their higher ride height. The box is also available with new upper tie-down hooks, drop-in or sprayed bed liners, under-rail light-emitting diode lighting, and an EZ Lift and Lower tailgate.
Prices for the new 6.0L Vortex powered HD trucks range from $37,290 for a 2500 regular cab to $47,400 for a CrewCab 4×4. Adding the Duramax engine and Allison transmission boosts the price another $11,115.

Big Ticket Items For Your Wishlist