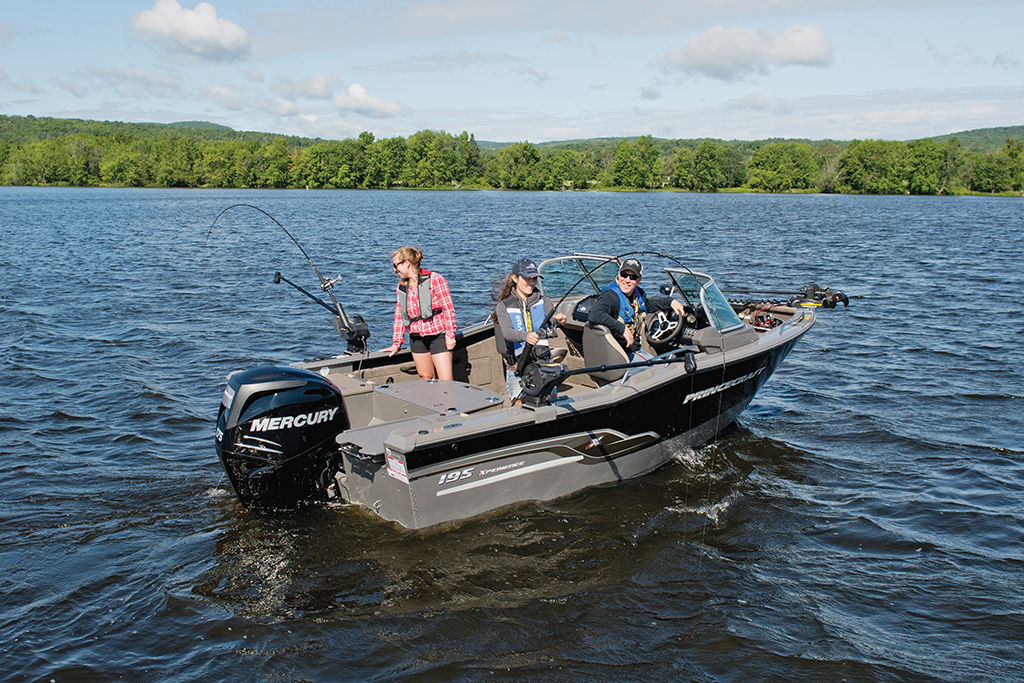 All Princecraft’s hulls are constructed from premium 052-H36 marine grade aluminum alloy. It’s 25% harder than competitor’s alloys and holds its shape better and is more durable over a longer period of time.  It’s also 50% lighter than a fiberglass boat meaning less horsepower is needed to push it to the same speed.  Princecraft boats are riveted throughout the boat – the same way airplanes are constructed to both handle the load and flex as needed.  The double-reverse chine hull design on the 195 Xperience adapts to the boats load and speed.  The outer reverse chine enhances performance at slower speeds or heavier loads. While the inner chine (closer to the keel line) enhances performance when running at higher speeds or with lighter loads.

The dark grey and black exterior hull colour is achieved by applying a high-gloss exterior urethane paint.  Down on the docks at Lac William, while dodging rain storms that came and went that test day, I was impressed with how little the boat moved when I stepped aboard. Hiding my notebook under my coat, I started jotting down unique features of the 195 Xperience.
There’s a large self-draining splash well at the stern that provides ample room for the 9.9hp kicker motor and steering rod to port, and a full-size stainless re-boarding ladder to starboard under a coverplate.  Just forward is a large fish station with Princecraft’s excusive ProFlo™ Plus livewell system, two cupholders and two rod holders. There’s no seatbase in the casting deck, however.
On the floor of the cockpit are two seat bases and a unique storage space for the overhead bimini in front of the step up to the helm and companion seat floor level.  Another step up through the Veralux windshield and you’re on the bow level which features an ice box/livewell with bait bucket, and three storage compartments with aluminum doors. The bow on our test boat was pre-rigged with a MinnKota PowerDrive V2 trolling motor.  The batteries are located under the floor below the lockable rod storage in the companionway. As I walked around the boat, I marveled at both the spaciousness and the stability of the hull.
The wide gunwales that run the entire length of the hull support the ingenious Prince Track system.  This lets the owner add on and position anywhere around the boat they wish a wide assortment of fishing accessories: rod holders, cupholders, and more.
Our test boat was equipped with Mercury’s 175hp Verado with a Vengence 19 pitch prop.  There was also a 9.9 kicker on the transom, with separate helm throttle controls – including electric trim and tilt – and a steering rod from the main engine.  We recorded a top speed of 46mph at 6100 rpm.  I was really enjoying testing this boat and after playing around a while found a wonderful cruising speed of 28mph at 4000rpm. At this speed the engine sound is basically overtaken by the water spray and wind.
My test notes say it’s a very stable hull with a deep feel – it would be great in big or rough water.  The Princecraft design team gets top marks for fashioning a helm where the wheel is centered on the seat (with no-pinch hinges) and for including a cup holder for the captain, and space for aftermarket electronics.
By Brad Roberts