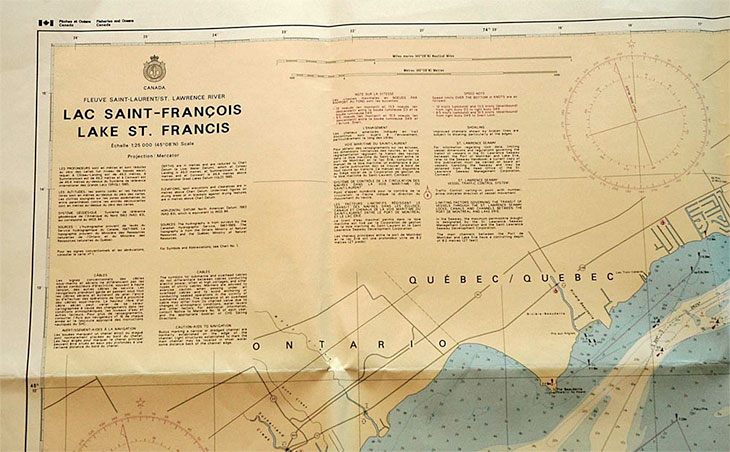 Charting your course for safe navigation

In my last column I introduced the importance of carrying nautical charts onboard your vessel.
It’s not only practical and safe, it is the law. Even though you may have GPS and other electronic devices on board, you must also carry charts of the area in which you are cruising simply because electronics can fail.
A nautical chart contains a large variety of information and as well as having the chart onboard, it is important to be able to read what is on the chart and interpret what that information tells you.
First, a chart will have a title block that contains information such as the name of the chart – which is the area the chart covers, its scale and projection – which generally in Canada will be Mercator. It will have a description which tells you such information as the chart datum and what measure is used for depths. It could have other various warnings and notes pertaining to the area. Near the title block you will find a measure representing nautical miles and metres.
Finally, you will find a Compass Rose to be used for plotting. The Compass Rose will show you True North as well as any Variation that must be applied to compass readings.
Variation is important. It tells you how much off from True North a compass will point because Magnetic North is not the same as True North. Further, because the Magnetic North Pole moves constantly, Variation changes by a certain amount each year. That amount will also be listed on the Compass Rose. For example, Variation may read 015 degrees West 1999 (1 degree W).This tells you that in 1999 when the chart was published, Variation was 15 degrees West. It also tells you that Variation was moving one degree West each year. Therefore in 2001, Variation would be 17 degrees West.
Since Magnetic North moves in different directions over time, you could not count on this being the case forever, which is one reason why it is necessary to update your charts regularly.
In the last column I suggested that you download a copy of Chart 1 and the Canadian Aids to Navigation System. Both of these publications can be acquired free from the Canadian Hydrographic Service web site. Combined, they explain every other detail you will see on your chart.
Chart 1 explains all the symbols you see on your charts. For example, if you are about to anchor, you can check and see what is on the bottom. Are there cables or pipes running underneath the area? What is the bottom – sand, mud, rocks, weeds or something else? Does it become too shallow in the expected area of swing while you are at anchor? If you drag your anchor how much room do you have and what dangers will you encounter nearby?
Chart 1 will show you how to read the bottom depths and find the marked channels. It can show where the water is deep enough off the marked channels to make your way safely.
Using Chart 1 and your chart you will also be able to interpret where you can take your boat to ride out a storm, or in an emergency. If you have to beach your boat you would rather take it to an area with a sandy or muddy bottom with no weeds, than an area of rocks and stones. Or maybe there is a creek or dock nearby where the boat will be protected and your passengers can reach shore safely.
Charts, and knowing how to read them, will help you locate hazards such as shoals, low overhead clearances, currents and other significant dangers. Major structures on shore, such as buildings, steeples, towers and landforms, that are indicated on the chart and explained in Chart 1, can help you maintain your bearings.
Similarly, the codes written on the chart beside the Aids to Navigation tell you what you should be looking for at each Aid. The color of the Aid, the color of light it contains if it has one, and how often that light flashes, are all included on the chart. Any number on an Aid will also be listed on the chart so that you can follow along as you make your way through the water and you will be better able to establish your position in case of an emergency by keeping track of the Aids.
Of course, from the time the chart is published to the time you are using it, things can change. Aids can move, new ones can be added and sometimes, Aids can be removed. It is your responsibility to keep your charts up-to-date. You can remain up-to-date on all this information by following Notices to Mariners, a regular compendium of changes. You can subscribe to the online version or receive a publication regularly in the mail. Access to Notice to Mariners is available here: www.notmar.gc.ca/.
In most areas, the other chart detail that requires daily updated knowledge is water depths. Water depths are based on chart datum, which is a measurement taken on a specific day. The title block of your chart will explain what the depths on your chart are based upon. Of course, water depths are not static.
Daily in the boating season, the Canadian Coast Guard Marine Communications and Traffic Services broadcasts updated information on VHF radio. That information contains the latest Notices to Mariners concerning hazards for the region in question, the current and expected weather forecasts, and water depths which will be based on the Chart Datum.
You can also check current water levels in your region by visiting www.tides.gc.ca/english/Canada.shtml . Using the latest water depth information and adding or subtracting it to the depths noted on the chart, you will have the current water depths and will know whether or not the shoal, mentioned in the last column, is closer to the bottom of the boat than the chart says.

One final word. Small Craft Charts, also known as strip charts, are specialized charts that are published for waterways such as canals and other primarily recreational waterways. They do not necessarily have the same detail as other charts and water depths often must be ascertained by observing shore-based marks and measures at points such as at locks, dams or docks. For example, lock staff maintain a vigilant watch on water depths and can advise you what to expect.
Canals and locks have their own navigational hazards, such as low head dams, which are clearly visible on charts but not necessarily visible on the water. Maintain a sharp look-out and watch your charts while navigating narrow canal cuts and using strip charts.
In the next column I will discuss some of the other publications that you should have on board your boat, until then have a safe and fun summer on the water.

Jun 29, 2021
Columns Facts of Fishing Featured Posts Features How To