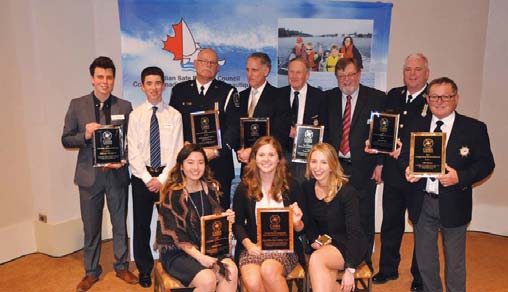 Five individuals and four organizations from across Canada were recently recognized for their outstanding efforts and accomplishments in support of recreational boating safety and environmental stewardship.
The Canadian Safe Boating Awards or “CASBAs” represent the best of what’s happening on and around the recreational waters across this country. On January 10, 2016 the Canadian Safe Boating Council hosted the annual CASBA gala evening in recognition of those who have distinguished themselves in the fields of boating safety and environmental stewardship during the 2015 boating season.  The recipients represent the general boating community, volunteers, professionals, companies and organizations and were selected from a host of nominations received from the public at large from across Canada.
Power Boating Canada congratulates this year award winners:
STEARNS Rescue of the Year: Nicholas Thompson and Ashley Hum
Nicholas Thompson, sailing coach at YMCA Camp Kitchikewana, was working with Ashley Hum on August 12on the waters of Georgian Bay where a number of young campers were sailing.  A boat, with 3 teenagers, was overwhelmed by a strong wind gust which capsized and turtled their boat, entangling one of the teens and trapping them underwater.  The teenager was entangled sufficiently that it took both Nick and Ashley working together to free the camper, who was no longer breathing.  Commencing CPR, together Ashley and Nick were able to bring the camper back and a tragedy was averted.
Ontario Power Generation Best Boating Safety Initiative: WaterWise Boat Safety Team
The Water Wise Team of Sienna Joyce and Maddy Steinwand travelled throughout British Columbia delivering key safety mes-saging in 2015.  Whether working in tandem with other groups or policing agencies, attending community events, media interviews, using social media or going hands-on in the classroom, their focus on boating safety and drowning prevention was WaterWise Wisdom in action. The program, managed by the Lifesaving Society of BC & Yukon, has completed 16 great seasons and continues to expand its reach.
Top Volunteer Dedicated to Boating Safety:  Gary Clow
As a volunteer with the Canadian Power and Sail Squadrons since 1998, Gary has served in a variety of capacities in two Squadrons: as newsletter editor and contributor, executive positions, including Commander, as well as a training officer.  While Gary has given in excess of 2,500 hours of his time, it has been his commitment and drive to develop an on-water course standard that set him above his peers.  While others doubted it was possible, he committed his efforts to transitioning lessons from the classroom to application on the water.
Marine Professional of the Year: Jim Millson
A serving member with the Ontario Provincial Police for over 30 years, Jim has spent a significant portion of his service dedicated to marine policing on the north shore of Lake Erie.  His determination to address the many safety and policing challenges, in particular for “Pottahawk Sunday” (2,500 boats and almost 10,000 people in the water), led to the creation of an operations plan that resulted in no impaired charges, no medical calls or stranded individuals and under 60 tickets laid, despite 600 vessel inspections in one weekend. Jim’s reputation for engaging youth and working with clubs and marine professionals for positive results is admired by his peers.
Safe Guarding the Environment:  CIL Orion
Nobody wants to see expired marine flares dumped in our landfills. CIL Orion in partnership with the Canadian Power and Sail Squadrons has made a significant commitment to ensure these pyrotechnics are dealt with in an environmentally friendly manner.  After a pilot project in 2014, CIL Orion committed to a Canada-wide initiative to dispose of collected flares, regardless of manufacture.  In 2015, over 20,000 flares were neutralized and recycled at their facility in Quebec and it is projected another 50,000 may be collected over the next 2 years.
Visible PFD Wear in Advertising:  York Regional Police – Marine Unit
The York Regional Police Marine Unit is comprised of a group of highly qualified and dedicated marine officers.  Skilled in vessel operations and underwater search and recovery, they are well aware of the benefits of boaters wearing lifejackets and PFD’s.  This past season the team created a series of social media videos and no matter the topic, personal flotation devices figured predominantly.
Media Contribution to Boating Safety: Saatchi and Saatchi
The creative minds at Saatchi and Saatchi did it again!  They embraced the challenge of taking a serious boating safety issue and developed a delivery tool that captures the attention of the audience without diminishing the message.  The creation of two television public service announcements “The Second You Boat While Impaired, You’re a Criminal” were aired nationally on Fish’n Canada in 2015.
Special Recognition Award:  Chris Foster
While Chris Foster served as a police officer for 35 years, it was in his tenure as a marine officer with the Ontario Provincial Police that his passion for public service shone.  While duty required him to investigate a variety of calls; from onboard domes-tics, break and enters, lost or stranded boaters, to collisions and unfortunately fatalities, his desire to enhance the boating experience was his expectation.  Chris dove into his role with marine student selection and training, was a sought-after speaker and was featured in local television series, all the while maintaining a high level of enforcement with a focus on reducing impaired boating incidents.
The Canadian Safe Boating Awards Recognize Those Who Make Boating Better for All.  The safety and enjoyment of some 15 million Canadians on our waterways every year is due in large part to individuals and organizations like these. Recognizing them is important, and telling their stories will hopefully inspire others.
For more information visit www.csbc.ca