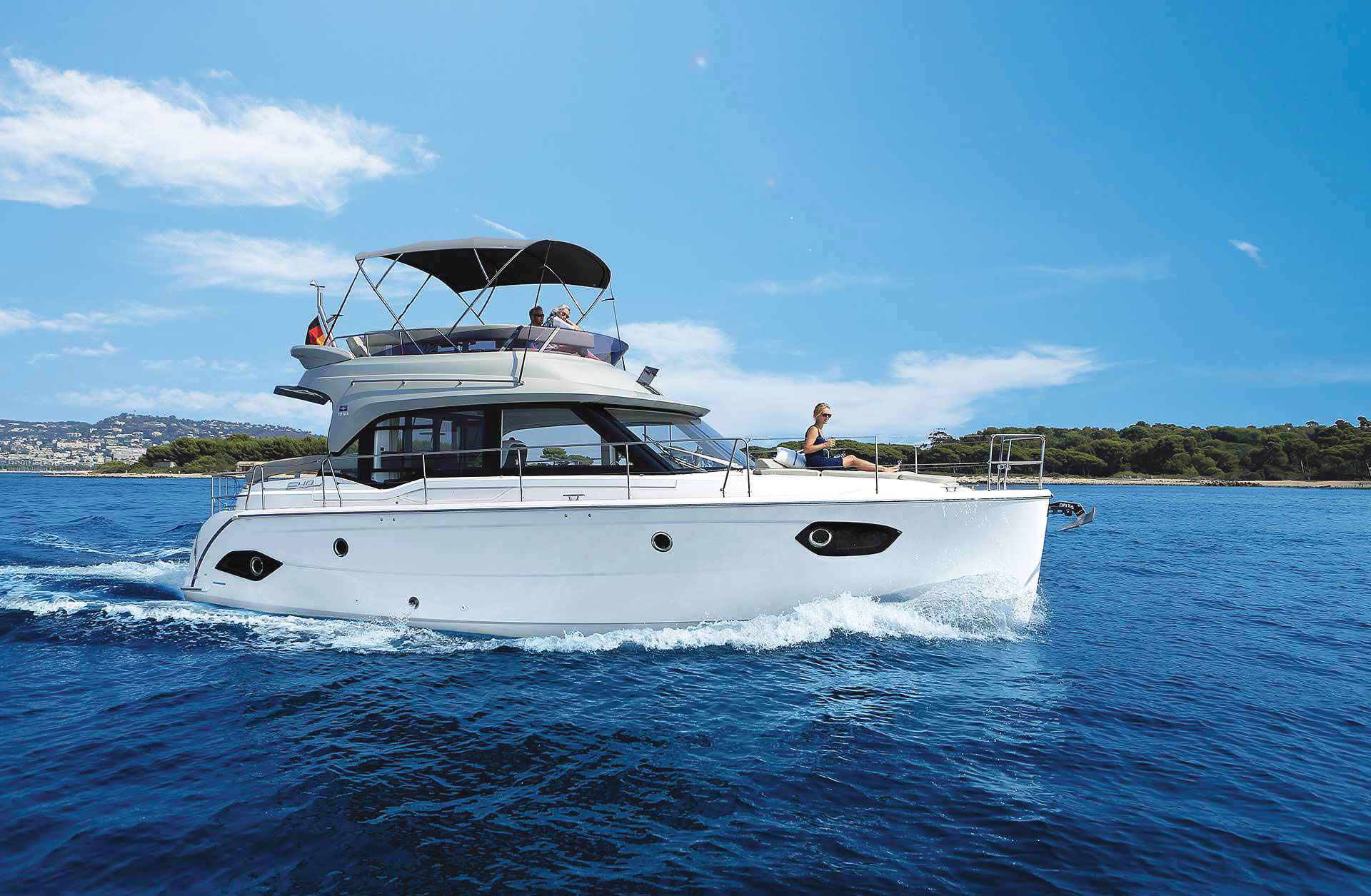 The “E” stands for Efficient 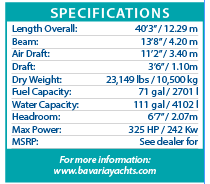 The Bavaria E40 Fly is the latest motor yacht from the German builder and was recognized this year as the “European Boat of the Year” in 2017. Bavaria may be better known for their sailing yachts, but they have a sizable stable of motor yachts.

The influences on this new model from its sail-powered siblings are clear. The style and location of the lower helm are one of the more notable features. It’s in the main salon, where you would expect to find the helm on a flybridge boat, but it’s a pedestal helm, located on the centerline of the boat, at the aft of the cabin. The cabin is wrapped with large windows, meaning sightlines out from the helm seat are good, and there’s room on the bench for a couple of passengers to keep the captain company.

The secondary helm is up top, mounted low in front of a wide, double helm seat. It’s complete with its own multifunction display. There’s plenty of additional seating up top for passengers. Access to the flybridge if from a centrally mounted ladder from the aft cockpit.

The aft cockpit is raised, owing to the large aft cabin beneath. Seating wraps around the entire cockpit, save for the entry to the main cabin and an opening center aft that leads to the transom. The swim platform lowers from the transom when it’s in use. Boarding the E40Fly while the swim platform is lowered is simple and easy.

When it’s folded up, boarding is a bit more complicated. There are shallow steps molded into the corners of the transom and a teak ladder that can be positioned over the gunnels on either side to facilitate boarding.

The main cabin in the V-berth is spacious with plenty of storage. There are porthole windows on either side that let in natural light and can also open for fresh air. The main head is a split design, with a separate shower compartment opposite the toilet and sink. The aft cabin is equally spacious and has extra headroom, thanks to the design of the raised cockpit area above. It’s also outfitted with opening portholes for light and air. There’s a second wet head adjacent to the aft cabin.

The Bavaria E40 Fly will comfortably sleep two couples for an extended cruise with the two-cabin floorplan. The boat can also be ordered with two smaller aft cabins, further increasing its usefulness by allowing a third couple to join the trip. It also turns the E40 Fly into an excellent family cruiser by offering separate cabins for the kids.

Beside the aft cabin, you’ll find the access door to the engine compartment which houses the E40 Fly’s 325-hp Volvo Penta D4-300 diesel engine. The single-engine can push the E40Fly along at a top speed of about 15 knots and holds a steady cruise at about 10 knots. It’s also quite happy to chug along for endless hours at displacement speed, which gives this boat an 800-plus mile range.

The new Bavaria E40Fly from isn’t a speedboat. Everything about this design is targeted toward long-distance, coastal cruising. If displacement cruising is your thing, you can drop the D4-300 for a much smaller D3-150 or an even a D2-75. Neither will let this boat break into double digits, but either would expand the E40Fly’s range even farther.

Bavaria has blended several popular sailing yacht features into its new motor yacht and the result is an efficient, well-equipped, award-winning design sure to capture attention on this side of the pond.