King for a Day – Beneteau combines luxury and range in the new Swift Trawler 47.


When Beneteau set out to design its new Swift Trawler 47, the company didn’t want to just take an existing model from the popular line, stretch it, update the interior and call it a new model.
Instead designer Pierangelo Andreani was tasked with creating a fresh design while preserving the classic lines of the family cruiser. The result is the beautiful Swift Trawler 47, a versatile powerboat perfect for months-long exploration of coastal regions or going on sunset cruises with friends and family.
“I think Swift Trawler does a great job of not making scaled versions of each boat. Each boat is distinctly different,” said Justin Joyner, powerboat manager for Beneteau America. “This is a different Swift Trawler, but again, I think it maintains the DNA.”
Beneteau introduced the Swift Trawler line 15 years ago, offering five models from 30 to 50 feet. The Swift Trawler 47 fills a gap in the lineup and the French builder has plans for one more Swift Trawler model, said Aurore Bordage, marketing manager for Beneteau America.
The 14-meter boat debuted at the 2018 Cannes Yachting Festival and already has strong demand from dealers and customers, Joyner said. Beneteau has an 11-month backlog for the Swift Trawler 47 but once full production is ramped up, the timeframe should be six to nine months, Joyner said.
“We sold out our production line immediately before we brought the boat to market,” Joyner said. “Literally all the dealers said, ‘Yep, I’m in.’”
It’s easy to why dealers are bullish on the new model after Beneteau provided marine journalists an opportunity to run the Swift Trawler 47 in St. Petersburg, Florida. The Swift Trawler stood out among the yachts in the marina outside the historic The Vinoy Renaissance hotel.
The Swift Trawler comes with a pair of 425-horsepower diesel Cummins QSB 6.7 engines and with a full tank (1,930 liters), the cruiser offers incredible range without sacrificing comfort. The well-equipped model tested in Florida retails for $988,000.
Beneteau offers only one engine package on each Swift Trawler model. That ensures a perfect center of gravity, Joyner said, and the engine compartment is designed to allow maximum cabin space on the lower deck. The boats are built to European Union CE Certification standards.
“At Beneteau’s core, we’re a sailboat company. What do sailboat companies have to do? Design boats that run through the water efficiently,” said Joyner, noting the boat checks in at nearly 28,000 pounds dry. “We figure out a running surface—there are no engine options in this boat. Its hull, its engine, all one package and designed to be as efficient as possible.”
One trait of the Swift Trawler models is that the boats have little to no bow rise. Running on the protected waters of Tampa Bay, the Swift Trawler 47 quickly reached its top speed of 28 knots and easily mashed the wind-fed chop. Owners will appreciate the boat’s construction as there were no rattles while running in the bay.
The Swift Trawler 47 can be piloted from the main deck or the flybridge. The helm on the main deck offers nearly 360-degreee views of the water, air conditioning and shelter from the elements. Beneteau designed the station with two large Raymarine screens that can be used to keep tabs on the diesel engines, while the other screen had a chart plotter.
Joyner said Beneteau worked with Cummins France to develop proprietary software, eliminating the SmartCraft digital technology. Beneteau plainly labeled all potential error codes so operators can decide if the problem warrants an immediate trip to the local dealer. (Beneteau provides a full three-year warranty on the yacht.) 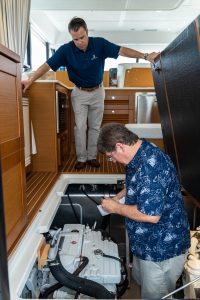 Users can control the lights and boat systems from the helm station. With a good Wi-Fi connection on the yacht, the systems could be started remotely from a tablet but Beneteau does not currently recommend it.
The electronic throttle-and-shifter was smooth and responsive in bringing the V-bottom boat on plane and for maneuvering around tight marinas. A joystick-controlled bow-and-stern thruster simplifies the docking process. The pilot’s bench seat can be flipped up to increase visibility whether underway or around the docks.
We expect most owners will spend plenty of time on the flybridge operating the boat. The helm has similar electronics as the main deck helm including Raymarine screens, bow thruster controls and electronic throttle and shifter. The helm’s pedestal seat was adjustable and firmly secured to the nonskid deck.
Beneteau offers the Swift Trawler 47 with or without a hardtop. Buyers would be smart to spend the extra money for the hardtop, which did an excellent job shielding the pilot and passengers from the elements. For those who want more sun, a fabric shade in the center of the fiberglass hardtop can be drawn back to let in more light.
One thing Joyner says buyers won’t find on the flybridge is Isinglass.
“In the new-boat business, Isinglass is literally a bad word,” Joyner said. “You don’t put it on the boats anymore and that’s why we have that functional helm down there so when the weather is not nice, like it was pretty much until about an hour ago, we just ran from down below.”
The spacious flybridge also has facing L-shape lounges and an expandable wood table, a great spot for enjoying a meal at sunset. Beneteau included a prepping station and a Dometic refrigerator on the flybridge, reducing trips to the main deck for cold drinks.
Most of the buyers will do their entertaining on the main deck, and opening the sliding glass windows makes the salon feel substantially larger. Guests can hang out on the starboard lounge and watch meals being prepared in the galley. Beneteau equipped the Swift Trawler 47 with a ceramic cooktop and convection microwave oven, but is also available with a propane cooktop and oven. The builder also included two refrigerators, a sink and a large food prep area.
An add-on swim platform extends the usable space at the transom. The platform can accommodate a dinghy weighing up to 750 pounds. Another feature we liked was how quiet the genset was while socializing at the dock. Most systems eject the water off the side of the boat, while the setup on the Swift Trawler 47 sends the water below the waterline.
The beautiful wood cabinetry is done in-house by Beneteau to control quality, Joyner said. If a door or panel is damaged, it can be easily replaced. “We can replace that piece with the exact same finish, it’s the exact same grain and it will look exactly like it did before you put your foot through it,” he said. “It’s not like you have to go find the tree in that part of the Amazon to get the grains right, it’s all very uniform stuff.”
Beneteau maximized the space in the lower deck with three cabins and two heads, including a separate shower. The main cabin forward has a full-size bed, ample stowage and windows with portholes inset to let in natural light and air. The cabin to port has two single beds, while the starboard cabin sleeps two and will likely be for the kids. Buyers will love the air-conditioned standup shower compartment.
Much needed for extended voyages, the builder installed a Splendide washer-and-dryer combo in a cabinet on the starboard side.
Joyner said the Swift Trawler line is designed for consumers who want to spend days on the water at a time. 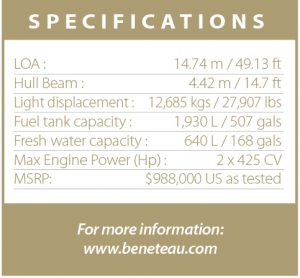 “This is the boat that the enlighten boater buys when they have decided that they want to go long distance,” Joyner said. “I have learned you can’t take for granted what that means, because to some people long distance is two weeks on a boat, sometimes it’s two months, sometimes it’s two years. Those are both very different (buyers) but whatever it is, that’s the dream.”
Share:
Keyword : Beneteau, swift trawler 47, Yacht Test Beneteau, swift trawler 47, Yacht Test