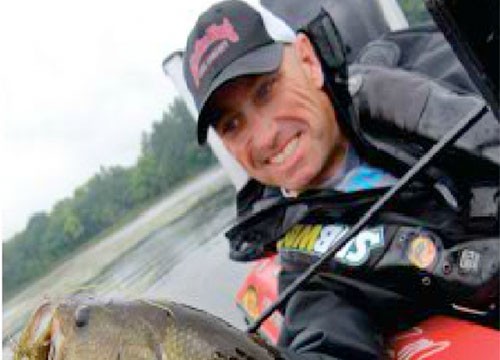 By: Dave Mercer
from issue 27-5
Okay – think back to when you were a kid, for some of you that might be a tougher task than for others. At one time or another in our childhood, we were all at a party and experienced this next emotion I’m about to explain. Whether you want to classify this emotion as panic, greed, or just a natural emotion of competition, we’ve all experienced it… the need to get the last one. It doesn’t matter whether it’s a bowl of chips, popcorn, candy, or pizza. When it first comes out, everyone gets along nicely. But then it all changes when that bowl of popcorn gets down to the last few kernels, there is always two or three kids feverishly grasping at the final few pieces like it was the last meal on Earth.
But that feeling doesn’t just happen for us. That very same instinctual behavior happens below the water and it is happening right now. Don’t get me wrong. I’m not saying that fish have parties, popcorn or pizza. But every fall they feel that exact same instinct to eat before it’s gone.
In Fishville, the last few months basically have been a party to them.  Throughout the summer months, living is easy and food is readily available.  But once the colder weather arrives, the Fishville Feeding Fiesta ends and living gets a whole lot tougher.
Don’t get caught thinking its doom and gloom. This is actually a good thing because the fall is simply one of the best times of the year to fish. No matter what you are fishing for, every fish knows that things are about to change. As soon as the day’s starts to get shorter, they know, “I need to eat and I need to eat NOW.” That instinct, paired with the fact that just about every body of water gets less traffic (or fishing pressure) simply makes the fall my favorite time of the year to fish.
Just because the fish are willing to eat and there’s less pressure on the lake doesn’t mean that you can just bomb your bait in the middle of the lake and expect to get bit by Bass-quatch. Where you choose to fish is probably more important this time of the year than any other time of the year. One of the reasons fall fishing is so good is because the fish get grouped up. Which basically means that there are some areas that have a ton of fish, but that also means that there are a ton of areas that have no fish. If you’ve read this column in the past, you have heard me say countless times to fish in the weeds. That is where the fish live and that is where you want your lure to be.
In the autumn months, it is no different. You do want to fish in the weeds. But this time of year, not all weeds are created equally. The two major reasons that fish like weeds is #1 it allows them an ambush point, and #2 weeds produce oxygen in the water.  Both of these are paramount in a fish’s survival. However, once the days get shorter, some of these fresh, green, oxygen-producing weed beds begin to turn brown and die.  Dead and dying weeds no longer produce oxygen and ultimately no longer become home to fish.  But once again, that negative becomes a positive to us anglers.
In the summer months, the only way to find out if a fish lives in a particular weed bed is to fish it and this can take a whole lot of time. Now, Mother Nature does us the favour of basically showing us where the fish are. Autumn anglers can easily idle their boat around looking for fresh green weeds. Find the green weeds and you will find the fish.