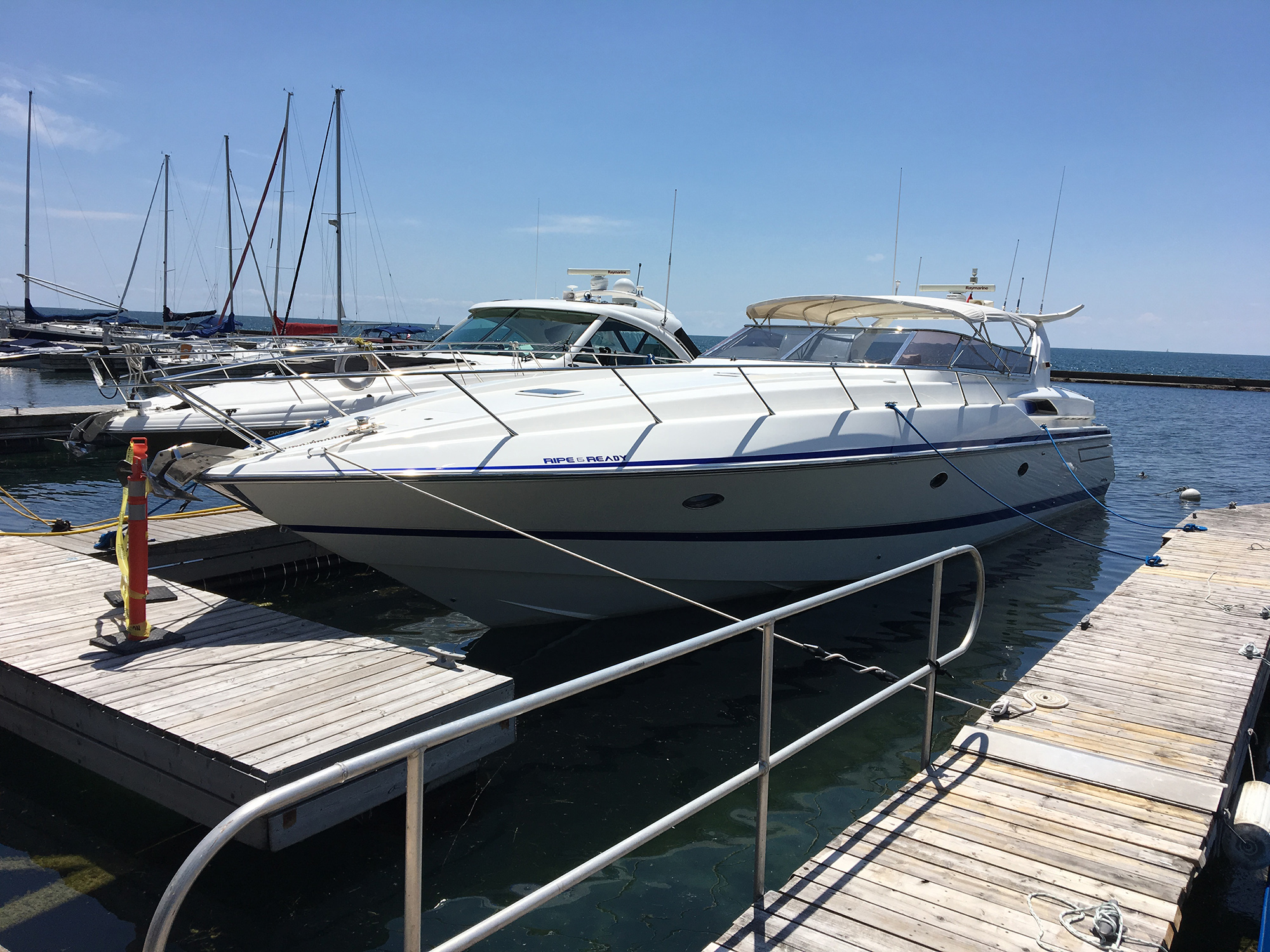 A different skill set than props

What comes to mind when you hear the words, “jet boat”?
I recently skippered a yacht from Toronto to Jacksonville, Florida on a rare and unique jet boat – a British designed 1993 Sunseeker 60 Renegade. Now, I don’t normally do deliveries or write about them, but the allure of running south on a 60-foot jet boat was too great to pass up. It was also a good topic for this column: Compare the handling characteristics of a 60-foot jet boat to a 60-footer with props.

At first glance, you wouldn’t know this is a jet boat until you spot the two massive Italian-designed jet drives at the stern. Powered by two twin turbo 1100 hp MAN diesels, its a beast of a boat that sounds like a Greyhound bus on steroids. Lean into the throttles and the turbos kick in with the whine of a jet plane – very cool.

Now, I’ve taught numerous clinics on jet boats in the 18-24-foot range and always love spending time on these nimble speedsters, but I literally had no idea what to expect when I first took the helm of this Miami Vice-looking cruiser. I was curious how it would handle around the docks and inside the many narrow locks on the trip, so I arranged a sea trial to figure things out before departing for Norfolk, Virginia.

At the start of the sea trial, I pulled away from the T-dock at Toronto’s beautiful Boulevard Club in my usual manner for a large vessel: set the wheel, cast off, a brief sideways push from the bow and stern thrusters followed by short shifts until clear. What first caught my attention was that the boat stopped quickly when shifted to neutral. In comparison, a prop-driven boat will continue to drift with somewhat of a predictable decay in momentum. But this massive drive system sucks in so much water that it turns the boat into something of an upright vacuum when shifted to neutral. A few additional short shifts helped to clear the dock.

Next up, a standing turn towards the marina’s fairway. With the wheel centred, I shifted port forward/starboard reverse for a starboard rotation that was noticeably slower than one would get with props.  Adding power was an option, but I held off.  During a later twin engine rotation, I tried throwing the wheel hard over in the direction of the turn and it worked brilliantly.  I wouldn’t do this with twin inboards, but I quite often do so with twin stern drives for a more efficient spin. Once pointed at the fairway, I shifted both engines forward to check for idle speed and steerage characteristics.

No boat tracks straight for long when drifting in neutral. Outboards and stern drives will hold course longer than jet boats when drifting because the drives hang below the transom and provide some rudder effect. Any jet boat I’ve ever operated (including PWCs) required being in gear for steerage. With the Sunseeker 60, I quickly found the best solution for speed and steerage control in close quarters was to run on one engine with a quick wheel-hand. Two engines in idle forward was simply too fast in the marina. It also worked somewhat to centre up the wheel and go with just the sticks as with prop drives, but if you did lose the bow it was near impossible to pull it back without the wheel.

Getting up on plane required full tabs and a slow but steady power-up to avoid cavitation in the jet drives. This surprised me at first, but its all part of learning your boat and adjusting accordingly. At just under full throttle, the rooster tail was impressive as the drives pull in some 32,000 gallons of water per minute (twice the amount of water in a typical back yard pool)! Pulling back from 40 to 28 knots kept the boat on plane and the fuel burn more reasonable for what would be our 200-mile Atlantic Ocean runs.

Sometimes its easiest to short-shift a big boat to the dock and finish with bow and stern thrusters. Tempting, but this was a test to do it without thrusters or the wheel. I approached slowly for a side-on docking using the shift and drift technique. The biggest challenge was not losing the bow between shifts as there is no rudder effect with jet drives. A few more short shifts were needed for steerage than is typically required on a prop drive. I also noticed that following a final shift to neutral, the boat did continue to slowly creep forward as many small jet boats do. I quickly shut down the engines to stop the water flow and tied off.

My first opportunity for a stern-in docking was in Norfolk, Virginia with 20 knots of wind on the back. I stopped in front of the slip and rotated on two engines with the wheel hard over. Centering the wheel, I shifted both engines into reverse and crept backwards. Here is where the jet drive’s standing vacuum characteristic helped. A little off-line to the dock, I shifted to neutral at the top of the slip.  With this stopping the boat, I made a few final adjustments with a thruster and then backed in on both engines.

Debris such as weeds and drift wood can be sucked into jet drives and this happened several times to us on the Erie Canal and Hudson River. We never saw the pieces of driftwood before getting sucked into an impeller housing and were unaware of it until feeling a vibration on throttle-up. Gordon (the yacht’s owner) turned out to be quite good at diagnosing and fixing problems. The quick 10-minute solution was to shut down the engine, open the impeller housing with a socket wrench, then reach down past the impeller to retrieve the debris. Fortunately, neither occasion caused damage.

Stepping into the throttles of a 2200 hp turbocharged jet boat is exciting to say the least. With a top speed listed at 45 knots (faster than many prop driven boats of this size) it was no problem to settle in at a cruising speed of 28 knots. Where I did notice a difference from prop drives was on the Atlantic with a 5 ft following sea. On plane, the boat occasionally slow down in the troughs as it worked to climb the back of the wave in front thus taking us off-plane. But the speed always returned after a few moments. I’ve never noticed this happening with a prop drive.

As mentioned earlier, 60-foot jet boats aren’t common, and neither are some of their handling characteristics. The 14-day trip south through Oswego, Erie Canal, Hudson River, Intracoastal Waterway and the Atlantic Ocean was a terrific opportunity to learn about a unique boat under a variety of conditions. Overall, I think it takes more work to become proficient at handling a jet boat in comparison to prop drives.  But like I always tell my students, learn your boat by getting out there and practicing, and don’t hesitate to call a professional instructor for help.

By Craig Hamilton
Capt. Craig Hamilton is a Master Instructor at BoaterSkills.ca.
You can reach him by email at craig@boaterskills.ca